An apple falls from a tree and misses a seated Isaac Newton.

A letter from “The Sublime” is addressed to “The Ridiculous.”

Nurit Karlin’s simply-drawn cartoons, mainly for The New Yorker magazine, were subtle sight gags, rendered largely without captions. It was a familiar approach to New Yorker readers, who had long known the work of Saul Steinberg. But in Ms. Karlin’s case it was coming from an unusual source: When she began contributing to the magazine in 1974, she was the only woman in the ranks of its cartoonists, long a largely male preserve.

“She told me once, ‘I used to doodle. And then something came out,’ ” Liza Donnelly, a New Yorker cartoonist whose book, “Funny Ladies” (2005), examined the history of female cartoonists at the magazine, wrote in an email. “Hearing that, it was like her pen line came directly from her brain. You can see it in her drawings. Her ideas did not feel contrived, never like a crafted joke.”

Ms. Karlin drew whimsical but thoughtful cartoons: an office worker sitting in what is actually one of his desk’s drawers; a lumberjack peering at a heart pierced by an arrow carved inside the rings of a felled tree; a harpist taking his bows on a concert stage with the strings of his instrument dangling from one hand.

Ms. Karlin, who was born in Jerusalem, died at 80 on April 30 in a hospital in Tel Aviv, where she had been living since the mid-2000s. Her niece Alma Cohen-Wardi said the cause had not been determined. 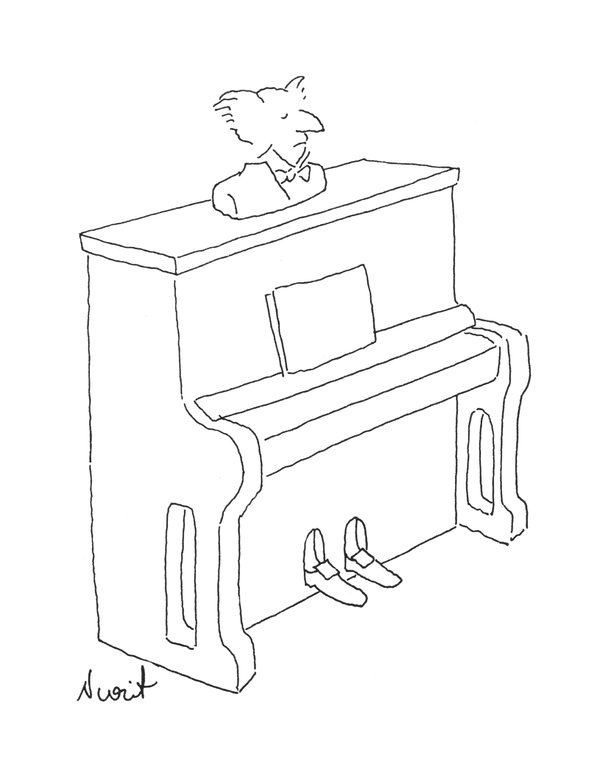 When Ms. Karlin began contributing cartoons to The New Yorker, she followed a few other women, including Mary Petty, who had worked for the magazine for 39 years until 1966, when her last contribution appeared on its cover.

But the magazine had no other female cartoonists until 1974, when Ms. Karlin was hired, and she was the only woman drawing cartoons at the magazine until Roz Chast came aboard in 1978 and became one of the magazine’s most popular cartoonists. Other women have since become contributors as well.

Lee Lorenz, the former art and cartoon editor of The New Yorker, said there had not been any pressure to take on a woman when he discovered Ms. Karlin’s cartoons as unsolicited submissions.

“I was always looking for original points of view and distinctive personal styles,” he said in a telephone interview. “And she had both.”

Ms. Karlin was born on Dec. 26, 1938. Her father, Aminadav, was a banker, and her mother, Deborah (Stern) Karlin, was a homemaker. She graduated from the Bezalel Academy of Arts and Design in Jerusalem and studied animation at the School of Visual Arts in New York. Early on she sold drawings to The New York Times before submitting cartoons to The New Yorker.

“Every once in a while I would bring something and Lee would say, ‘I’m not sure I get it,’ and I would try to invent an explanation,” Ms. Karlin said in an interview in “Funny Ladies.” “Sometimes it worked and sometimes it didn’t.”

Ms. Karlin published a collection of her work, “No Comment,” in 1978. She stopped contributing to The New Yorker in 1988 after beginning a second career writing and illustrating children’s books, like “The Tooth Witch” (1985) and “The Dream Factory” (1988), which gave her the chance to communicate in words, albeit to a very different readership than The New Yorker’s.

“Anchoring the book, which is narrated by two kittens, is the word ‘seesaw,’ ” the reviewer wrote, citing Ms. Karlin’s playful, tongue-twisting use of the word. “ ‘Look, a saw,’ says one kitten. ‘I can see the saw,’ replies the other. ‘I can saw the seesaw.’ But a frog gets the last lick: ‘And I saw you saw the seesaw.’ ”

“The Dream Factory” features an insomniac sheep whose grandmother takes her on a journey to a factory, where a flock of sheep produce dreams shaped like clouds.

“Using bright, cartoonlike images,” Publishers Weekly wrote, “Karlin has transformed the phrase ‘counting sheep’ into a fresh and funny bedtime story sure to lull the most reluctant sleeper into dreamland.”

In an interview in “Funny Ladies,” Ms. Karlin said she found illustrating books easier than drawing cartoons. With illustrations, she said, the problem is “defined; you just have to find a solution”; but with cartooning, “you also have to create the problem.”

Ms. Karlin, who never married and had no children, is survived by her sister, Dina Wardi. She dedicated some of her books to Ms. Cohen-Wardi and another niece, Ada Wardi.

After retiring about 13 years ago, Ms. Karlin returned to Israel and joined Yesh Din, a group that protects the rights of Palestinians living under Israeli occupation.