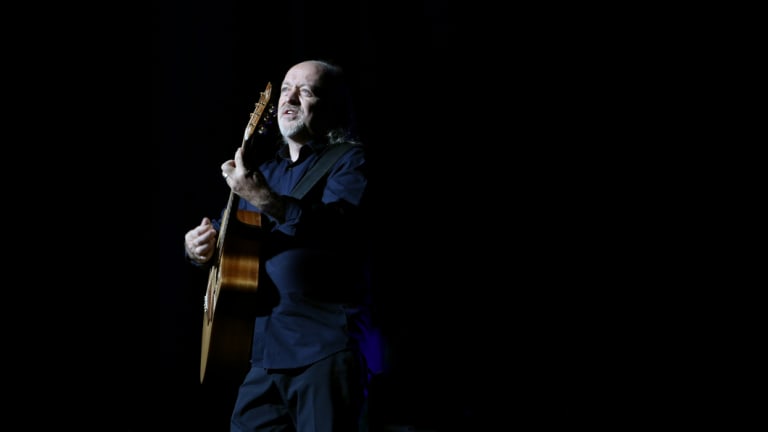 Bill Bailey is getting older. His flyaway mane, once a rusty ginger, has turned decidedly white.

He has lost none of his manic energy, however; in fact sometimes he talks so fast it’s hard to catch it.

In his latest show, Earl of Whimsy, the British witmaster delivers two hours of solid laughs, which start early and get even more forceful in the second half.

There is indeed plenty of whimsy in this show: from his trademark bizarre observational humour, to the peppering of virtuosic and hilarious musical skits, each played on a different instrument. (The new-aged “hand pan” is a revelation, and he gleefully presses an automatic “jazz button” in a comedy emergency, switching the mood to cool, calm and collected.)

His enduring love for birds manifests in a walk-through of bird calls in pop music and film, and there’s even a bit where he gets the audience to sing the hallelujah chorus as he opens a household pedal bin.

There’s plenty of more meaty subject matter, too, like Brexit or Australia’s revolving door prime ministry. They might be typical – predictable, even – fodder for a comedian but there’s no one quite like Bailey to highlight the ridiculous in the familiar. His Donald Trump impression, which involves combing over his own wondrous locks, has no words and needs none. He even meanders into #MeToo territory before diffusing the tension with an anecdote of what he’s learnt not to do in his own marriage.

There are a few recycled bits from previous shows, including a rendition of Smoke on the Water played entirely on cowbells, and the amusing impersonation of musicians with the “rock tongue” (extended a-la Kiss) substituted by one dorkily stuck out to the side in concentration. But they're still funny – indeed they’re just bits rather than jokes with a long set-up, which is typical of Bailey’s playful, almost scatterbrained style.

Age may not have dulled Bailey’s energy but he’s the first to admit he’s getting grumpier. Early in the piece he divides the audience into generational groups – recent nappy wearers, upbeat Millennials, middle-aged grumps and smug elders.

He lays bare the hazards of his own shortening fuse in a frustrating encounter with airport security that quickly gives way to confused British politeness. His perplexion at Twitter and YouTube feels more typical of David O’Doherty or indeed his Black Books co-star Dylan Moran, who memorably delivered a show several years ago on the same stage at Hamer Hall while smoking a cigarette.

Bailey’s default mode is one of indignant incredulity – at the world, at himself. Yet it’s delivered with an endearing and infectious warmth despite it all; a sense that, really, he loves life and the world and music and people. And, of course, birds.