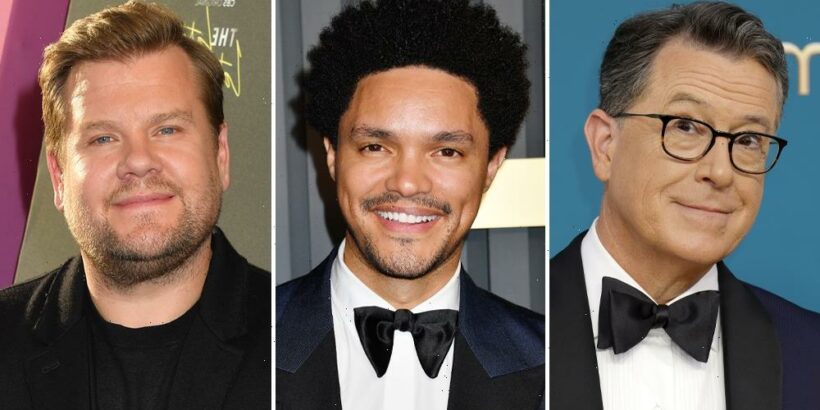 Less than a year ago, Paramount Global found a new reason to cheer about the midnight hour.

In December, the company did something few of its competitors could do: It struck a deal with Google to have three different late-night hosts weave a promotional message about the search-engine giant into their programs. On the night of December 15, Stephen Colbert, James Corden and Trevor Noah all nodded to Google during CBS’ “Late Show” and “Late Late Show” and Comedy Central’s “Daily Show.” The ad deal represented a vote of confidence in a sturdy portfolio of late-night programs that spanned broadcast and cable.

Now, a good chunk of the talent in that collection is gearing up to move.

Paramount is facing the exits of both Trevor Noah and James Corden, just as scrutiny of late-night TV is beginning to match that of its counterparts in primetime. It’s no secret that streaming is eroding live viewership of “NCIS” and “Chicago Fire.” Now, it is also eking away at the traditional ways in which people watch their favorite wee-hours programs. A younger consumer may be more likely to sample last night’s Jimmy Fallon clip on YouTube than to watch it as part of the hour-long “Tonight” show on NBC or might come upon Jimmy Kimmel’s most recent stunt by scrolling through Twitter, rather than staying up past midnight to see it on ABC.

Noah stunned his “Daily Show” staffers, according to three people familiar with the matter — even executive producer Jen Flanz was not prepared — when he revealed last week that he intended to leave Comedy Central’s signature program in the not-too-distant future. Jill Fritzo, a spokesperson for Noah, and Norm Aladjem, his manager, declined to comment. The network has yet to reveal a timeline for his departure. Corden has already announced that he expects to cut away from CBS’ “Late Late Show” sometime in spring. The network is already contemplating new concepts to put on in his place.

Both CBS and Comedy Central have navigated the drama of late-night succession in the recent past. Corden has made CBS’ 12:30 a.m. slot a much broader attraction than the one previously minded by the offbeat Craig Ferguson. Comedy Central, meanwhile, has succeeded in making “Daily” more focused on younger viewers, with Noah and his faux “correspondents” able to weave diverse perspectives into their take on the news cycle, perhaps more successfully than the show’s previous host, the estimable Jon Stewart.

The issue? Any change to mainstay late-night programs in this era threatens to extinguish a TV-viewing habit when viewers have a dizzying array of new choices. Gone are the days when people had to watch an entire hour of TV after the late news to see everything that might happen. Stephen Colbert’s monologue, Jimmy Fallon’s latest celebrity game, Jimmy Kimmel’s newest batch of “mean tweets” — all can be sampled in the morning with a few deft maneuvers on social media. The producers at late-night shows often monitor social traffic to see which bits hit (and might be candidates to become shows of their own) and which ones need not surface again.

Even so, the business of late-night TV remains an essential part of the modern media mix. The ads cost less than they do in primetime, giving pharmaceutical and tech companies reason to buy commercials that still tend to reach a younger audience for significantly lower costs than they do in “Grey’s Anatomy” or “The Voice.” Consider that the average cost of a 30-second ad in Colbert’s “Late Show” in the first 10 months of 2021 was $21,511, according to Standard Media Index, a tracker of ad spending. A 30-second “Daily Show” spot during that period cost an average of $9,884, while a 30-second commercial in “Late Late Show” had an average price of $4,745.

It all still adds up to big bucks. National advertisers put more than $35.2 million against “Daily Show” in 2021, according to Kantar, a tracker of ad spending, nearly $26.8 million into “Late Late Show” and more than $124.7 million behind “Late Show.” What’s more, the hosts are increasingly willing to do commercials as part of the show, or weave, say, Samsung products or a pharmaceutical spokes-owl into a segment.

Keeping the nocturnal activity is key for Paramount. In recent months, NBCUniversal, arguably in charge of one of the best late-night collections in TV, got out of the business of running original programing at 1:30 a.m. The company used to run Carson Daly, then Lilly Singh in that time slot. No longer. The company is also not as active as it once was in boosting smaller late-night programs on cable, where Andy Cohen holds sway on Bravo. Efforts to find a successor to Chelsea Handler’s “Chelsea Lately” on E! have not really gained traction.

In recent months, NBCU has seemed willing to experiment with the business of late-night, at one time proposing to air its “Tonight” and “Late Night” on its Peacock streaming service ahead of their runs on linear NBC. There has also been speculation after a recent report in The Wall Street Journal that NBC might consider airing its late-night programs earlier in the evening — a feat once attempted with Jay Leno in 2009.

Streaming offers the genre no guarantee of success. Subscribers to Hulu, Peacock, HBO Max, Netflix and the rest gravitate to the hubs because they can watch whatever they want as they see fit. You don’t need to stay up late to catch an episode of “Saturday Night Live” or “Late Night With Seth Meyers.” But late-night shows thrive on current events and of-the-moment interviews, and their relevance fades quickly after each episode is put in the can after an early-evening live taping. Many streamers have tried to crack the code — Hulu with Sarah Silverman; Netflix with Chelsea Handler; Apple with Jon Stewart — and largely failed.

With all that at play, Paramount needs to keep its shows going.

At “Daily Show,” some of the program’s team of supporting comics are now in the spotlight, with two people familiar with the matter suggesting correspondent Roy Wood Jr. or contributor Jordan Klepper (who once hosted a program after “Daily”) might be considered to succeed Noah. Kirsten Ames, Klepper’s manager, did not respond to a query seeking comment, nor did Aladjem, who also represents Wood. “In time, we will turn to the next chapter of ‘The Daily Show,’ and all of our incredible correspondents will be at the top of that list,” Comedy Central said in a statement. “Until then, we are focused on celebrating Trevor and thanking him for his many contributions.”

CBS’s plans for the “Late Late” timeslot have already started to come into focus. Executives at the network have considered replacing Corden’s distinctive program with a multi-host panel, according to people familiar with the matter, a concept that might not be as pricey as one that uses a talented single host and accompanying band.

No matter who sits next in those two shows’ chairs, one thing is clear: The machinations behind TV programming around midnight are just as complex as those around the stuff that runs earlier in the day.