Parents share a heartbreaking photograph showing them saying a final goodbye to their daughter, five, just hours before she lost her life to brain cancer

The devastated parents of a child who lost her life to a brain tumour have shared a heartbreaking photo of their final goodbye with their little girl.

Zoey Catherine Daggett, five, from Fairport, near New York, died on July 4th, two years after being diagnosed with the deadly growth, known as a diffuse intrinsic pontine glioma tumor.

Her mother, Casey Daggett, revealed that the image was taken just hours before Zoey passed away, after she spent her final day lying in her parents’ arms with Harry Potter and the Prisoner of Azkaban on the television. 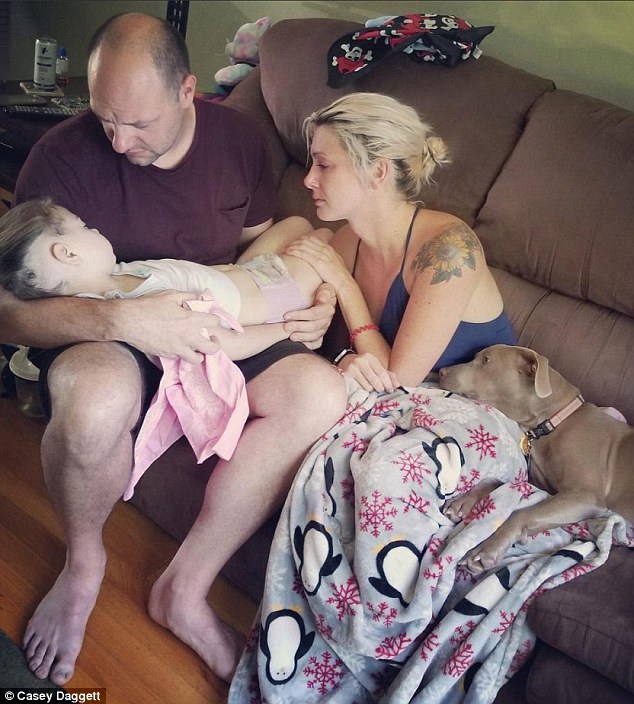 The emotional photograph shows Ben and Casey Daggett cradling their daughter Zoey, five, in her final hours before she succumbed to a devastating brain tumour on July 4th – two years after being diagnosed

Zoey died half-way through the film, said her father Ben.

Casey explained to local newspaper the Democrat and Chronicle: ‘We’ve had two years to prepare for this but it’s never – it’s never enough.’

The schoolgirl was diagnosed two years ago, in July 2016, after she fell at a playground and began walking with a limp.

A week later she couldn’t move one of her arms and tests revealed that she had a rare tumour that strikes children between the ages of four and ten. Survival rates for the condition are currently less than one per cent. 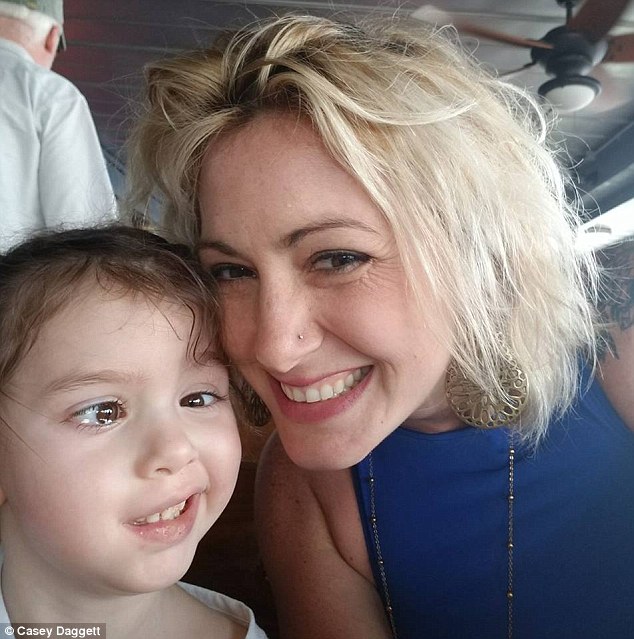 The five-year-old’s deadly tumour was discovered when she was just three, in July 2016, after she fell in a playground and began limping…just weeks later she was unable to move her arm 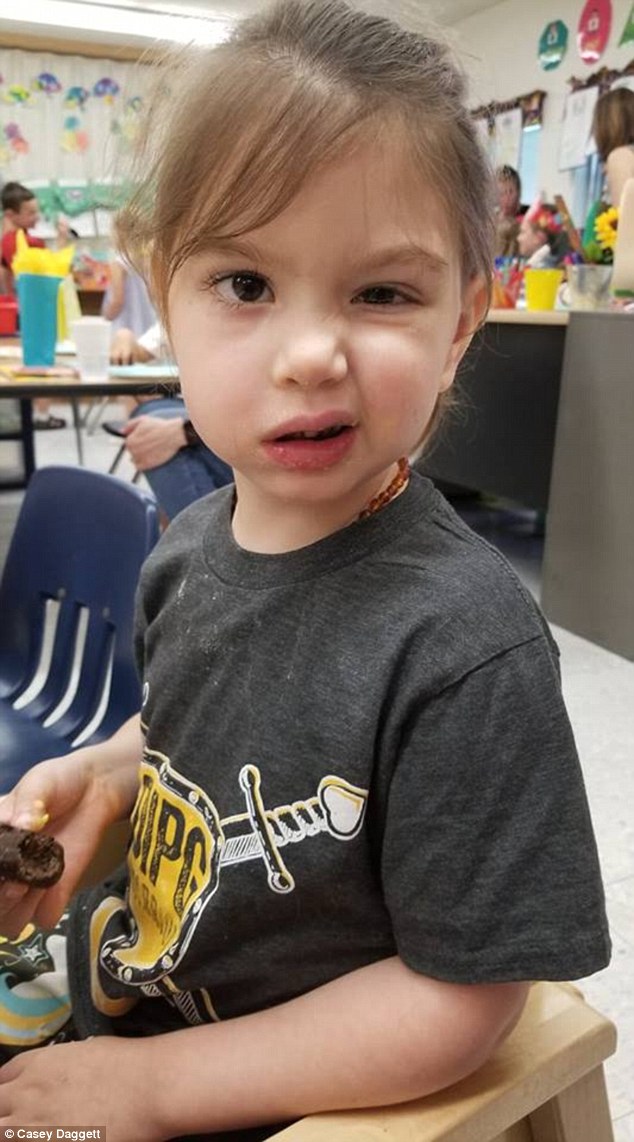 While Zoey had undergone multiple treatments to extend her life, she stopped responding to radiotherapy a month ago and her condition quickly deteriorated.Her parents revealed that their fun-loving daughter even named her tumour, calling it ‘brain boo boo’.

In her memory, Ben and Casey have had soundwaves of Zoey saying ‘I love you’ and ‘not today’ – a life-affirming line from Game of Thrones – tattooed on their arms.

Diffuse intrinsic pontine glioma (DIPG) is a rare type of brain tumour that can’t be operated on because of it’s location within a crucial part of the brain, called the pons.

This area is responsible for a number of critical bodily functions, such as breathing, sleeping and blood pressure.

The high-grade brain tumour, which mostly affects children, tends to grow quickly and often spreads to other parts of the brain or spinal cord.

Most diagnoses occur in youngsters between the ages of five and 10. The cause of the tumour remains unknown.

More than 90 per cent of its victims will die within 18 months of diagnosis, according to figures.

One of the early indicators of the cancer is a child falling, tripping or losing balance. 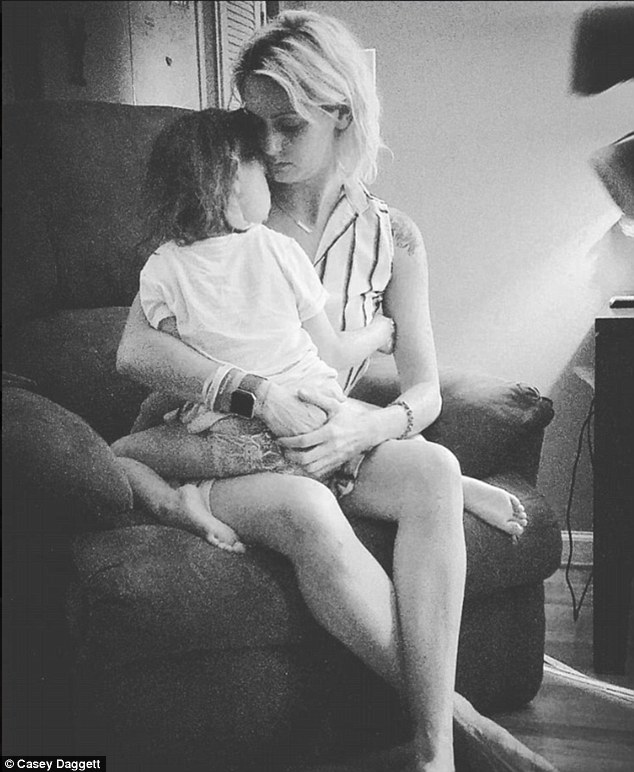 The devastated family, who lost their little girl on July 4th, say she brought ‘light to every single room’ 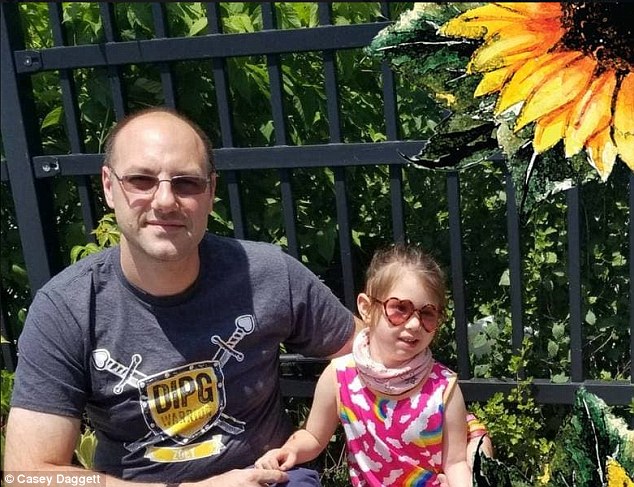 Zoey with her father Ben; most diagnoses of the brain tumour that Zoey had occur in youngsters between the ages of five and 10

Said Casey: ‘She was just this tiny little person that brought light to every single room and every single occasion.’