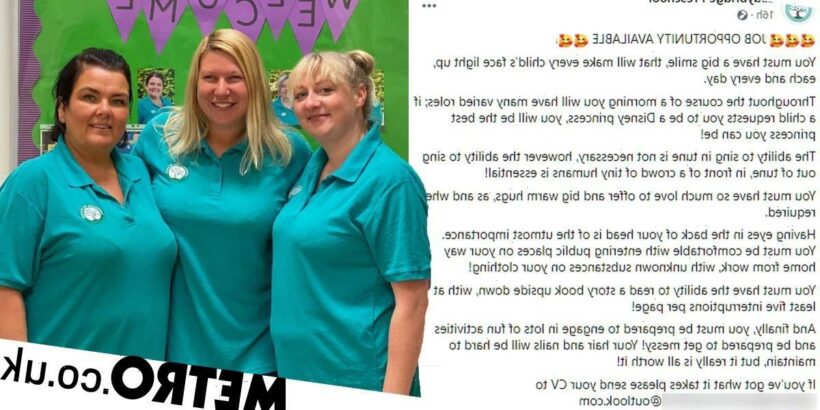 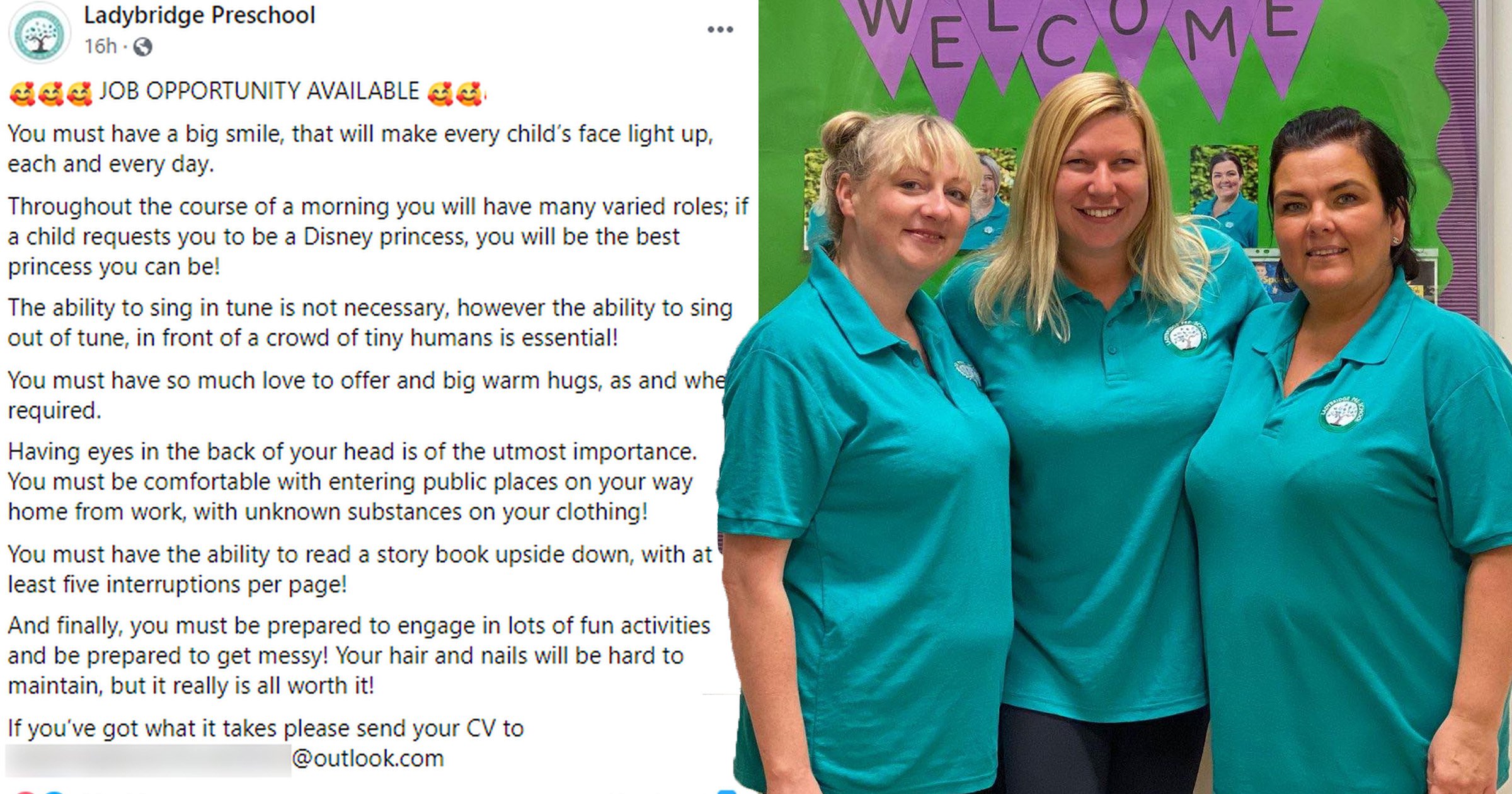 Would you work a job that requires you have ‘eyes in the back of your head’ and promises that, while ‘your nails and hair will be hard to maintain’, it will all be ‘worth it’?

A cheeky job advert for the role of preschool worker declares that the successful applicant will have to fill ‘many varied roles’ including being a singing Disney princess.

Hopefuls must also be able to ‘read a book upside down’ and be comfortable leaving work covered in ‘unknown substances’.

Jordan Jackson, owner of Ladybridge Preschool, based in Bolton, Greater Manchester, decided to spruce up the job description by showcasing the fun sides of the job, stating employees should have ‘a sense of humour’ and ‘a big smile’.

In addition to the ability to sing in or out of key ‘in front of a crowd of tiny humans’, staff must have ‘big warm hugs’ to offer, a talent for planning exciting activities and making the children’s ‘faces light up every day’.

Since posting the ad, the 30-year-old says she’s been inundated with applications from eager job seekers who’ve loved the honest wording that doesn’t shy away from the ‘messy’ reality of working with children.

Jordan, from Bury, Greater Manchester, said: ‘I was hoping to attract someone kind-hearted with a sense of humour. You have to have that.

‘Our staff are all like this. They’re energetic, bubbly, very outgoing. We try and make the setting a home-from-home – as happy as we can.

‘[The post] shows them through the child’s eyes and what they see. We’re extremely child-led.’

When it comes to what kinds of things staff do to keep the children entertained and happy, Jordan said the kids love finding toys hidden in shaving foam.

‘On Tuesday we had a pyjamas party for Crackerjacks, a charity for special education needs children,’ she went on.

‘We then made vegetable soup to get into the autumn term.

Jordan, whose day-care centre looks after children aged two to five, added: ‘They love to get really messy. We also have a mud kitchen.

‘It’s about having as much fun as they can in different environments. Teachers get quite messy too by the end of the day.

‘We also have an annual paint day so the children and staff end up absolutely covered in paint.

‘We have sing-a-long songs every single day and there’s a lot of role-playing with the teachers.

‘They’ve got to have a great imagination.’

Jordan was inspired to write the ad this way after seeing a similarly playful one written by nearby Moorland Day Nursery, based in Horwich, Bolton, last month.

Having since been ‘inundated’ with applications, she hopes her ad will inspire others in turn.

Jordan said: ‘I was surprised by the reaction online. We have been inundated with applications which is great.

‘I hope it inspires them. We’ve had so many applicants, and it’s worked.’

Comments left by social media users echo the success of the ad, with one person saying: ‘Congratulations to whoever wrote this advert – it’s fabulous.’

Another wrote: ‘This is the best advert ever.’

What do you think? Should more job ads be this honest? Let us know in the comments below.