Peter B. Kaplan, a photographer who captured spectacular views from vertiginous vantage points like the torch of the Statue of Liberty and the masts of the Empire State Building and the original World Trade Center, died on March 19 in Wilmington, Del. He was 79.

His wife, Sharon R. Kaplan, said the cause was interstitial lung disease, which she attributed in part to his inhaling debris in Lower Manhattan after the terrorist attacks of Sept. 11, 2001.

Mr. Kaplan first experimented with his gravity-defying birds-eye panoramas long before the advent of drones, extended selfie sticks and permissions for helicopters to hover close to skyscrapers.

He persuaded architects, developers and public officials to let him immortalize their buildings and monuments on film in altitudinous detail. He would scale precarious perches with construction workers and point his lens toward the ground hundreds of feet below, or mount his camera, sometimes equipped with a fisheye lens, on poles as long as 42-feet, so that he could snap the shutter remotely and even photograph himself.

Mr. Kaplan’s route to aerial photography was serendipitous. With his dyslexia going undiagnosed as a boy, he had struggled with reading and math in school; photography became an ideal means of self-expression.

He later discovered photography’s potential for visceral firepower. When he showed his first wife and a neighbor a picture had taken from the Empire State Building’s observation deck by thrusting his camera beyond the barrier and pointing it straight down, they both became queasy.

He also had to overcome his fear of heights, which he had had little opportunity to confront while growing up on Long Island.

In the introduction to Mr. Kaplan’s first book, “High on New York” (1985), Paul Goldberger, then the chief architecture critic for The New York Times, wrote, “These unusual pictures combine the skill of a professional photographer, the perception of a fine painter and the daring of a trapeze artist.”

Mr. Kaplan’s photographs were featured on commemorative stamps for the Statue of Liberty Centennial in 1986 and appeared, among other places, in his book “Liberty for All” (2002).

He was protective of his work, loyal (he helped establish the Marty Forscher Fellowship to honor a master camera repairman) and relentless.

“Nothing — including sometimes us — stood in his way,” said Stephen A. Briganti, president and chief executive of the Statue of Liberty-Ellis Island Foundation. Mr. Kaplan chronicled the monument’s restoration in some 125,000 photographs over a decade.

He “gave the Statue human qualities and characteristics which reflected his deep reverence and obsession for his subject matter,” Sharon Kaplan said. 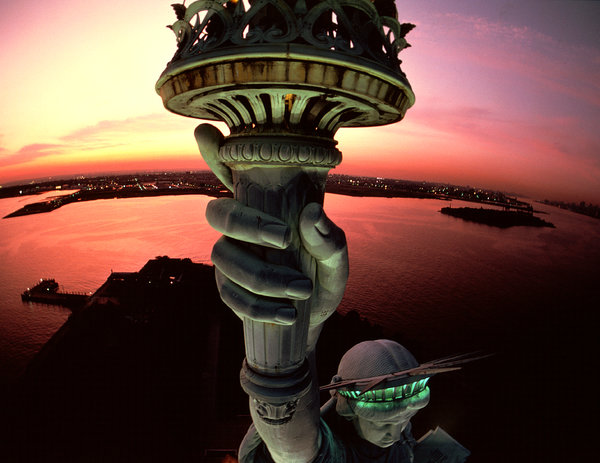 That he had in some ways internalized the statue’s torch-carrying was illustrated in the title he gave his signature photograph, “Liberté Mon Amour,” and by his choice of a middle name for both of his children: Liberty.

Peter Benjamin Kaplan was born on Sept. 29, 1939, in Manhattan to Dr. William and Lillian (Block) Kaplan. His father was a founder of what is now North Shore University Hospital on Long Island; his mother was an artist and sculptor.

His marriage to Harriet Avramescu ended in divorce. In 1985, he married Sharon Rosenbush on a platform on the 96th floor of the Empire State Building. (Their wedding bands were made of surplus copper from the Statue of Liberty’s reconstructed torch.)

Since 1995, the couple had lived in Hockessin, in northwest Delaware.

Mr. Kaplan’s photographs have appeared in exhibitions in New York at the Museum of Modern Art, the International Center for Photography, the New-York Historical Society and the Skyscraper Museum, and in Washington at the Smithsonian Institution, among other places.

They were also enclosed in time capsules to commemorate the construction of the Brooklyn Bridge, the Chrysler Building, the Statue of Liberty and the Empire State Building.

Beginning decades ago, even when security was looser and Mr. Kaplan was fortified by $5 million in liability insurance, he would often have to spend months negotiating for dispensation to clamber up scaffolds, bridge cables and antennas.

He spent 12 harrowing days photographing the installation of the nearly 400-foot-tall antenna of the North Tower of the World Trade Center in New York.

“I built my name and reputation on safety and doing things legally, with permission,” he told Shutterbug magazine in 2007.

Mr. Kaplan’s perspectives included the peaks of the Gateway Arch in St. Louis, the Golden Gate Bridge in San Francisco and the Verrazzano-Narrows Bridge linking Brooklyn and Staten Island.

One vantage point evaded him: the Eiffel Tower.

“In the mid-80s, when it was coming up to the 100th anniversary, I wrote to the manager of the tower, the one man who could grant permission,” Mr. Kaplan recalled. “I told him who I was and what I’d done, especially my work photographing the Statue of Liberty. He wrote back, ‘No.’ ”

“I’m sure he wondered who I was that I could get the mayor of Paris and the president of France to act on my behalf,” Mr. Kaplan said, “but it didn’t matter to him. He still turned me down.”