He’s still the master! Graphic designer who has earned viral fame with his VERY literal take on people’s Photoshop requests returns with another round of cheeky creations

A graphic designer who has become famous for his very literal interpretations of people’s Photoshop requests is continuing to keep the internet entertained by releasing another round of hilarious picture edits.

James Fridman, who was born in the UK but now resides in the US, has been leaving social media users in stitches for years now with his literal interpretations of people’s editing requests, which he shares on Instagram – where he has racked up an impressive two million followers with his antics.

The Photoshopping pro shares collections of his quirky creations every few weeks, and recently unveiled the latest batch of picture transformations on Bored Panda – once again hitting the ball out of the park with his very amusing alterations.

Here, FEMAIL reveals the latest round of images that James has trolled his followers with – from flaming violins to animalistic additions to photo subjects. 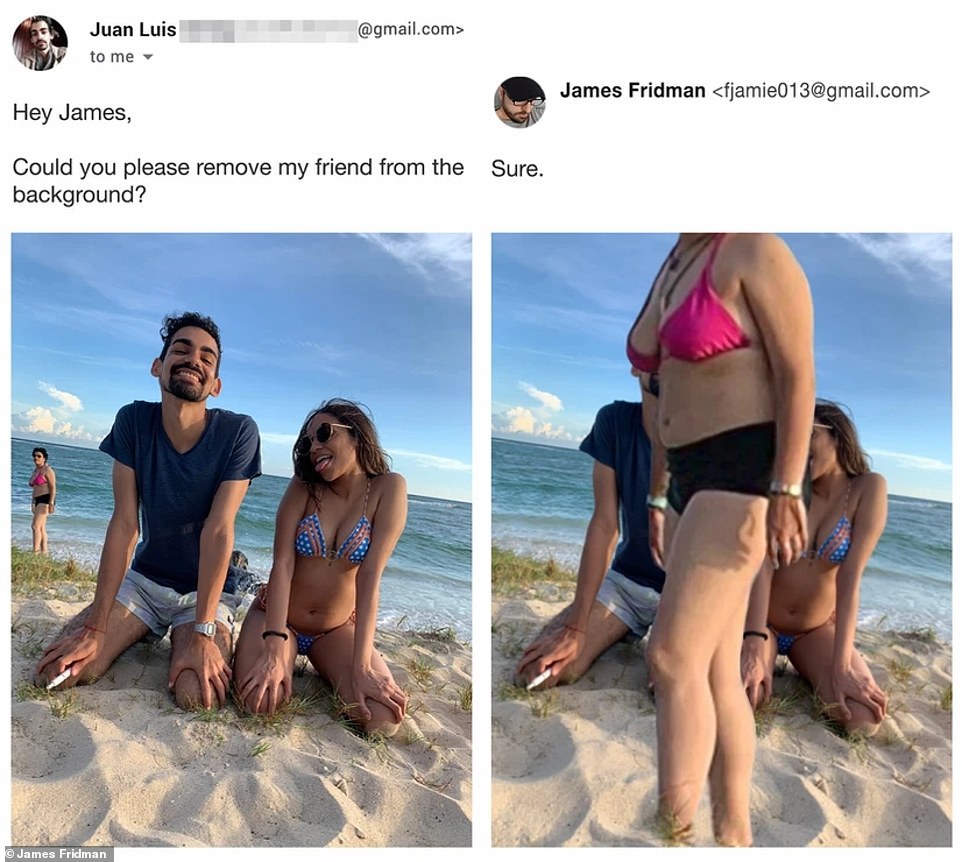 Whoops: After one person requested that a woman in the background of his photo was removed, James decided to take her away from her original spot – and plonked her right in front of the two people posing 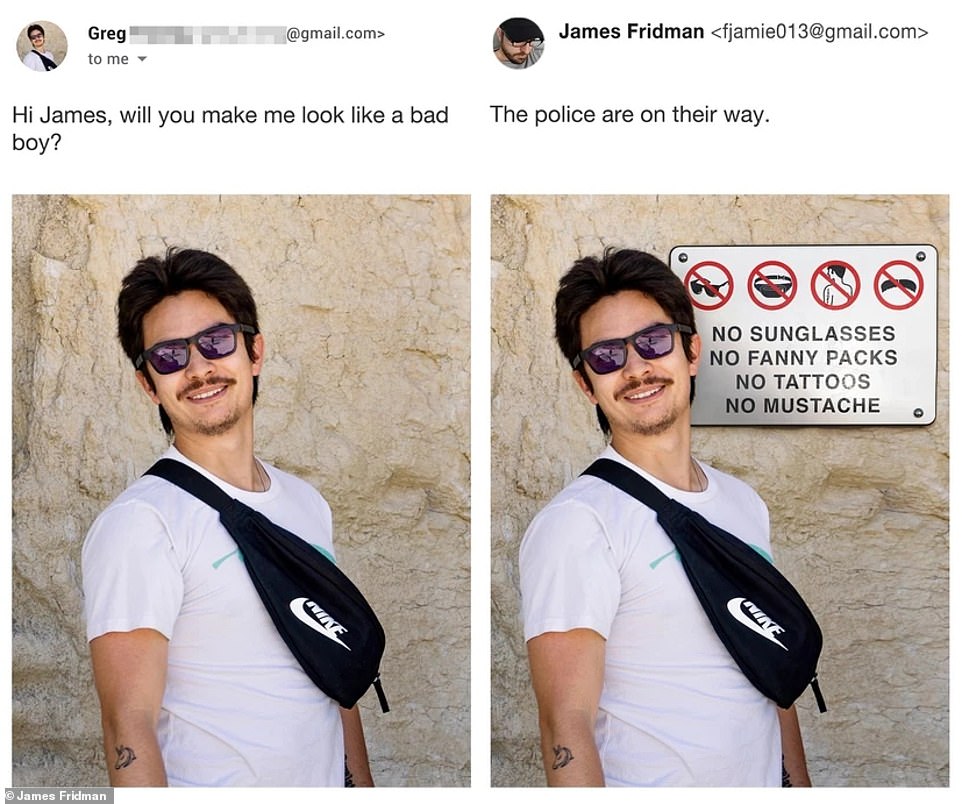 He’s in trouble: In response to this man’s request to look ‘like a bad boy’, James added a regulation sign in the background of his photo banning everything about his look 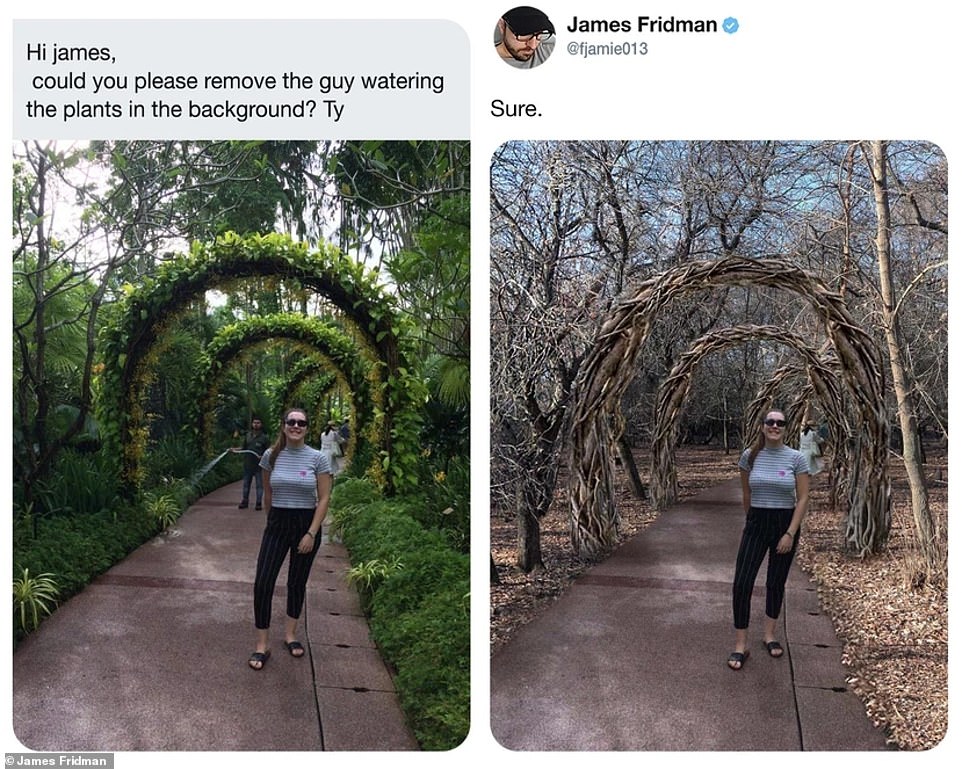 The grass isn’t always greener! One woman requested that James edit out the gardener in the background of her snap, which the graphic designer did – while also removing all of the greenery 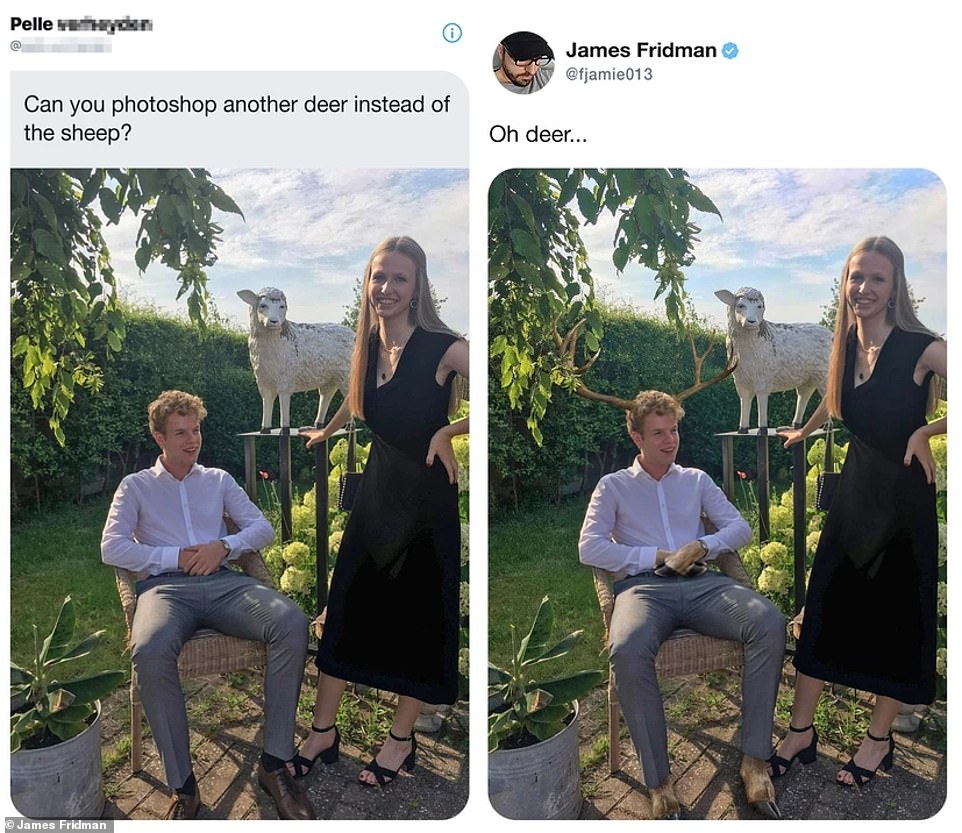 Oh deer: James gave one man more than he bargained for after receiving a request to transform the sheep in this snap into a deer. Instead, the Photoshop pro added a pair of antlers to the man in the snap 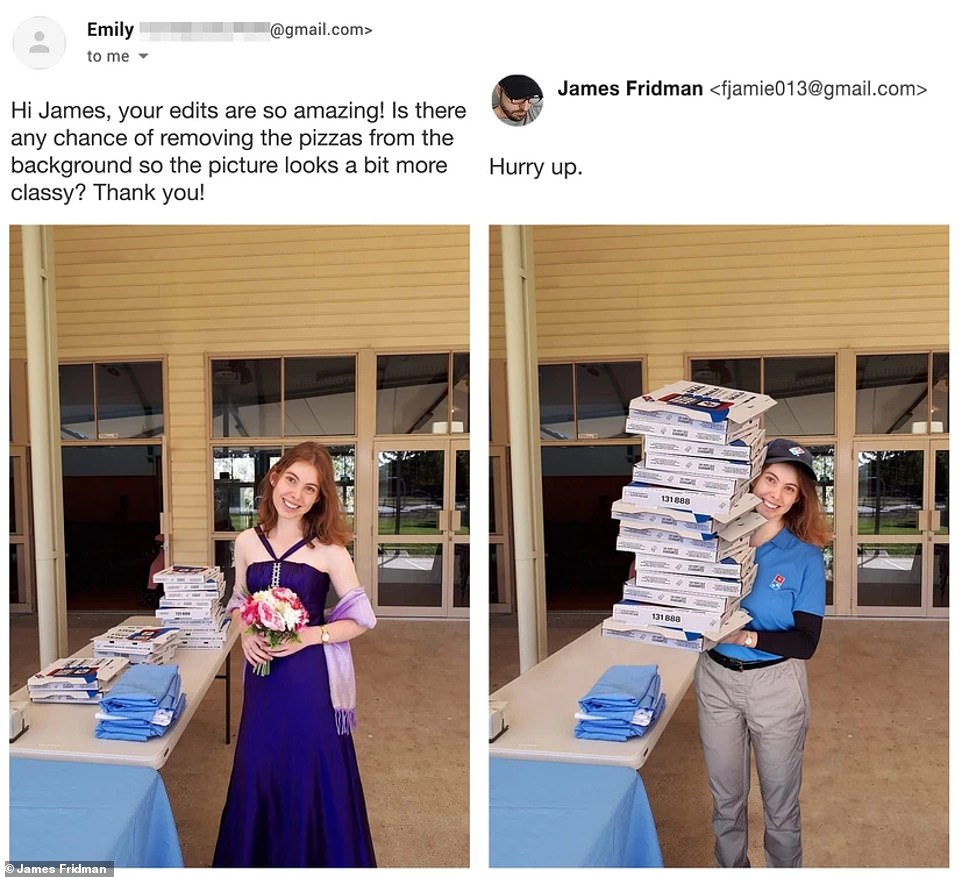 Get it while it’s hot! James transformed one woman into a Dominos delivery girl when she requested that he remove pizza boxes from a table alongside her 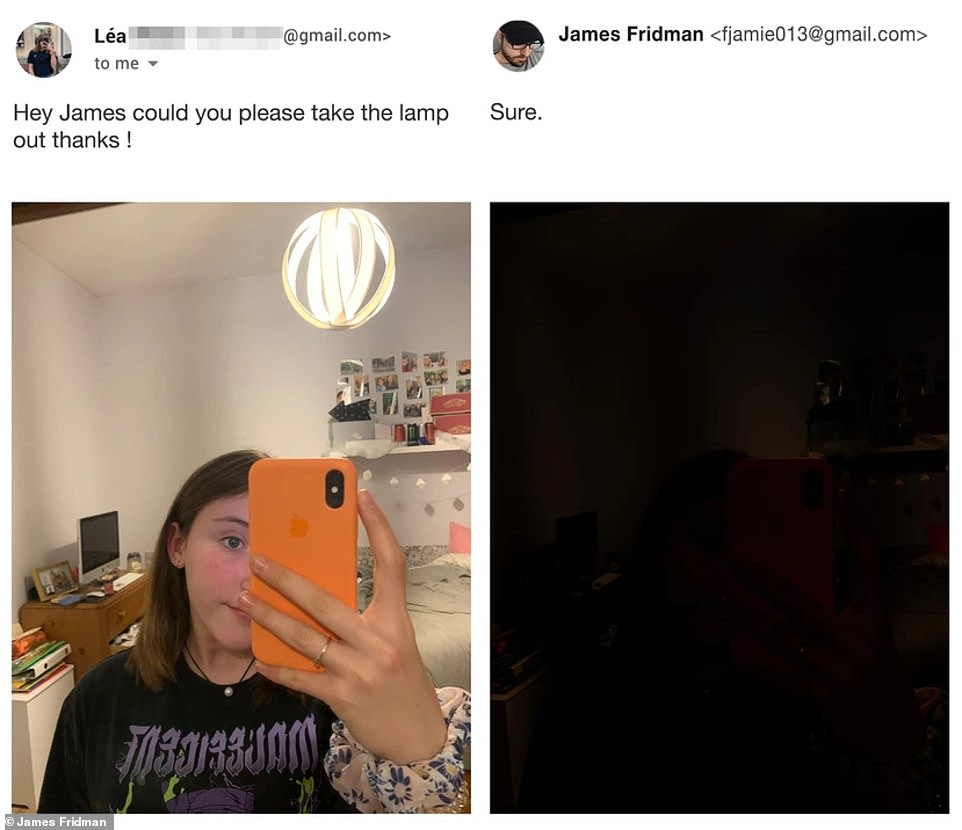 Baby when the lights go out: When one social media user asked for the lamp in her photo to be removed, James happily obliged – but he also plunged the photo into darkness, noting that, without the light, she wouldn’t be visible 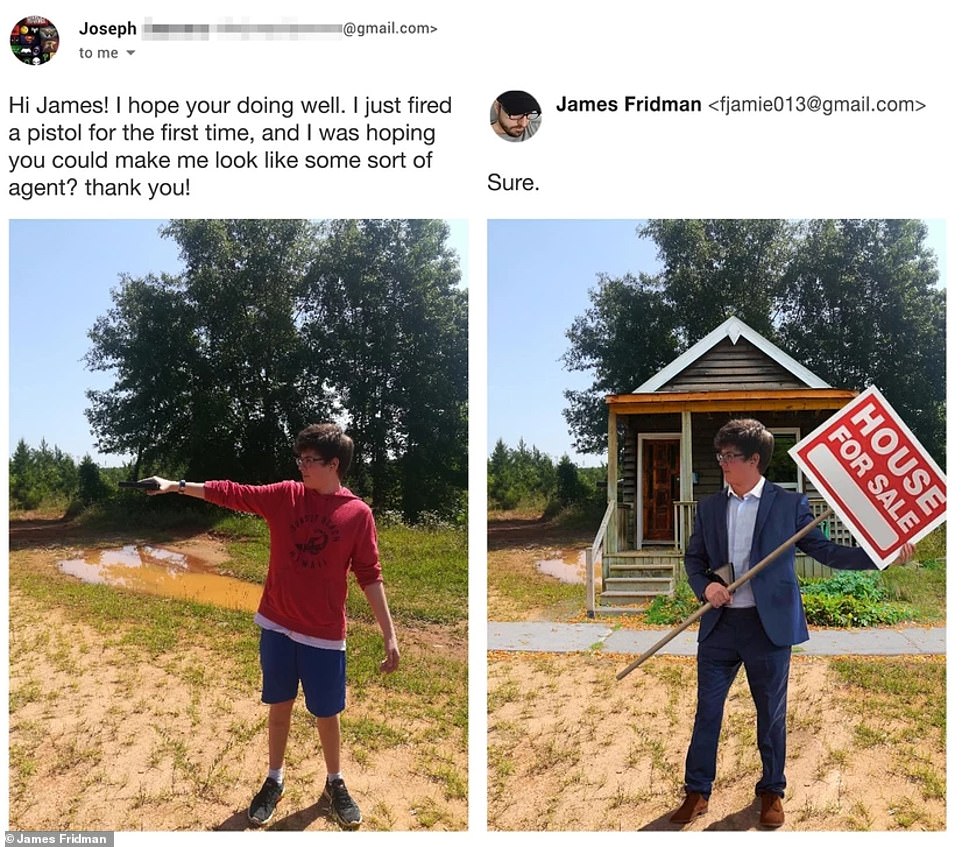 Be specific! A young man who was snapped firing a pistol for the first time asked for James to make him look ‘like some sort of agent’, which the picture expert did – but rather than a secret agent, he opted for a real estate agent 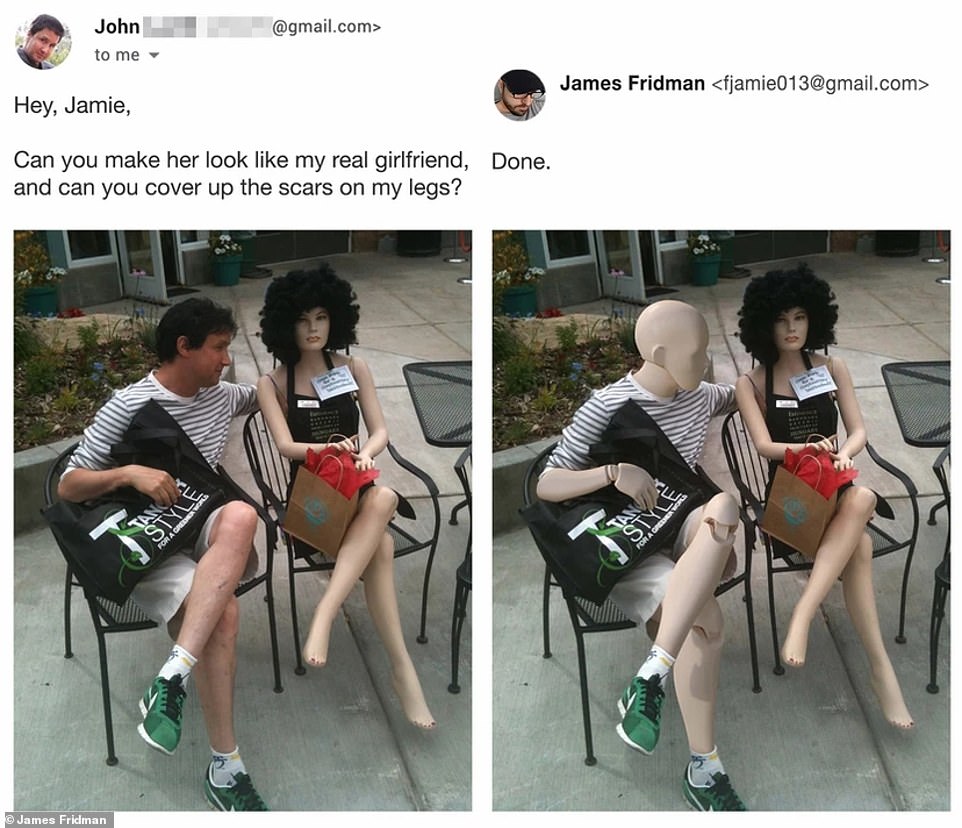 You asked for it! While many might have edited the mannequin in this picture to look like a human in order to fulfill this man’s request to ‘make her look like my girlfriend’, James instead chose to transform him into a figurine to match her 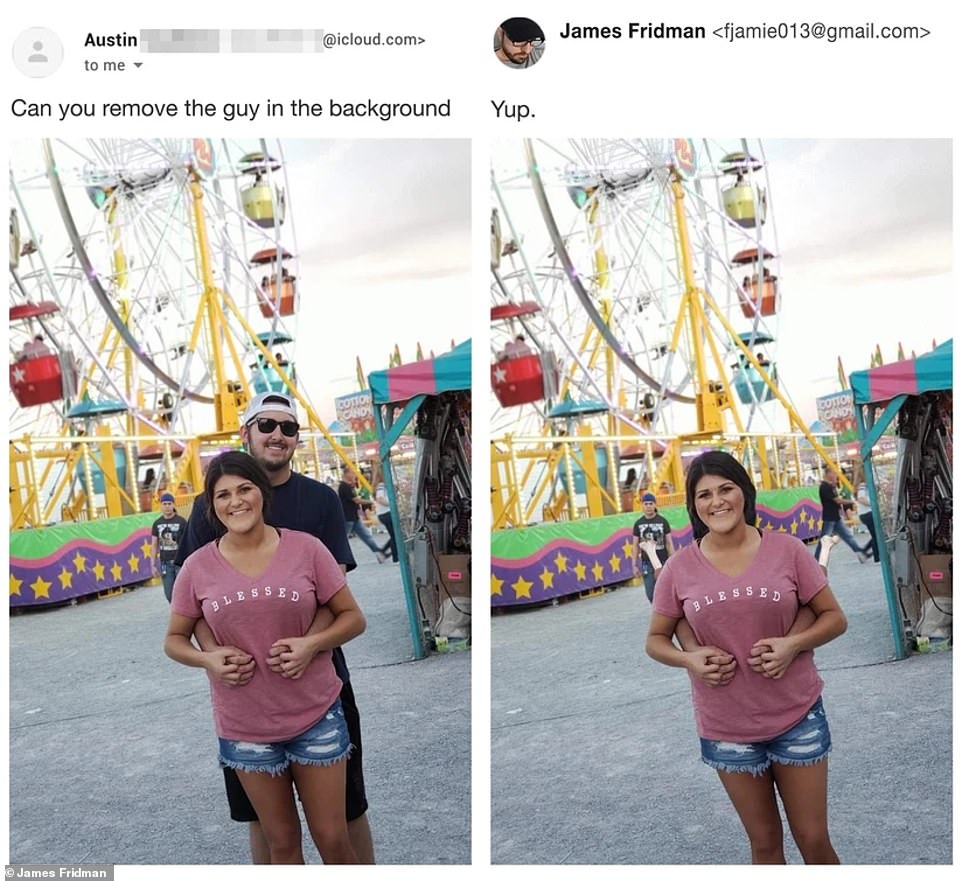 Perfect! Many of the requests are not very clear and James is more than happy to take full advantage of that, as he did with this photo in which a woman asked for a man to be removed from behind her – not thinking James would take out her partner 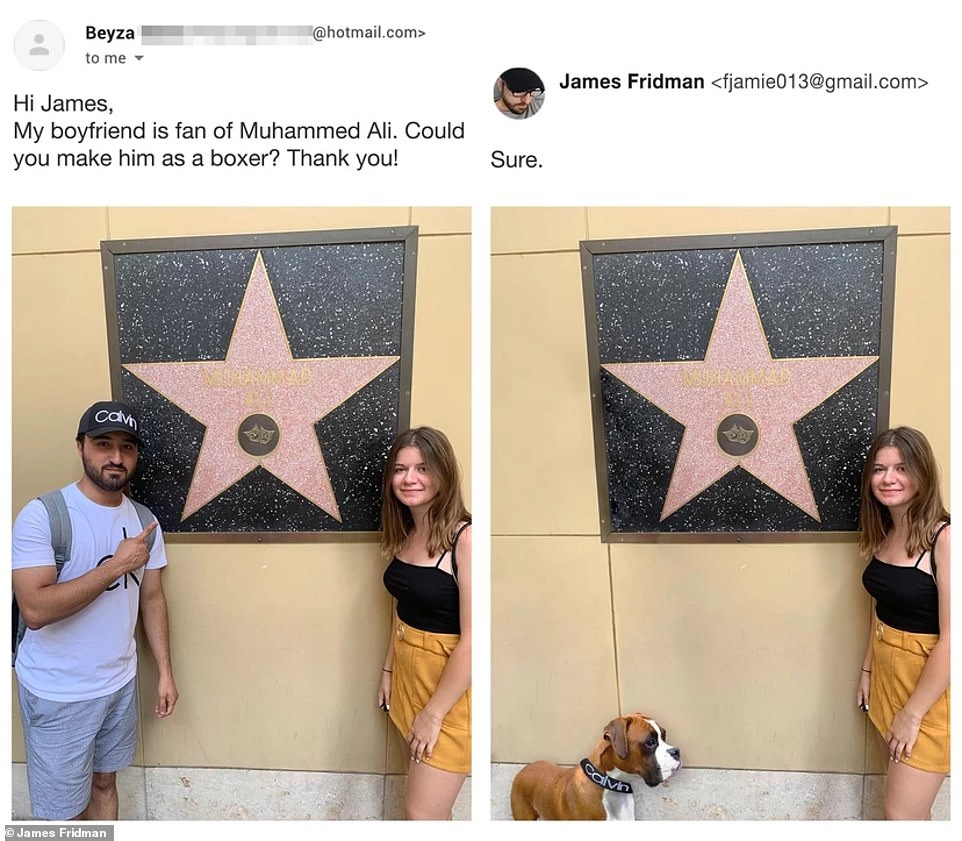 Clever! James often puts a quirky spin on different words, in this case using the word boxer to mean a breed of dog rather than a sporting star 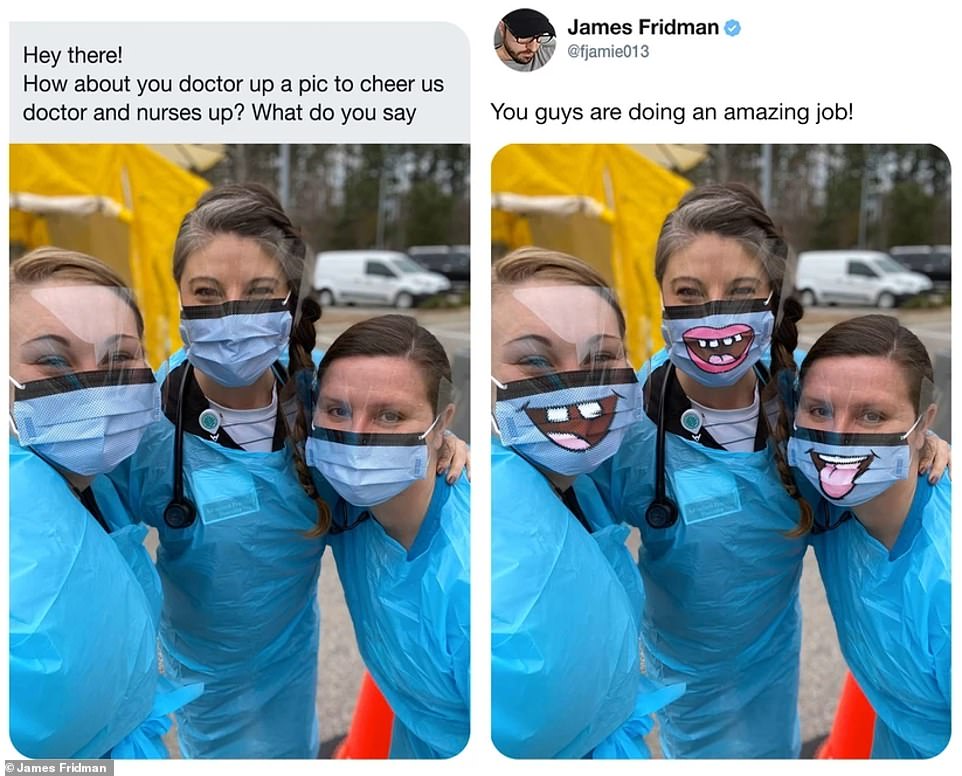 Bringing some joy: The Photoshopping whiz took the time to put a smile on these nurses’ faces – quite literally 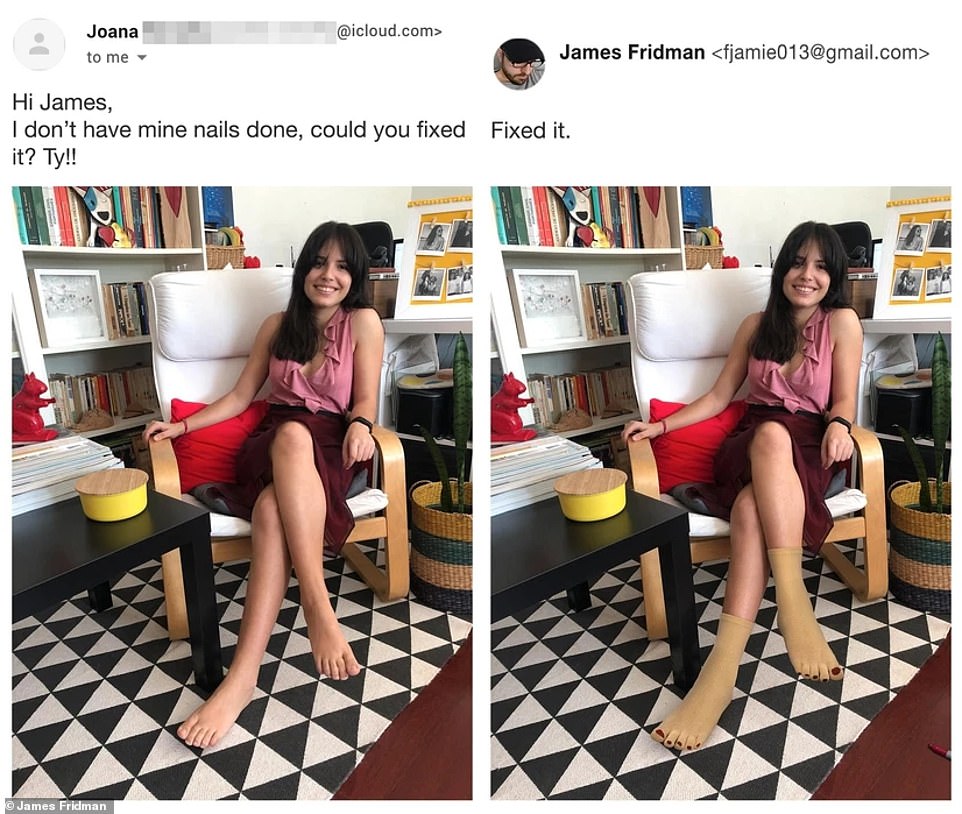 A cover up: Instead of intricately editing each of this woman’s toe nails to look perfectly pedicured, James simply ‘fixed’ them by adding some very bizarre looking socks 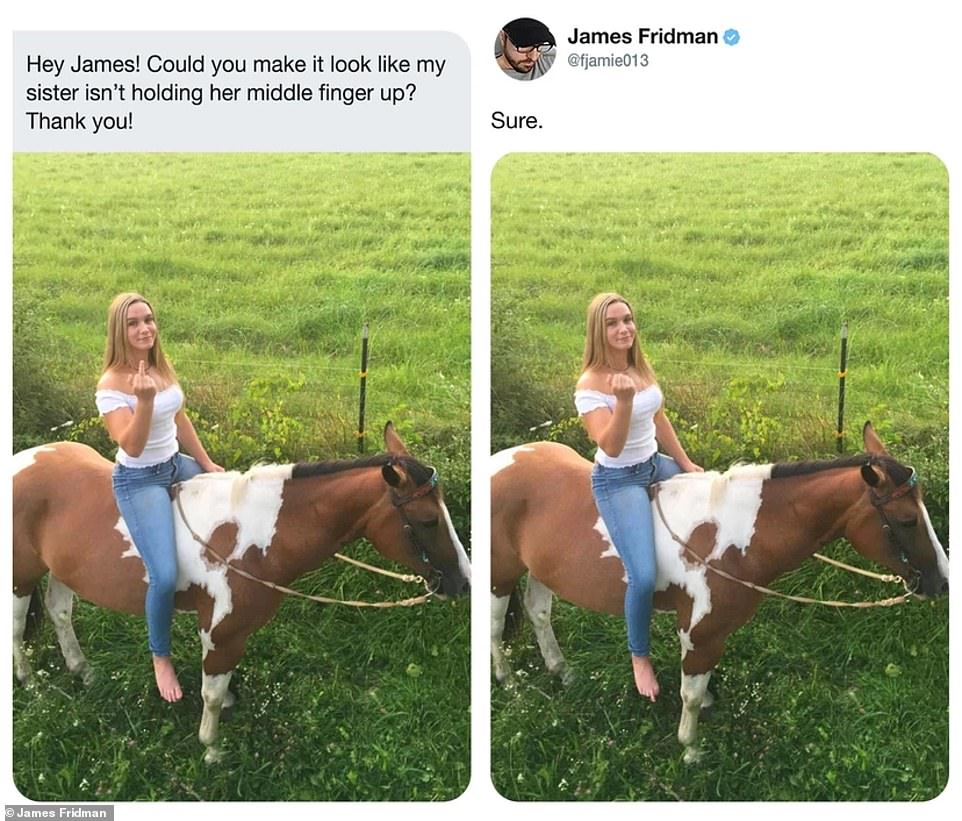 Subtle: This woman’s sibling asked for James to edit out her middle finger – which he did, while also raising her middle toe 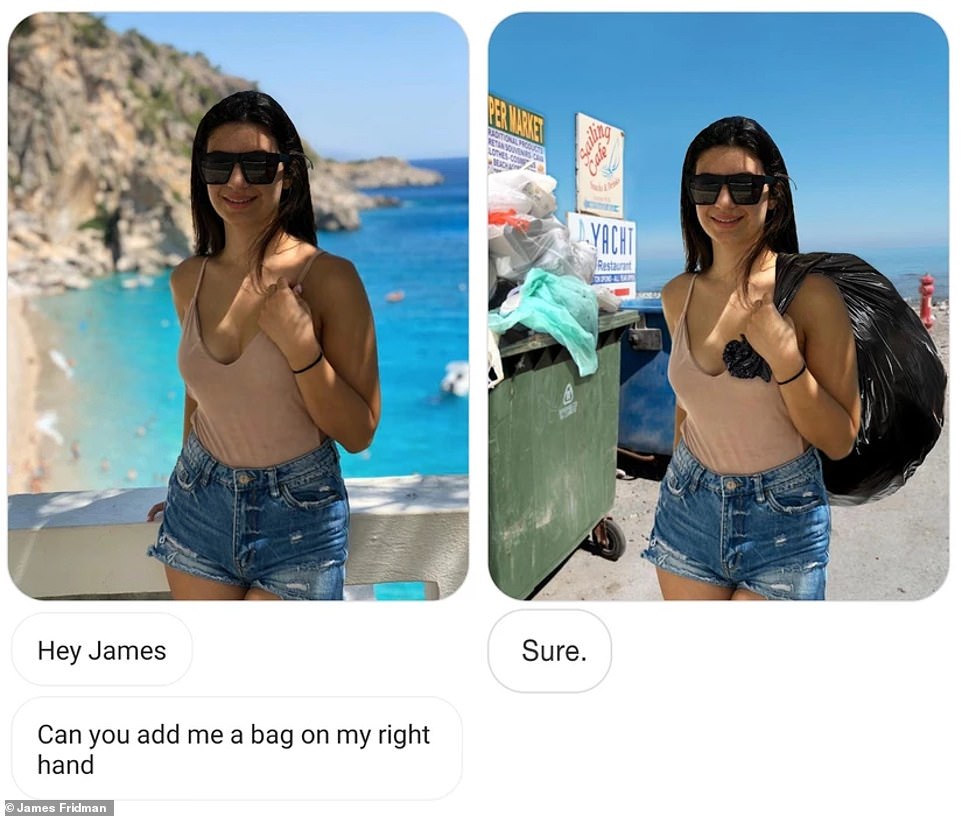 Total trash! One woman was turned into a garbage collector after asking James to edit a bag into her photo 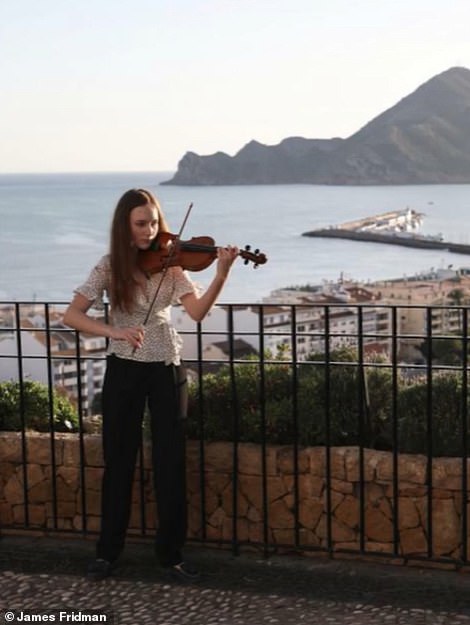 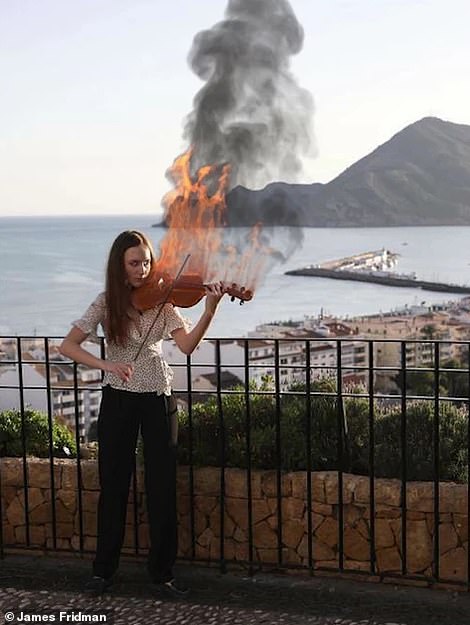 Light her fire! When a violinist asked to look more ‘passionate’ in her photo, James made sure that he brought the heat 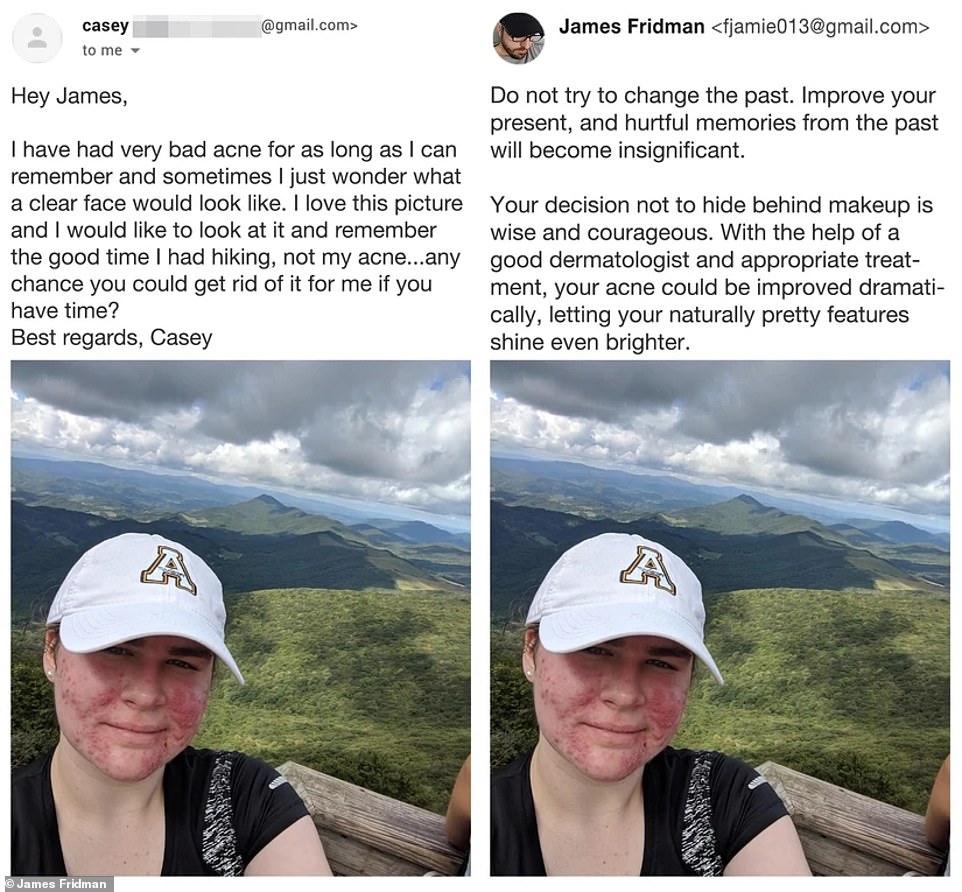 Sentimental: James put humor aside for this request, instead choosing to praise a woman who showed off her acne in a photo for being so ‘wise and courageous’, while urging her not to ‘try and change the past’