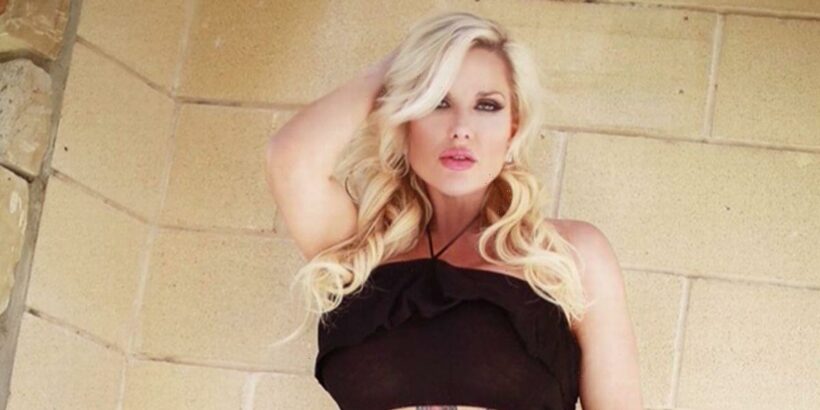 A Playboy model says it's "liberating" to flaunt her tattoos on the cover of magazines – and she loves ink so much that she now runs her own parlours.

Kandy Kouture, 38, from San Antonio, Texas, has modelled professionally since she was a child.

She appeared in a newspaper for the first time when she was only one-year-old, and it was the start of what went onto become a highly glamorous career.

Since then she's been on the cover of around 35 magazines including FHM – but she said the pinnacle of her modelling career was when she featured as the Playmate of the Month for Playboy Australia in October 2019.

Speaking exclusively to The Daily Star, Kandy said she always looked up to role models such as Marilyn Monroe, Pamela Anderson and Anna Nicole Smith.

She said knowing that she's featured on the same pages as such an illustrious group – and exclusive dynasty – has been a "dream come true".

Kandy said: "Modelling is a creative release for me. It's a way to participate in an artistic forum and create beauty.

"It's definitely not all glamour – it's hard work and long hours, but the end result is creatively fulfilling and worth it.

"In addition to modelling, I own a chain of luxury tattoo shops – Ink Couture Tattoos – with three locations in San Antonio and a fourth location opening in Austin, Texas, in just a couple months.

"In many ways the tattoo industry and the modelling industry are not dissimilar – both involve beauty, body modification and self-expression.

"I had always been fascinated with tattoos, but growing up in pageantry and modelling I knew that (at least at that point and time) tattoos would limit my work and marketability.

"I reached a point and age, however, where I had achieved many of my modelling aspirations, so I was ready to take the tattoo plunge, so to speak."

Kandy's first tattoo was a large colourful peacock that extends from under her left armpit, along her torso and reaches down to her upper thigh.

Due to the nature and positioning of the tattoo, the model found herself to be "very exposed" in an open room full of other clients – and "all too interested" other tattoo artists at the time.

"While the tattoo was amazing, the experience was eye-opening," she said.

"By the second session, I had become a master in creatively wrapping and draping my nude body, but it left me wondering why there wasn't something different.

"I started to do research and found that more women are tattooed than men every year since 2012, but the industry hadn't changed.

"That's where the idea for Ink Couture Tattoos was born.

"The demand was so overwhelming, we opened our second location just 14 months later.

Kandy said there are a "handful" of tattooed Playmates among the international Playboy magazines, which she said tend to be a little more progressive – but non-tattooed models still seem to be the norm.

To her knowledge, there has still not been a heavily tattooed model to appear in the US Playboy and she'd love to be the first.

She said: "For the first number of years after being tattooed, I was billed exclusively as a 'tattoo model', which definitely led credibility to the tattoo shops.

"I mean, who knows how important the right tattoo is more than someone who has their tattoos on display worldwide in the pages of magazines?

"Slowly, as the world has become more accepting of tattoos, I've found that I'm referred to more and more as just a 'model.'

"I think appearing in Playboy is a testament of that – that inclusivity is wonderful and liberating.

"I am a very open proponent of plastic surgery and body modification in the pursuit of beauty, and I think tattoos are just a natural extension of that.

"With new feminine styles of tattooing like colour realism and watercolour, tattoos can be beautiful feminine artwork, enhance the natural curves of the female figure, commemorate a moment in time, person, place or story.

"My tattoos are not only a form of self-expression, but beautiful accessories as well."

She said much like Barbie was portrayed as a doctor, astronaut, housewife and veterinarian – she doesn't think you have to be limited to just one thing in your lifetime.

Kandy admits she spent many years unsure of what she wanted to do with her life – she has a real estate license, she's a certified personal trainer, she has an MBA and multiple degrees in Marketing, History and Psychology.

She's achieved all this on top of her modelling career.

"I believe that the tattoo industry is the convergence of all that experience," she said.

"You can be a model, you can be beautiful and you can have tattoos – none are mutually exclusive.

"I am not actually a tattoo artist -– I could only wish I had that amazing level of talent.

"Together with my husband, I only own and manage the studios.

"I do have 29 phenomenal tattoo artists currently from around the world.

"On any given day, you can find me actively at one (or multiple) shops working in marketing, operations and just appreciating the amazing tattoo artwork that comes out of Ink Couture Tattoos.

"I'm still very much an active professional model as well.

"In the last month, I've travelled from Texas to Florida, LA, and New Orleans and I'll be back in LA in a few weeks."