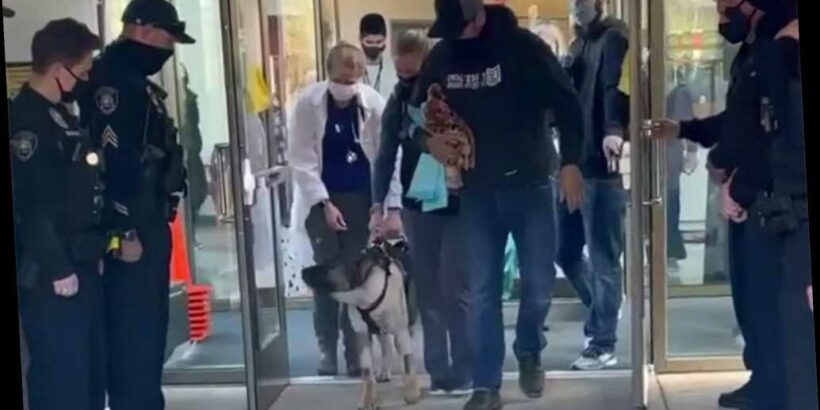 TikTok user glitterbombs boyfriend’s apartment after he cheats on her

Every dog has his day.

Woofing up a whopping 5.2 million likes on TikTok, K-9 Officer Arlo was afforded a howling hero’s welcome as he walked out of the hospital Monday after a near-fatal shooting.

A paw for the law, the 3-year-old Thurston County Sheriff’s dog was shot multiple times during a police chase in Washington state last week.

The German shepherd was treated for a through-and-through bullet wound in his leg by a local vet, but was transported to Oregon State University’s Carlson College of Veterinary Medicine for another bullet near his spine.

Ahead of his eight-hour surgery Friday morning, doctors gave Arlo a 60% chance of surviving the procedures.

“The bullet missed an artery that would’ve killed him by a millimeter,” said Warnock. “It could’ve destroyed his carotid artery.”

Warnock and a team of animal-care specialists found that the bullet had tracked all the way through Arlo’s shoulder, taking a chip off of the shoulder joint before landing in his neck.

Saving his life, the veterinary experts fused his C6 and C7 vertebrae with six screws and surgical cement.

“The shoulder that had all the bullet damage is the weakest,” Warnock said, noting Arlo will likely develop arthritis as a result of his injuries. “He’s still weak, but he’s improving by leaps and bounds.”

Arlo, the newest member of the Thurston County Sheriff Department’s K-9 unit, ambled out of the medical facility with the help of the health-care professionals.

Upon being discharged from the hospital, the hero hound was warmly saluted with a chorus of “Good boy!” cheers from his handler, Deputy Tyler Turpin, and his fellow officers.

After a police escort back to Washington, Arlo was greeted by his entire neighborhood in Olympia and a dazzling lawn sign that read “Welcome Home Arlo.”

Turpin, who administers Arlo’s TikTok account, which has more than 1.2 million followers, wrote in a video celebrating the doggy’s recovery: “K-9 Arlo and I can’t express the amount of gratitude we have for everyone who helped us with this journey. Because of my TikTok, first responder and community family, he fought and won.”

Arlo will not be returning to active duty.

When Thurston County K-9 dogs retire, their handlers are given the first opportunity to purchase them as pets.

Since the shooting, Arlo admirers have raised over $70,000 via GoFundMe toward the police pooch’s medical bills and long-term care.