‘Disturbing so many are on HIS side!’ Praise pours in for female World Cup reporter who told a fan off for trying to kiss her – but others defend his actions as ‘just being friendly’

A video clip of a female Brazilian World Cup reporter telling off a football fan for trying to kiss her has prompted a storm of divided reaction on social media.

While the majority of responses praise Julia Guimarães, a reporter with TV Globo and SporTV in Brazil, for offering up a lecture in boundaries to the fan, others say he was merely ‘being friendly’.

Guimarães had been filming to camera ahead of the Japan v Senegal game in Yekaterinburg on Sunday when the man approached her and tried to kiss her cheek.

After quickly dodging the intimate gesture, she promptly scolded him for trying to do it in the first place, finishing the exchange with the word ‘respect!’.

However, the footage of the moment, which has made headlines all over the world has now sparked a deluge of comments, with many divided.

@adelleculley rubbished suggestions that the kiss was akin to sexual assault, writing: ‘Lots of people have given me a kiss on the cheek. Nans, grandads, work colleagues, boys in the playground (kids chase!). Is that sexual assault? Might I add none of them asked for my permission first. Yet it was fine with me!’

@clairelpdon disagreed vehemently, saying: ‘You can’t just suddenly appear, kiss someone out of the blue and expect them to be fine with that.

‘At the end of the day she’s at work trying to do her job, it’s not appropriate in any way for a stranger to do that, but I’m sure he meant no harm, he was very apologetic.’

@terry_settle chimed in: ‘I don’t think it was right what he tried to do, but wasn’t malicious. She’s over-reacted.’ 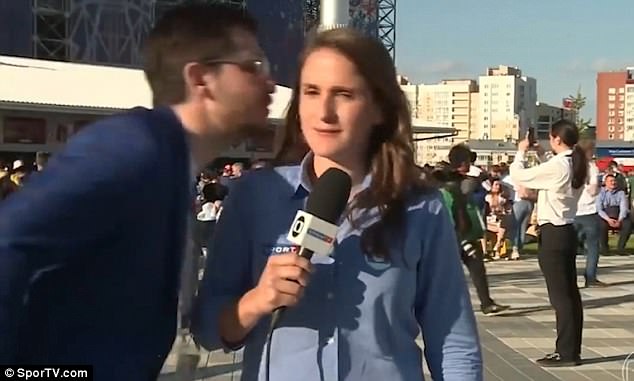 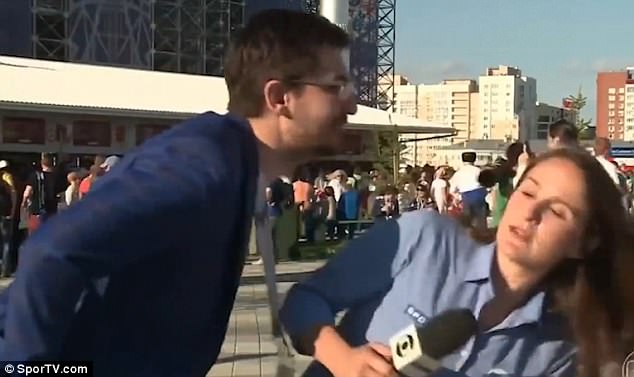 The reporter, with TV Globo from Brazil, narrowly managed to dodge the man’s advances 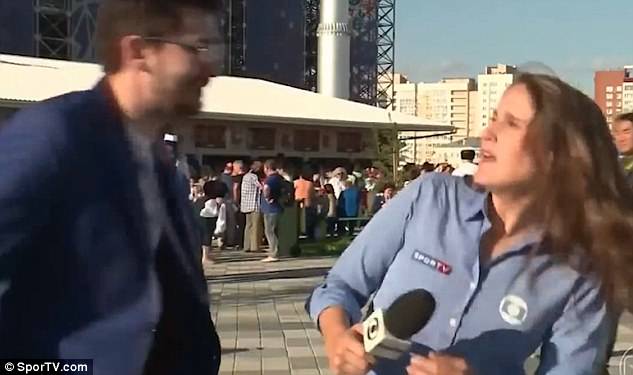 As he hastily retreated, the reporter scolded him and demanded that he respect women

@LuxfordC was shocked at the difference in opinion on the social media site, saying: ‘Disturbing that so many replies seem to be on his side.’

For others, there was no question that the fan got away lightly with just a telling off.

@KenGoodwinITV wrote: ‘He’s lucky she didn’t whack him one around the lug-hole with her microphone.’

The exchange saw Guimarães tell the fan who tried to kiss her: ‘Don’t do this. Never do this again, OK?’

‘I’m sorry, sorry, OK, OK,’ he is heard replying from out of the camera’s shot.

Ms Guimarães continued: ‘I don’t allow you to do that, never. OK? This is not polite. This is not right. 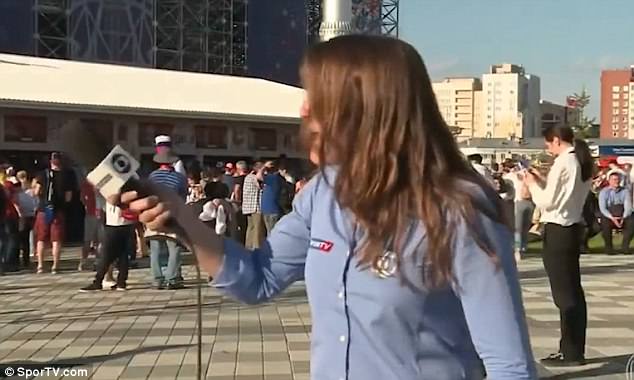 The reporter later revealed that it was the second time a fan had attempted to kiss her in Russia.

‘I’m experiencing it a lot in Russia,’ she told Globo Esporte, adding the harassment had ranged from aggressive looks to songs in Russian aimed at her.

‘Which obviously I do not understand, but I feel,’ she said.

‘And it’s the second time something physical has happened, with a guy trying to kiss me.’

She added: ‘It’s awful. I feel helpless, vulnerable. This time I gave an answer, but it’s sad, people do not understand.

‘I wanted to understand why he thinks he has a right to do that.’