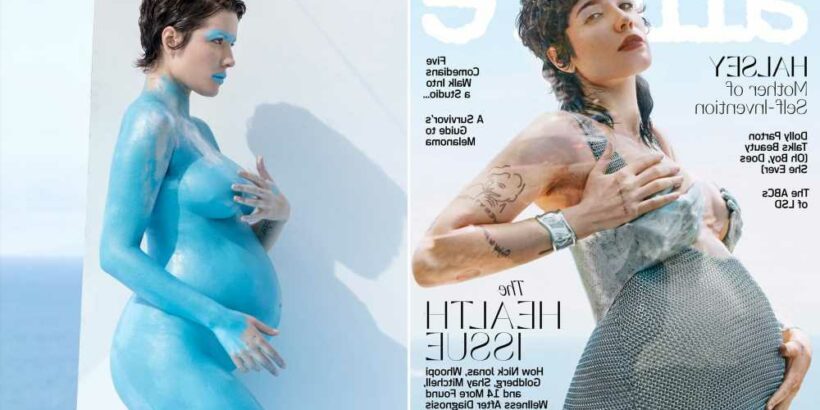 Did Halsey have her baby? Why fans think she gave birth

Pregnant Halsey wears ring while out with boyfriend Alev Aydin

Halsey says her pregnancy was ‘100% planned’

Halsey is one hot mama.

The 26-year-old “Without Me” singer, who’s expecting her first child with boyfriend Alev Aydin any day now, posed for one last, glorious magazine cover while still pregnant.

Inside the magazine, the pop star poses nude with blue paint covering her body, and also models a pastel Gucci gown and oversized metallic Noir Kei Ninomiya coat, along with a badass mullet and bold beauty looks from her own About-Face brand.

“Alev and I have been really good friends for four years,” Halsey told the glossy of her baby’s father, a screenwriter. “And when the stars aligned, our relationship became romantic and it was pretty evident that he and I were both like, ‘Oh, my gosh! You’re the person I’m supposed to start a family with.’”

The singer, who has been open about her struggles with endometriosis and her devastating 2015 pregnancy loss, has kept her current pregnancy fairly private.

Some fans are convinced she may have already given birth, as the cover art for her upcoming album “If I Can’t Have Love, I Want Power” features the semi-nude star sans bump, holding a baby on a throne.

“When this pregnancy started, I was like, ‘You’re going to do yoga and eat flaxseed. You’re going to use essential oils and hypnobirth and meditate and f—king journal every single day,’” Halsey recounted to Allure.

“I have done none of those things. Zero. None. I eat cookies and had a bagel every single day for the first five months of my pregnancy.”

Allure’s August 2021 issue will be available on newsstands in NY and LA on July 13, and nationwide August 20.