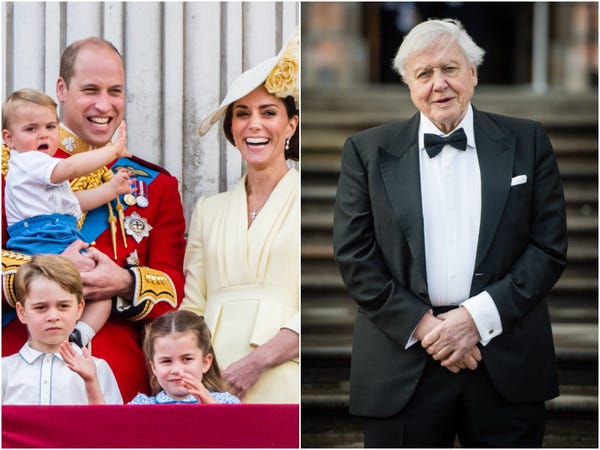 Prince William and Kate Middleton shared a video of their children speaking to Attenborough via the family's official social media accounts on Saturday. The video is believed to be the first time that all three royal children have spoken together on camera, according to Sky News.

The family captioned the video: "Sir David Attenborough, we've got some questions for you…"

The video includes Prince George, 7; Princess Charlotte, 5; and Prince Louis, 2; each asking Attenborough one question about the environment.

"What animal do you think will go extinct next?" Prince George asked Attenborough.

"Well, let's hope there won't be any! There are lots of things we can do when animals are in danger of extinction. We can protect them," Attenborough said in response to Prince George.

Princess Charlotte and Attenborough then discussed their shared love of spiders.

Prince Louis was the last to question the environmentalist, asking what his favorite animal is, to which Attenborough responded that he likes monkeys best.

The video comes after the Duke and Duchess of Cambridge met with Attenborough in the gardens outside Kensington Palace during the week of September 21.

In one photo from the event, Prince George is holding a giant shark tooth that was gifted to him by Attenborough.

"Sir David found the tooth on a family holiday to Malta in the late 1960s, embedded in the island's soft yellow limestone which was laid down during the Miocene period some 23 million years ago," the royal family wrote on Instagram.

However, it's possible that Prince George might have to return the prehistoric shark tooth that Attenborough gave him.

On September 28, Malta's Culture Minister José Herrera told the Times of Malta that he plans to ask for the tooth to be returned so that it can be included in the nation's collections.

Citing Malta's Cultural Heritage Act 2002, the Times of Malta reported that fossils are considered "cultural heritage." Items that fall under the "cultural heritage" category cannot be removed or excavated from Malta, according to the policies.

"There are some artifacts that are important to Maltese natural heritage and which ended up abroad and deserve to be retrieved," Herrera told the Times of Malta.

Additionally, the duke and duchess shared on Instagram that they are working with Attenborough on the Earthshot Prize, a project the couple started in 2019 to award cash prizes to five people who can come up with solutions to environmental problems.

Representatives for the Duke and Duchess of Cambridge and Malta's Ministry for the National Heritage, The Arts, and Local Government, respectively, did not immediately respond to Insider's requests for comment.