Prince Harry has made an emotional return to Lesotho in southern Africa to open a community hall on behalf of his charity Sentebale.

The Duke of Sussex, 33, was in Pitseng to open the new building at the Phelisanong Children’s Centre on Saturday.

His new wife the Duchess of Sussex has not accompanied him for his short trip to the country.

Kensington Palace confirmed that Harry is on a ‘private visit’ to Lesotho, which is connected with his work with Sentebale. 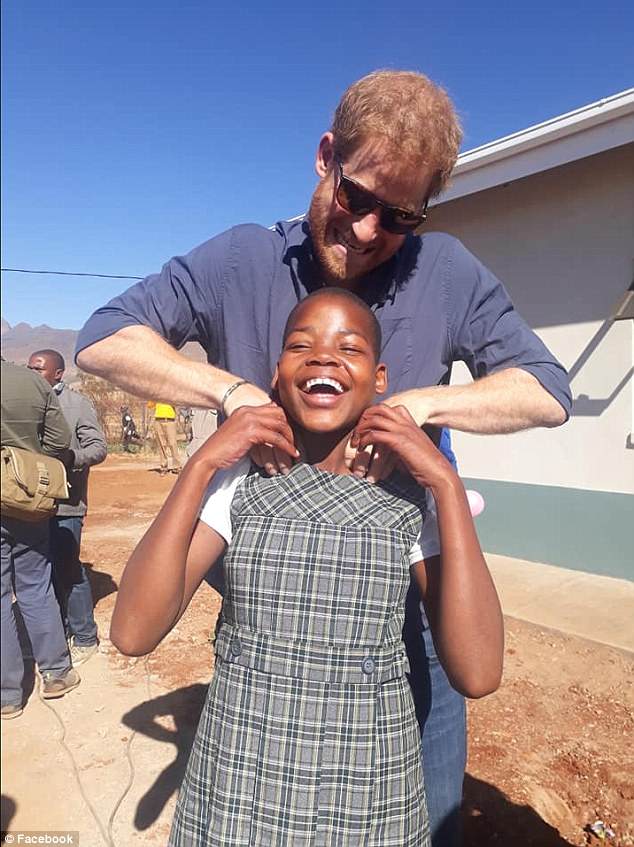 Photographs posted on social media by the Phelisanong Children’s Centre show Harry looking relaxed as he met with local children at the centre.

During the visit, he unveiled a plaque at the new community hall, donated by his charity Sentebale to mark the official opening.

The Duke was also joined by friend and Sentebale ambassador Adam Bidwell on the visit.

Harry has a close connection to Lesotho, visiting the country on a number of occasions over the years since his first trip there in 2004. 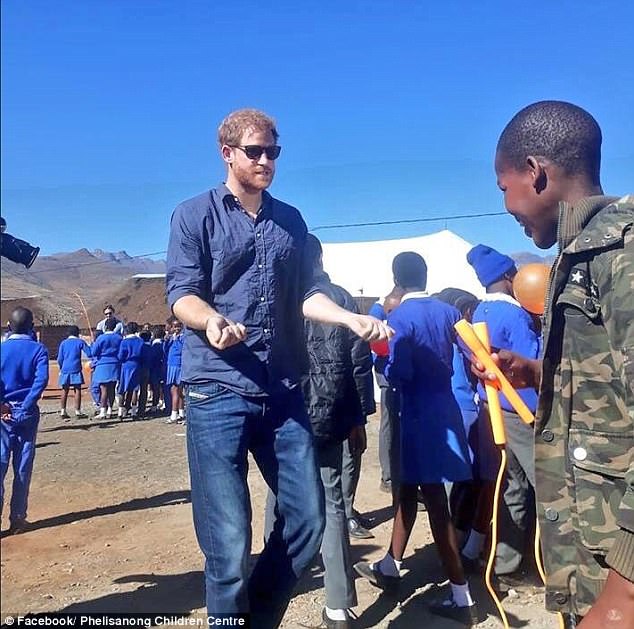 The Duke of Sussex, 33, looked relaxed as he met with local children at the Phelisanong Children’s Centre 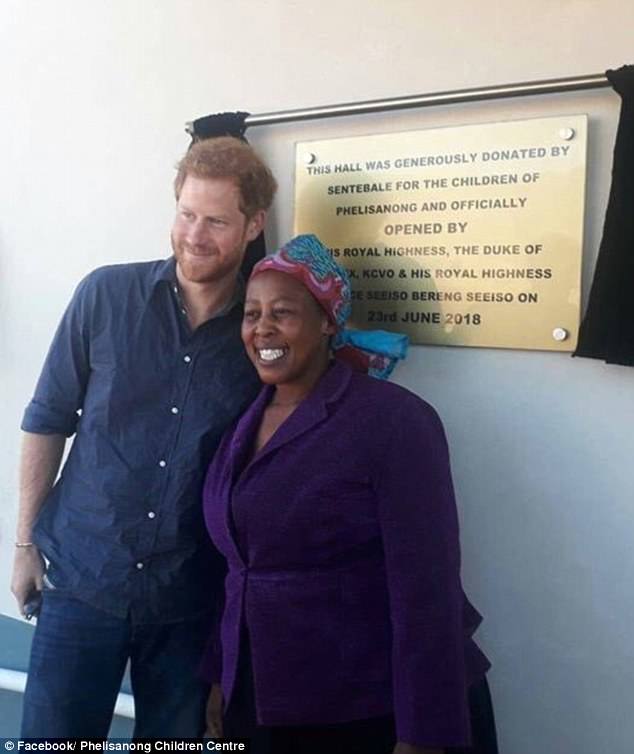 He co-founded the charity Sentebale – meaning ‘forget me not’ – with Prince Seeiso in 2006 to improve prospects for the thousands of children and young people affected by HIV/Aids in the landlocked African country.

It has since delivered adolescent-friendly HIV testing and counselling services to more than 21,000 people, and plans to expand into four or five sub-Saharan African countries by 2020.

Harry famously developed a close bond with four-year-old Mutsu Potsane while volunteering in Lesotho back in 2004.

He was reunited with Mutsu, who is now 18 and a representative of Sentebale, in 2016, before inviting him to the royal wedding earlier this year. 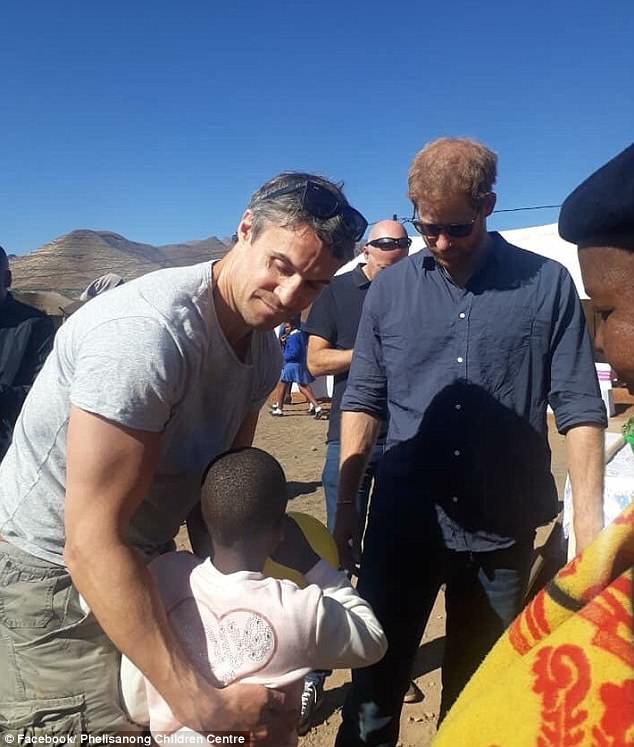 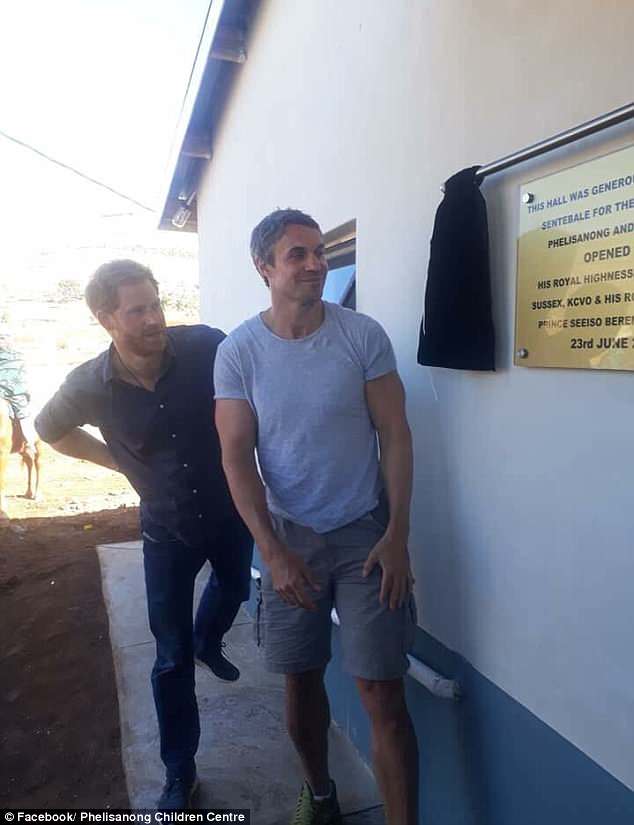 Kensington Palace confirmed Harry is on a ‘private visit’ to Lesotho, connected to his work with the Sentebale charity

Prince Seeiso, who was also invited to the big day at Windsor Castle, praised Harry for his work with Sentebale during an interview following the ceremony.

He said: ‘The young Harry who first arrived in Lesotho in 2004 is now a grown man getting married.

‘I’ve come here with all the wishes of Lesotho, I’m not here on my own behalf I’m here representing the entire nation who are so happy.’

Prince Seeiso also described how said that the children who benefit from their charity ‘all love him’. 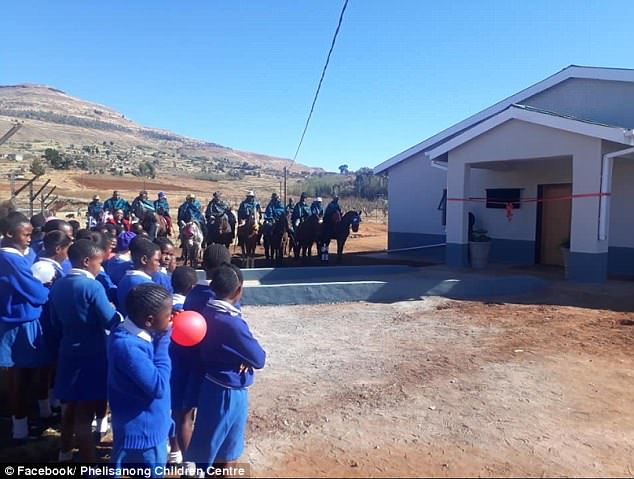