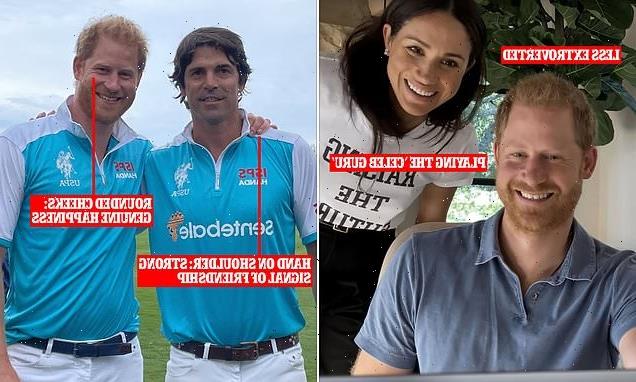 Finally, he’s back to happy Harry! Prince looks ‘relaxed’ and ‘relishes’ the camaraderie of polo, body language expert reveals – unlike the ‘rigid awkwardness’ and ‘guru persona’ of recent appearances

Prince Harry’s ‘relaxed team dynamic’ at the polo starkly contrasts to the ‘celebrity guru’ version of himself he recently portrayed during a video with wife Meghan Markle, a body language expert claimed.

The Duke of Sussex, 36, hosted a charity polo tournament in Colorado for his Sentebale charity yesterday, to which he pledged more than £1million – marking his first public appearance since the birth of his daughter, Lilibet.

And according to Judi James, this polo version of Harry is a world away from some of his most recent appearances – including when he featured in a trailer for his new Apple TV series with Oprah Winfrey, and during his late mother Princess Diana’s statue unveiling, where he seemed notably more ‘rigid.’

Speaking of Prince Harry’s appearance at the polo, Judi told FEMAIL: ‘If we compare Figueras’ polite and more impersonal smile for the camera with Harry’s wide grin of happiness, the suggestion is that Harry is really relishing the opportunity to return to the more traditional team roles he once shared with his equally polo-loving brother and even his father.’ 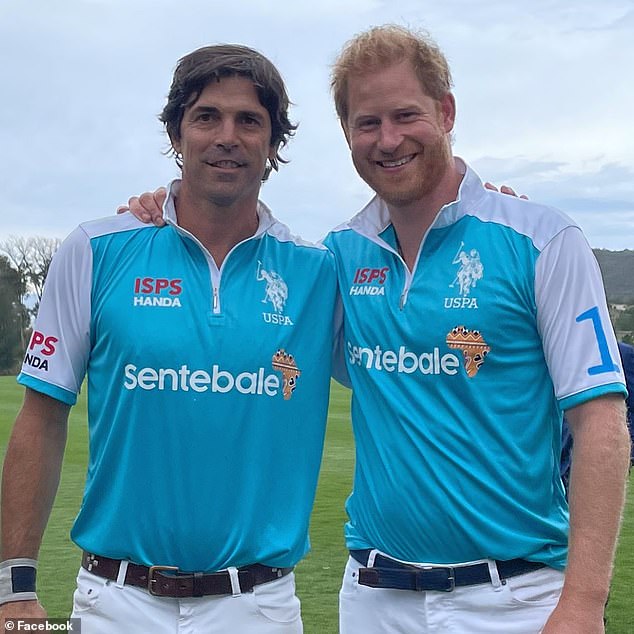 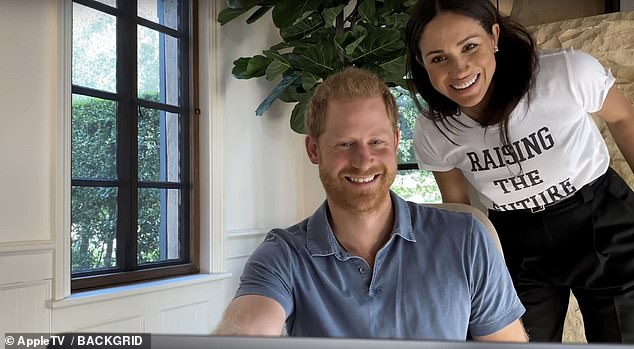 The Duchess of Sussex, 40, appeared behind her husband dressed in a £27 top by British designer Mere Soeur which bears the slogan ‘raising the future’ during a trailer for his Apple TV series

‘Harry’s eye contact is directed straight at the camera here in a sharing ritual and his narrowed, crinkled eyes and his rounded “apple” shaped cheeks signal genuine happiness rather than just a more polite social smile.’

The Duke of Sussex’s appearance at the Sentebale ISPS Handa Polo Cup in Aspen yesterday comes one day after it was revealed he planned to restart more in-person charity work through the Archewell Foundation.

Harry scored two goals as the Sentebale team ran out 3-0 winners in a round-robin format with two other sides – and the charity said it had raised nearly £2.6million ($3.5million) which is a new record for the tournament.

However, Judi notes how the royal’s body language told a completely different story  during an earlier appearance in the trailer for his Apple TV series, The Me You Can’t See, back in May.

In the short clip, his wife Meghan can be seen appearing behind him in their $14m Santa Barbara mansion. 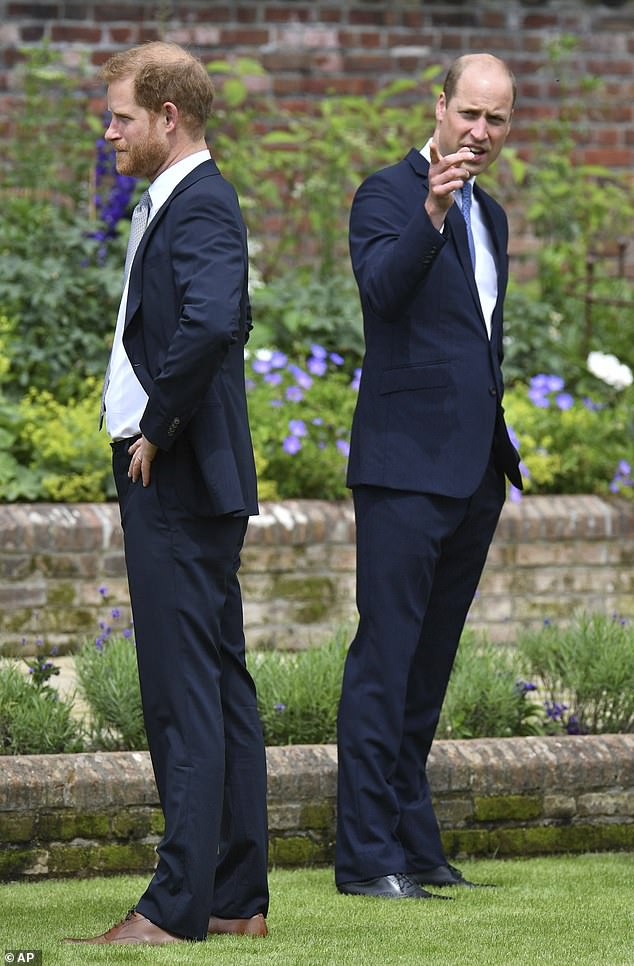 Prince William, right, and Prince Harry after the unveiling of a statue they commissioned of their mother Princess Diana, on what would have been her 60th birthday, in the Sunken Garden at Kensington Palace in London, on July 1, 2021

‘His video link filming with Meghan always look happier and their rapport signals as a couple are strong,’ explained Judi. ‘But it is a more sociable and less extrovert version of Harry who looks immersed in a role of celebrity guru rather than a guy sharing the fun with his pals.’

The expert also goes on to discuss the Duke of Sussex’s ‘rigid awkwardness’ at the unveiling of a statue they commissioned of their late mother Princess Diana, on what would have been her 60th birthday, in the Sunken Garden at Kensington Palace in London, on July 1.

‘The rigid awkwardness of the statue unveiling comes when he so clearly felt under scrutiny and under pressure to perform an act of unity with the brother he had once loved to share a polo game with,’ she explained. ‘His posture there looked rigid and his self contact rituals suggested inner anxiety.’

But Judi notes how Prince Harry’s body language at the polo match threw up all the ‘signature signals’ from his time playing in the UK. 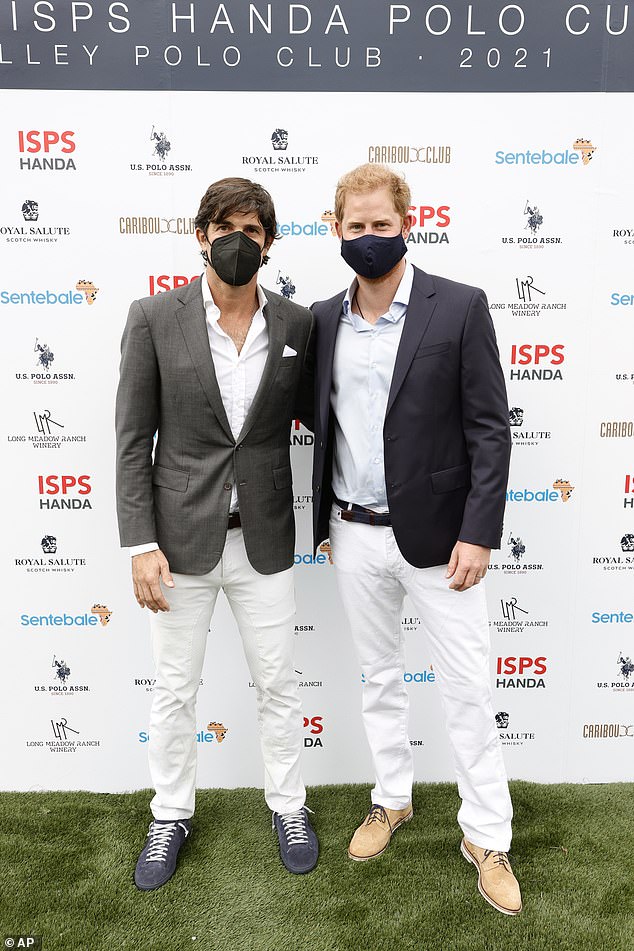 ‘This is very much a solo appearance in terms of his family but also a team effort and his enthusiasm and joy at returning to this life-long passion is as visible as his keenness to immerse himself in the rituals of friendship and camaraderie that entails,’ she explained. ‘Harry is even seen exchanging hugs of victory while still in the saddle.’

She continued: ‘For a man whose life has been about team-bonding and group dynamics, either in the military or when playing sport like polo, lockdown in a new country might have left Harry missing this important aspect of his life.

‘This return to a very relaxed and happily grinning guy sharing the win with his team-mates while showing stronger bonding signals that they are seems to prove that.’

Specifically referencing Prince Harry’s pose with friend Nach Figueras, she goes on to say how he can be seen performing a ‘clutching ritual’ that signals a desire to show upgraded friendship.

‘Figueras has an arm around Harry’s back but Harry’s hand on his shoulder forms a much stronger and more active signal of friendship and team dynamic as his fingers clutch with the tips pressing into the shoulder in a powerful tie-sign of enthusiastic sharing and bonding,’ she added.