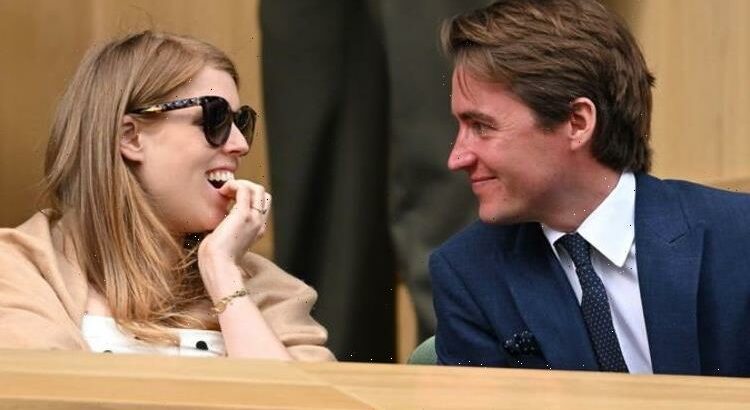 Princess Beatrice, 32, and husband Edoardo Mapelli Mozzi, 37, celebrated their one year wedding anniversary on July 17. A lot has happened to the couple since they tied the knot and they are currently expecting their first child together.

Their royal baby is due in autumn, Buckingham Palace confirmed in a statement in May.

Bea and Edo are not working royals but delighted fans last month when they stepped out together to attend Wimbledon tennis tournament alongside Sophie, Countess of Wessex, 56.

Bea was glowing as she stepped out in a polka dot maternity dress that showed her baby bump.

She and Edo were all smiles as they watched the tennis from the royal box.

Body language expert and author Judi James analysed pictures from the couple’s latest outing and compared them to photos from their wedding day.

There has been a change in the way they interact since Beatrice became pregnant, Judi claimed.

She told Express.co.uk: “There are some subtle differences in Edo and Beatrice’s body language since the wedding and some might have occurred because of Beatrice’s pregnancy and the baby bump we can see at Wimbledon.

“Their rather romantic body language is still going strong here but there is an emphasis on intense face-watching and other signals of undivided attention rather than the hand-holding touch rituals that we saw on their wedding day.”

Judi said: “Edo’s body language still defines the word ‘charm’ as he signals polite attention to his wife on both their wedding day and here at Wimbledon.

“His eyes are fixed more on Beatrice’s face if anything now and the smile prompted by the sight of her face looks both loving and flattering.

“Edo was in a slightly more sociable mood on his wedding day, smiling out at the camera and, presumably their guests, but at Wimbledon his eyes seem to be for his wife alone.”

Judi said: “Edo appears to be more solicitous and protective of his pregnant wife here, turning to face her straight-on but clasping his hands in front of his torso rather than touching her.

“This looks polite and thoughtful as though he is giving her both his full attention and her own space at the same time.”

“Their wedding day was more about the romance, with Beatrice looking very much the wide-eyed bride, even peering out of the church with a facial expression and lowered head that suggested shyness.

“Here we can see her looking similarly coy with Edo, sitting together and Wimbledon and in close conversation.”

Judi added: “He smiles straight at her and her response is a fingers in the mouth gesture that looks both flirty and rather sweetly coy for a pregnant wife, suggesting he still gives her butterflies when he flirts with her.”

Judi said: “Despite Beatrice’s rather shy body language on her wedding day she was still seen holding hands with Edo with her hand on top in the clasp, suggesting protection and control, probably to help Edo cope with the attention that royal life was creating.

“At Wimbledon though it is very much Edo who looks in the more protective role with Beatrice, leaning into her and looking slightly adult and authoritative as they stand applauding the players.”