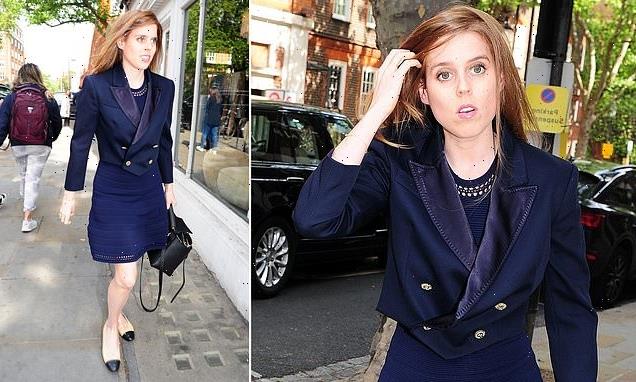 Beautiful in blue! Princess Beatrice is glamorous in a navy dress and blazer as she steps out for an event in Chelsea days after daughter Sienna’s private christening

Princess Beatrice looked glamorous in a navy outfit as she arrived at a restaurant in Chelsea on Thursday.

The 33-year-old granddaughter of the Queen stepped out for The WICT Network event held at a restaurant in London, just days after she and husband Edo Mapelli Mozzi, 38, gathered a dozen friends at a ‘private family christening’ for her seven-month-old daughter Sienna.

The WICT Network aims to provide a network to support, encourage and promote women in media, entertainment and technology.

Beatirce cut a stylish figure in a navy dress carefully coordinated with a Tommy Hilfiger blazer which she has previously been spotted in. 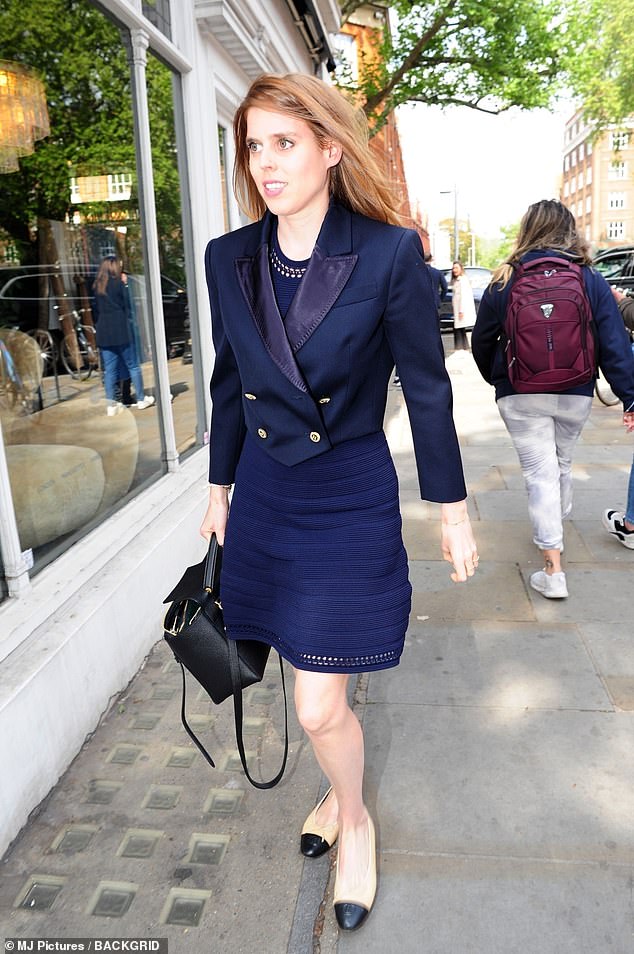 Beatrice styled her lengthy hair into a relaxed straight style before using one hand to tuck a few strands from the front behind her ear.

The mother-of-one kept her makeup subtle with a light pink lip gloss and mascara to draw attention to her eyes.

She carried a medium sized black handbag that was slightly open to show her phone placed on top of what appears to be a notebook.

Beatrice was previously a surprise speaker at The WICT Network’s Christmas event held in 2019, which she attended in her role of Vice President of Partnerships and Strategy at the AI company, Afiniti. 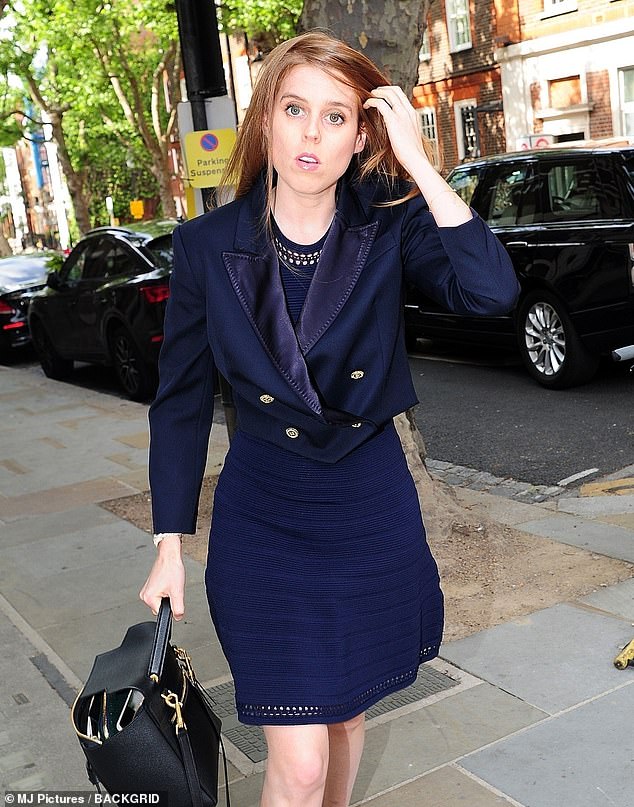 Since being established in the US in 1979, WICT has hosted events collaborating with industry experts and set up opportunities for networking.

The WICT Network claims the UK is the ‘latest chapter’ in plans to advance the position and influence of women.

The organisation invited television presenter Natalie Pinkham and Olympic medalist Kate Richardson-Walsh to speak on Thursday as they welcomed back in-person events.

Princess Beatrice previously spoke about being ‘very lucky’ to have had the opportunity to work with female roles in addition to the women in her family. 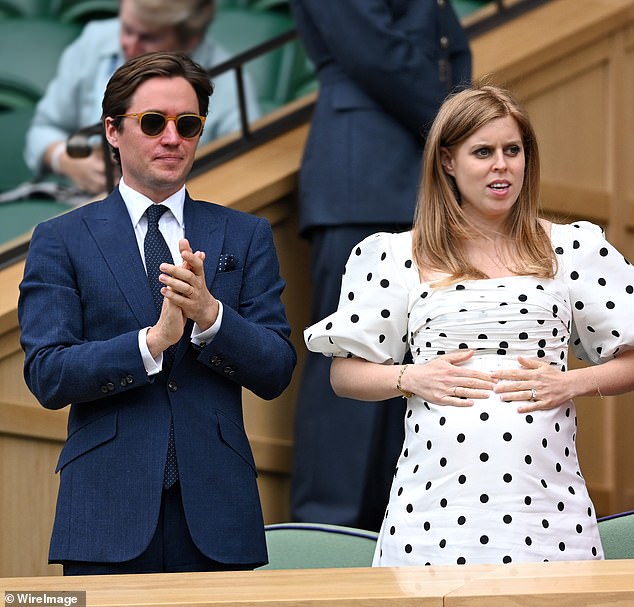 The Queen’s granddaughter (pictured with her husband), 33, the oldest daughter of Prince Andrew and the Duchess of York, gave birth to a baby girl weighing 6lbs 2oz at 11.42pm on Saturday 18 September at the Chelsea and Westminster Hospital, in London

Beatrice told The WICT Network: ‘We have to find another way, to find a new way to be [ourselves}, to be authentic – all those words which we all struggle with.

‘I have imposter syndrome. I have it every single day. But I think it’s something that we have to strive to overcome. Find those mentors, find that little voice inside of you, remember that you are part of something much bigger than yourself. Strive for authentic, strong moments and you can be as sassy and strong as you like.’

Beatrice’s attendance at their latest event comes just days after she and husband Edo Mapelli Mozzi had an hour-long christening service at St James’s Palace’s Chapel Royal for Sienna.

The couple married in 2020 and welcomed their baby daughter – their first child together – last September. 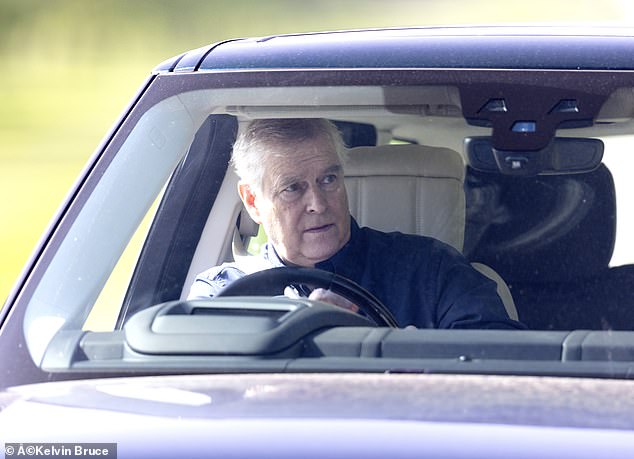 Prince Andrew (pictured), who attended the Christening service in his £220,000 Bentley, was spotted heading out for early morning horse riding in Windsor today 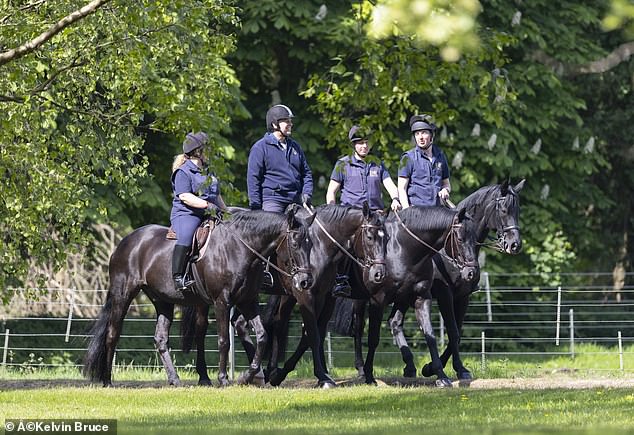 Andrew missed the birth of Sienna in September, while the lawyers for American accuser Virginia Giuffre tried to serve him with legal papers in person 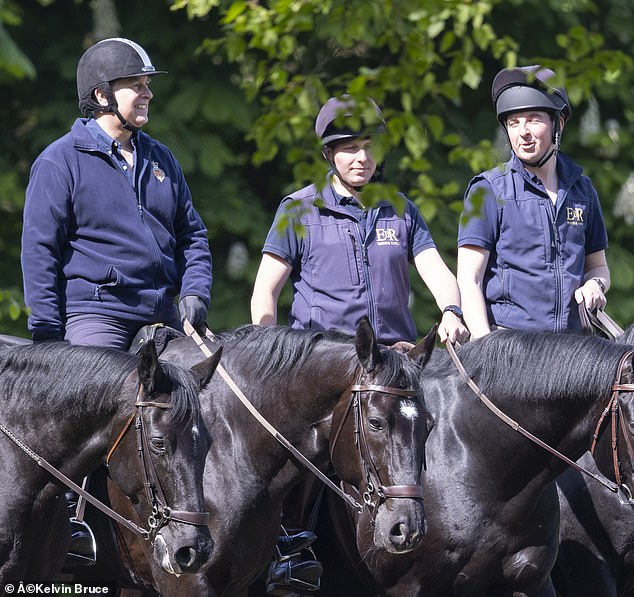 The Duke of York, 62, who reportedly arrived in his £220,000 Bentley, which features a DOY plate, for the Christening service, was seen today enjoying an early ride before The Royal Windsor Horse Show begins next week.

Andrew missed the birth of Sienna in September because he was staying put in Balmoral, while the lawyers for American accuser Virginia Giuffre tried to serve him with legal papers in person.

The Duke of York has made himself scarce since he agreed to pay Virginia Giuffre an estimated £7million to settle her sexual abuse lawsuit against him without accepting liability.

Meanwhile, it has been reported that the Queen won’t strip her son of the title that she gave him over 30 years ago in 1986, royal sources have claimed.