Princess Charlene of Monaco has shared adorable snaps of twins Gabriella and Jacques on their first day of school.

The mother-of-two, 40, posted a series of pictures of the young royals, three, dressed in matching white polo tops and jeans, ahead of their first classes on Wednesday.

One sweet snap shows Gabriella affectionately reaching up to hug her brother as they prepared to meet their new schoolmates.

Another photo shows her confidently leading Jacques into the school, while both showing off their colourful backpacks. 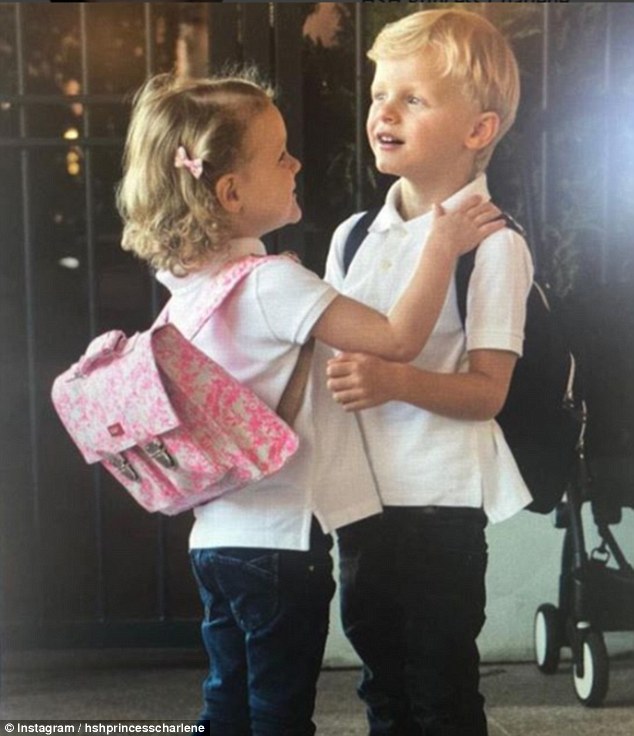 Princess Charlene of Monaco has shared adorable snaps of twins Gabriella and Jacques on their first day of school. Pictured is Gabriella reaching up to hug brother Jacques (right) 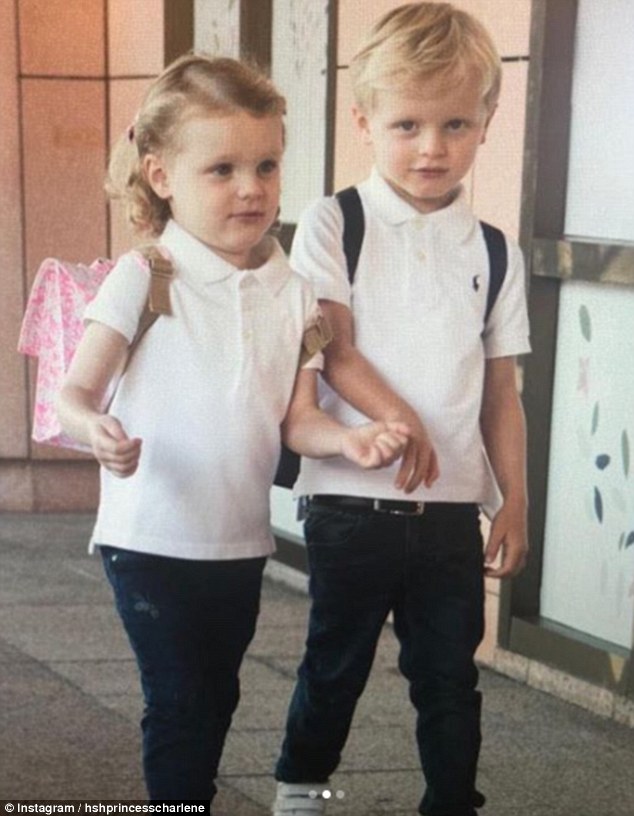 Gabriella and Jacques, both three, were pictured sticking close together as they walked into the school together. It is not known which school the pair are attending

Sharing the pictures on Instagram, Charlene simply captioned the images: ‘First day of school.’ It is not known which school the pair are attending.

The proud mother regularly shares photographs of her twins on her account, which has over 78,000 followers.

Earlier this month, she posted a picture of the pair kissing a penguin at a mini zoo, which she captioned ‘Happy feet’.

In fact, both Gabriella and Jacques appear to have enjoyed their summer holddays, with the twins joining parents Charlene and Prince Albert at a day of fun at the Prince’s Palace in June. 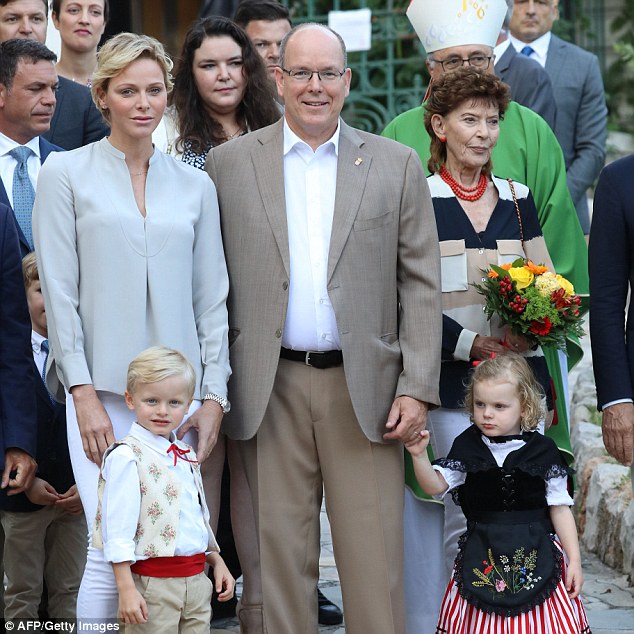 Gabriella and Jacques appeared to have enjoyed their summer, attending the traditional Monaco picnic with parents Prince Albert and Charlene (pictured together above) in August 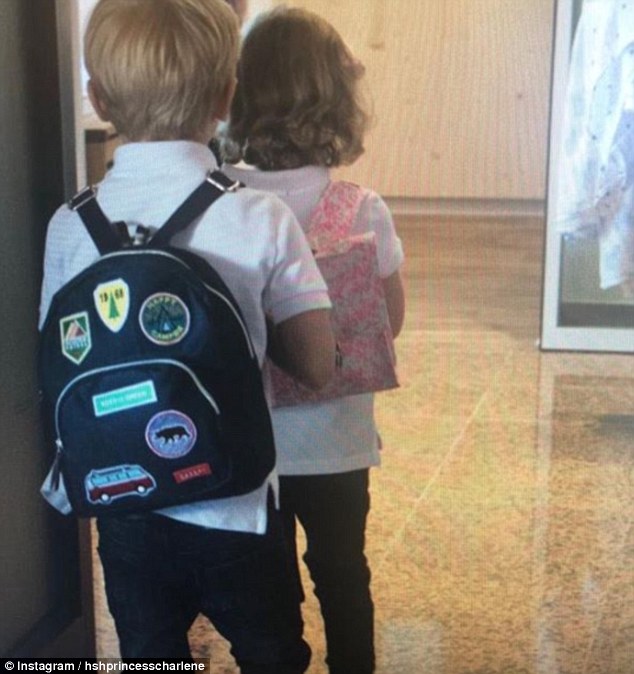 Another photograph shared by Charlene shows Gabriella and Jacques walking into school, while showing off their colourful backpacks

Meanwhile, Jacques joined his parents for a day of watersports at the Riviera Water Bike Challenge.

The twins were also clearly enjoyed the Monaco Grand Prix in May, with Charlene sharing a cute picture of the pair driving a model race car ahead of the race.

Gabriella and Jacques were born two minutes apart on 10 December, 2015.

While Gabriella is actually older than her brother, he is heir to the throne due to succession laws in Monaco that give precedence to the first born son. 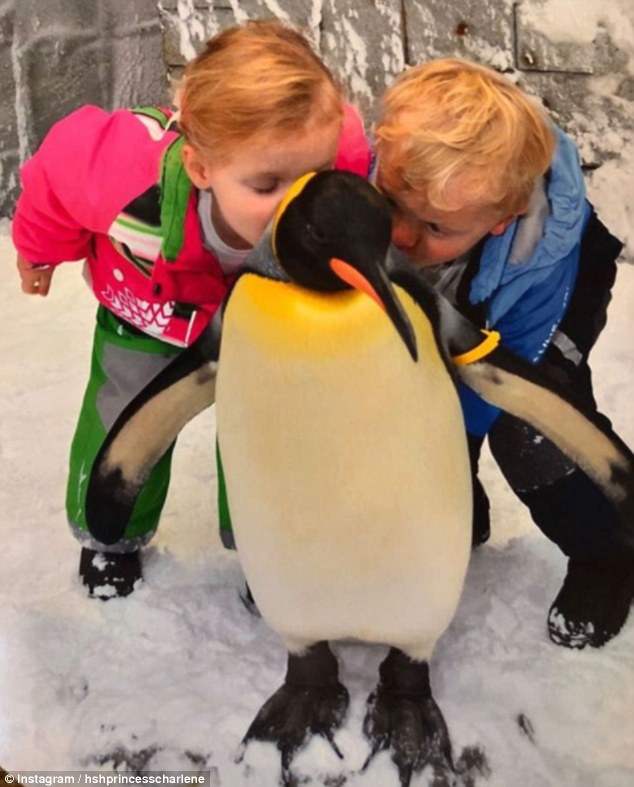 Charlene regularly shares snaps of her two children on Instagram, including this picture of Gabriella and Jacques kissing a penguin during a trip to a mini-zoo 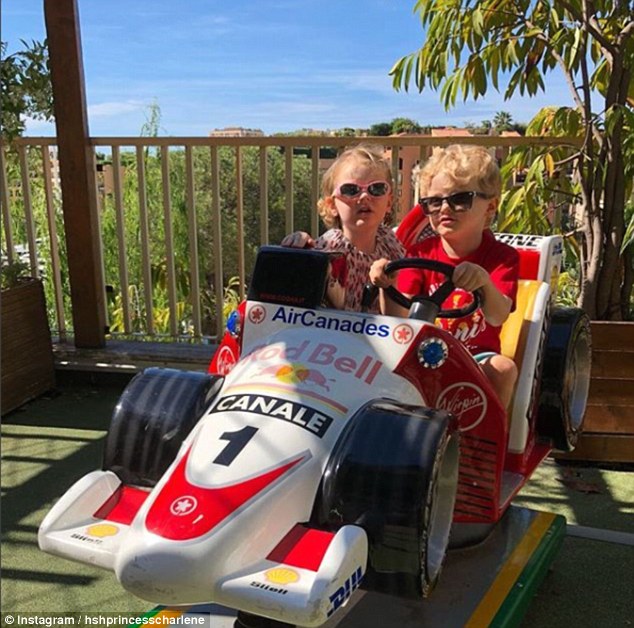