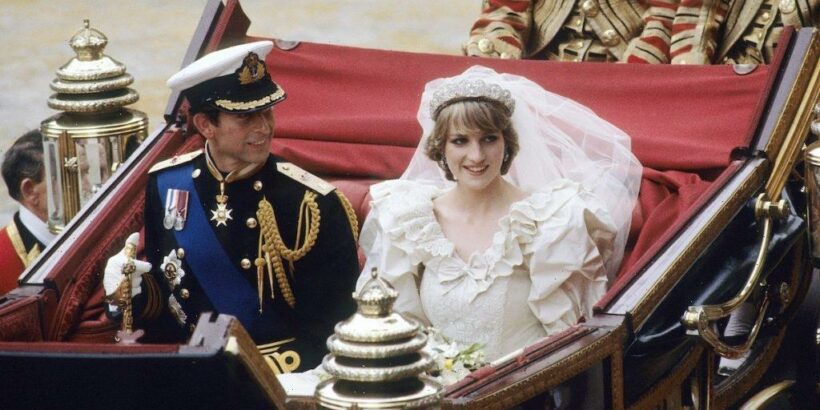 Princess Diana and Prince Charles captivated a generation with their fairytale wedding. On July 29, 1981, the couple exchanged vows as the world looked on with hope and anticipation for the future of England.

A year after the extravagant ceremony, the couple gave birth to their first son, Prince William. In 1984, Prince Harry was born. Unfortunately, there was no happy ending to be had for the royal family.

In 1992, under intense scrutiny from the world’s tabloids, Princess Diana and Prince Charles separated. In 1996, the couple divorced, and the Princess of Wales relinquished all future claims to the throne. The following year, she died in a car accident.

The marriage of Princess Diana and Prince Charles appeared to be an idyllic matrimonial ceremony was actually a break from tradition, with indications of trouble from the start.

For the first time in 25 years, the gown worn by Princess Diana in 1981 for the royal wedding is on display at Kensington Palace in honor of what would have been her 60th birthday.

The unforgettable 25-foot sequin-encrusted train filled St. Paul’s Cathedral as Princess Diana walked down the aisle on her wedding day. The accompanying 459-foot-long tulle veil was the longest of any royal wedding dress. The embroidery on the dress included lace, sequins, and more than 10,000 pearls.

The designers of the billowing ivory silk taffeta gown were sworn to secrecy in the months leading up to the ceremony. Despite the care exercised to create the iconic wedding dress, Princess Diana almost ruined it while preparing for the ceremony.

In the book Diana: The Portrait, her makeup artist revealed the nervous bride spilled perfume down the front of the gown. In an attempt to hide the stain, she held onto the soiled spot, pretending to lift it to avoid stepping on the flowing train.

More than 750 million television viewers tuned in from around the world to watch the Charles Diana wedding. According to Smithsonian Magazine, “The ceremony marked the first royal wedding held at St. Paul’s Cathedral since 1501.”

The elaborate wedding ceremony cost approximately $110 million by today’s standards. It was one of the “most expensive royal weddings in history.”

Heads of state and dignitaries were among the 3,500 guests in attendance at church. The Smithsonian reported only 120 individuals received an exclusive invitation to partake in the official wedding meal.

Guests that were not honored with a seat at the royal table had the option of purchasing a slice of souvenir wedding cake. The enormous 200-pound five-tier fruitcake stood at a staggering five feet in height.

The nervous prince forgot to kiss his bride at the altar, with many saying it could have been a sign of what was to come for the doomed couple. He attempted to make amends by kissing Princess Diana on the Buckingham Palace balcony as hordes of adoring well-wishers looked on.

The vows were also a sign of contention and unconventional according to the standards of royal weddings. Despite many heated discussions with her future husband, Princess Diana chose not to say “obey” during the vows. She also fumbled the pronunciation of her betrothed’s name.

The most peculiar break in tradition was related to Princess Diana’s lineage. According to Foreign Policy, most royal marriages were arranged to “serve a purpose,” being matters of “high-stakes diplomacy.” Love rarely played into the equation. Princess Diana was the first British citizen to marry a royal heir to the throne in more than 300 years.