Behind the scenes at Trooping the Colour: Princess Eugenie treats fans to a glimpse inside Buckingham Palace as she shares a snap of Prince Andrew posing in a corridor lined with historic paintings, busts and urns

Proud Princess Eugenie has given royal fans a rare glimpse inside Buckingham Palace after sharing a candid snap of her father Prince Andrew on Instagram.

The royal, 28, shared the snap to celebrate her father’s first Trooping The Colour as Colonel in Chief of the Grenadier Guards, an honour bestowed on him by the Queen in March.

‘A wonderful and proud day celebrating Her Majesty’s birthday and @hrhthedukeofyork for his first Trooping the Colour as Colonel in Chief of the Grenadier Guards,’ she wrote.

Saturday’s Trooping The Colour saw him ride out on the mall for the first time in full regalia and bearskins, alongside the Prince of Wales, the Duke of Cambridge and Princess Anne.

Smiling Andrew, 58, looked smart in his regimental uniform as he posed in a corridor adorned with busts, paintings and huge free-standing urns. 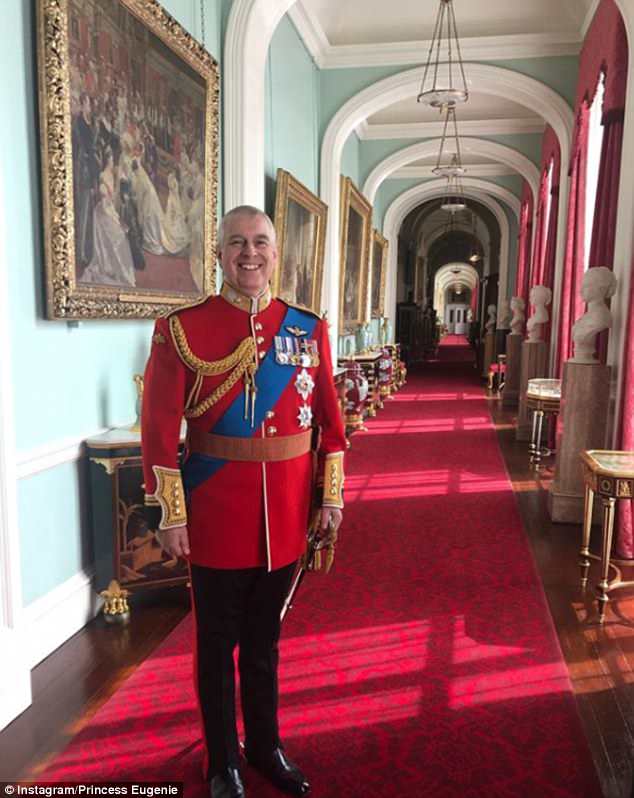 Proud Princess Eugenie treated fans to a rare glimpse inside Buckingham Palace as she proudly shared a snap of Prince Andrew on Instagram. Her father posed in front of a portrait of Queen Victoria’s granddaughter on her wedding day 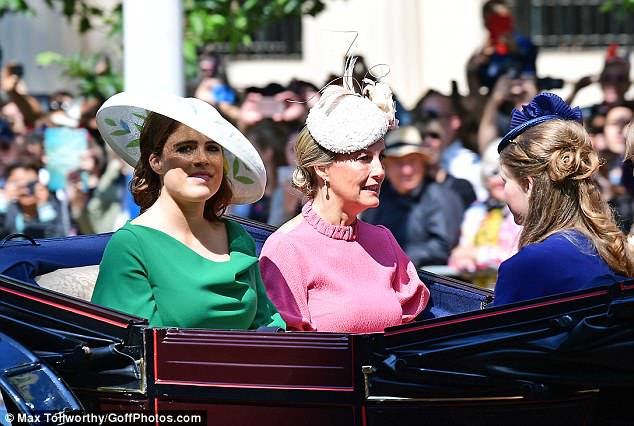 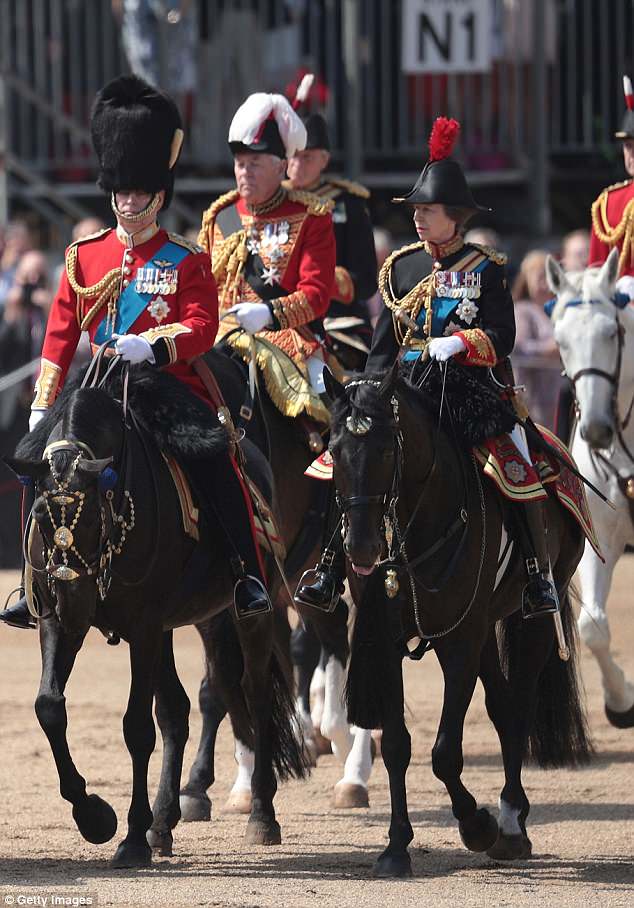 Prince Andrew joined the ceremony on horseback for the first time, alongside Princess Anne

An eagle eyed royal fan commented that the painting seen over his shoulder was of the wedding of Princess Maud of Wales, a granddaughter of Queen Victoria, who commissioned Laurits Regner Tuxen.

The snap delighted royal fans with many commenting on how handsome the Duke of York looked in his uniform, while others were pleased to see him looking so happy in the photo.

Saturday’s Trooping The Colour saw him ride out on the mall for the first time in full regalia and bearskins, alongside the Prince of Wales, the Duke of Cambridge and Princess Anne.

Most members of the royal family do no have their personal Instagram accounts open to the public, but Eugenie is an exception.

And since opening her account several months ago, she’s delighted fans with her sense of humour and candid snaps. 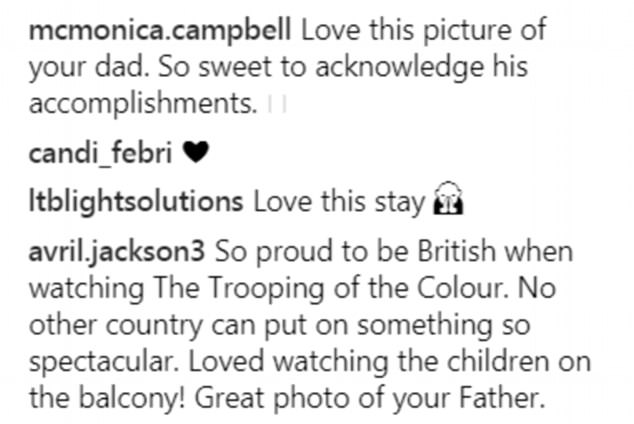 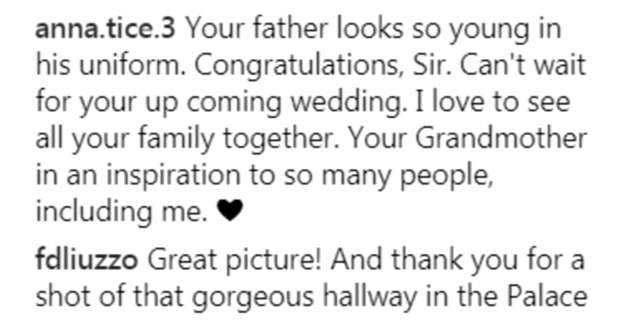 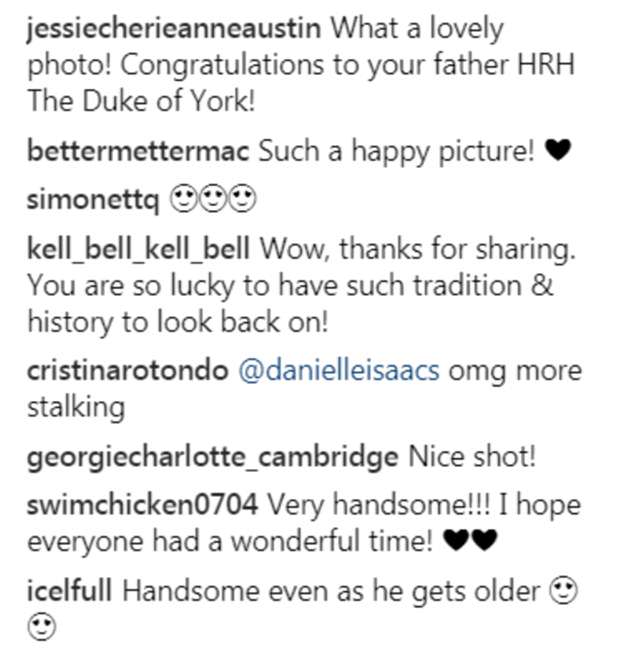 Recently she shared previously unseen photos of herself holding court at a Buckingham Palace reception, joking in the caption: ‘In my next life looks like I could be a comedian.’

Earlier this month she she shared an unseen family snap with her sister Beatrice and parents the Duke and Duchess of York.

’90s flashback with Bea and parents to when my father commanded HMS Cottesmore,’ she said. 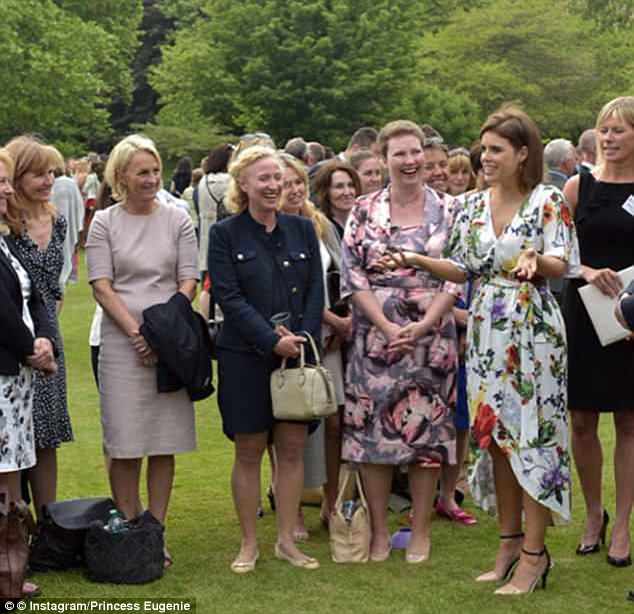 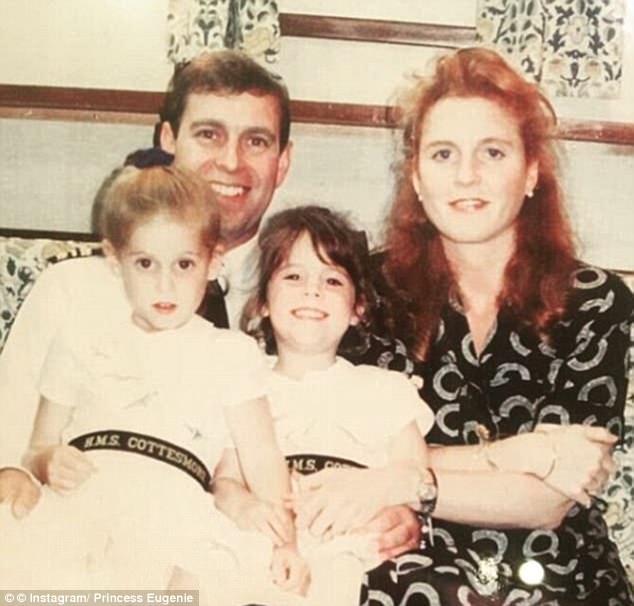 Flashback! The image shows the young princess and her sister Beatrice, now 29, sitting on the laps of their parents, the Duke and Duchess of York, on board HMS Cottersmore