My, how they’ve grown! Princess Mary, 48, stuns royal fans with new photos of her four children to mark the end of their Danish summer holidays

Princess Mary has shared candid snaps of her family from their summer holiday in Denmark, offering a glimpse at how the royal family spend their downtime.

The 48-year-old mother-of-four shared photos with her husband Prince Frederik, 52, and their four children: Prince Christian, 14, Princess Isabella, 13, and twins Princess Josephine and Prince Vincent, both 9, in Denmark.

The portraits captured by royal photographer Franne Voigt include one of the family standing in a doorway, and separate images of the girls and boys together, arms wrapped around one another.

There is also a photo of the family-of-six walking through a garden together. 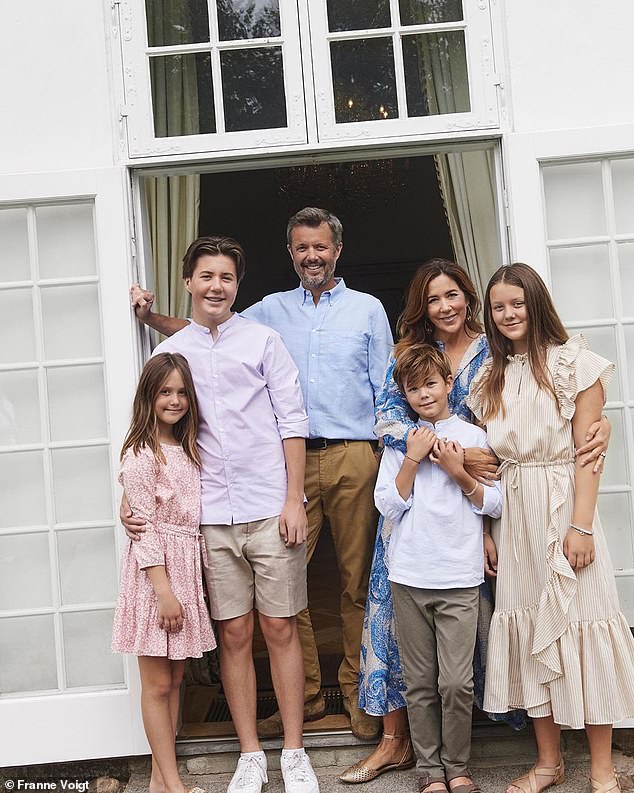 Princess Mary has shared candid snaps of her family from their summer holiday in Denmark, offering a glimpse at how the royal family spend their downtime (the family pictured)

‘Another summer went by,’ the family posted on their royal Instagram page.

‘All six of us enjoyed it around Denmark, and here on this year’s last summer day we send a late summer greeting.’

Royal fans were quick to comment on how grown up the royals’ four children look, with one commenter describing them as the ‘most beautiful royal family in Europe’.

‘The children are so grown up! Beautiful family,’ one person wrote.

‘The children have grown so much during this summer! The Crown Prince and Crown Princess are aging like a fine wine,’ another added. 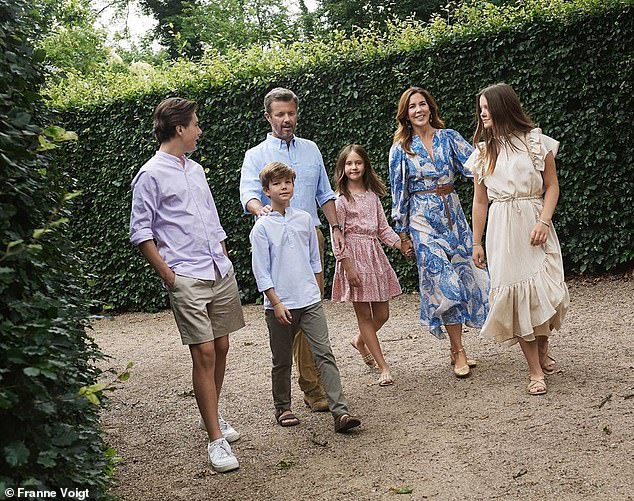 After seeing the portraits (pictured), many said the family are clearly ‘the most beautiful royals in Europe’ 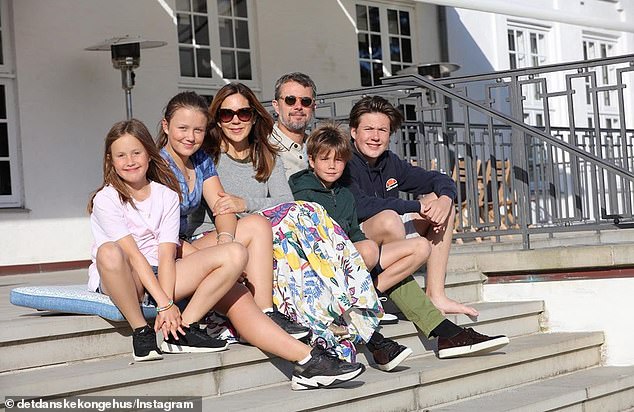 The vacation previously took in a stay in Gråsten, Denmark, at Gråsten Palace, which is the official summer residence of the Danish Royal Family – and Princess Mary shared rare candid snaps of the family-of-six there (pictured)

This year, Princess Mary, Prince Frederik and the children have enjoyed a ‘staycation’ in Denmark on account of the ongoing coronavirus pandemic.

During the summer, they have spent some time relaxing in the celebrity hotspot of Skagen, a town in the northernmost point of Denmark.

Their vacation previously took in a stay in Gråsten, Denmark, at Gråsten Palace, which is the official summer residence of the Danish Royal Family – and Princess Mary shared more candid snaps of the family-of-six while they were there.

‘A couple of wonderful memories from the summer in the beautiful Gråsten,’ the family captioned a set of photos shared to the royal Instagram page.

‘With the desire for a continued good summer – preferably with a little more sunshine.’ 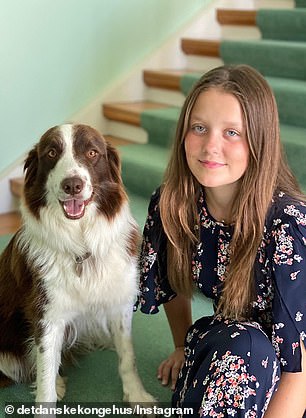 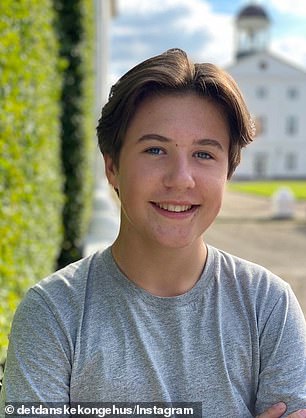 One picture showed Princess Isabella posed inside the palace, sitting on a stairwell with the family’s border collie, Grace (left), while another showed Prince Christian on the grounds of the palace, smiling as he stood alongside a bright green hedge (right) 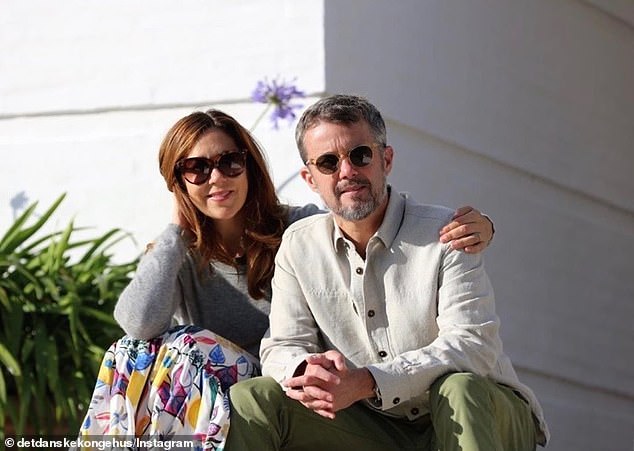 ‘A couple of wonderful memories from the summer in the beautiful Gråsten,’ the family captioned a set of photos shared to the royal Instagram page (one of the images pictured) 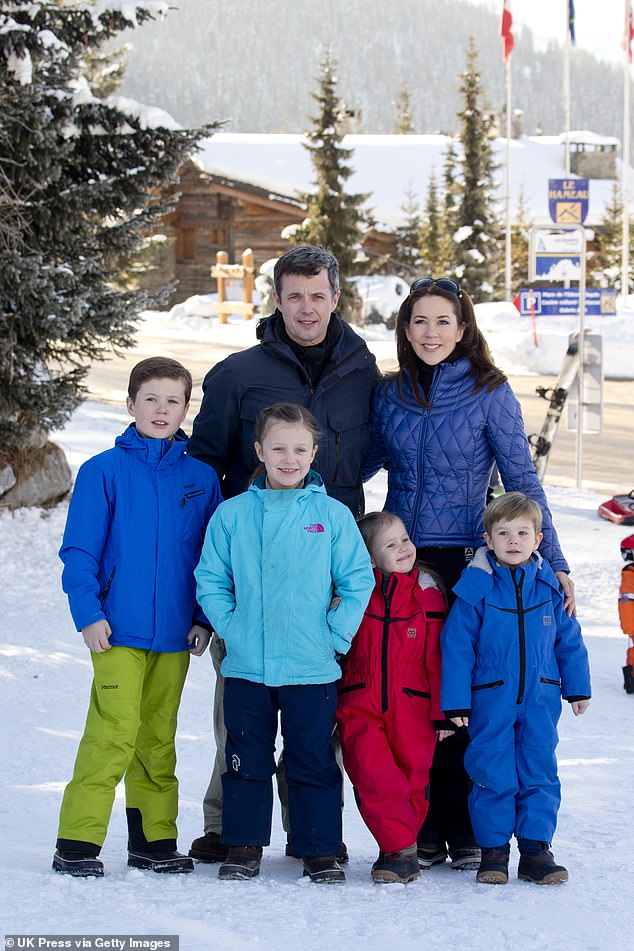 The royals have been known to visit Skagen most summers for the past few years, taking it as an opportunity to step away from busy royal life and enjoy time relaxing with friends.

While there, the couple typically enjoy a range of activities – from swimming to sailing and playing tennis at Skagen Tennis Club as well as long coastal walks.

The family chose to return to their spring and autumn residence from southwestern Switzerland, where the children had been taking a 12-week course at the Lemania-Verbier International School.

They usually attend the Tranegård School in Gentofte, Denmark, but had been studying at the Swiss boarding school to further their overseas experience.

Denmark gradually lifted its lockdown from April 14, but Mary and Frederik appeared to stay home until mid-May, offering rare glimpses into their personal life by sharing sweet family photos on their official Instagram. 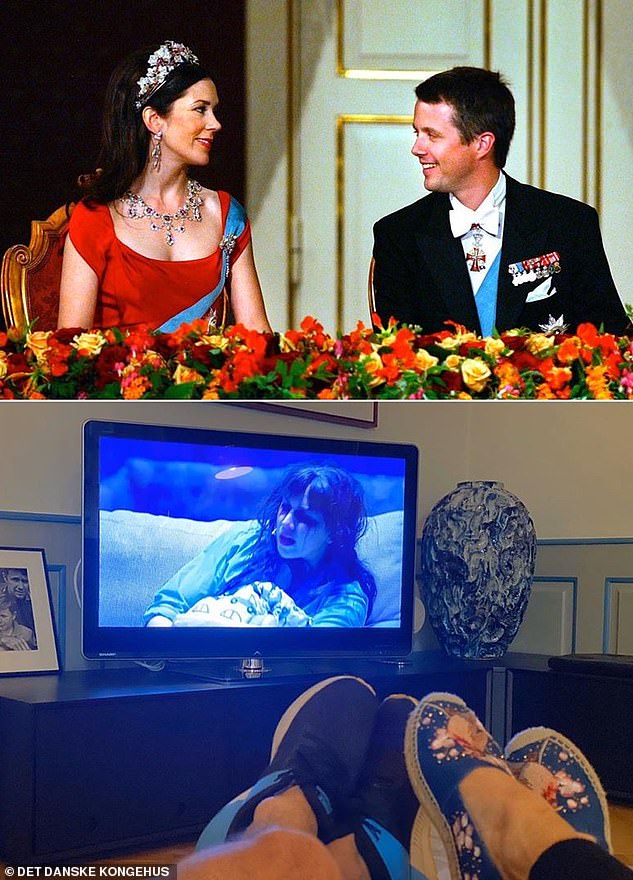 A collage of photos posted by Crown Princess Mary and Crown Prince Frederik on Instagram. The top shows the newly married royals at Copenhagen’s Royal Theatre in 2004, while the bottom shows the couple watching a televised theatre production at home on May 9, 2020

During lockdown, the Danish royal family proved they’re just like the rest of us with a snap from May 9, which shows them watching a televised performance of ‘The College Songbook’ from their sofa, casually dressed in leggings and sneakers.

The future king and queen contrasted their cosy night-in with a photo from 2004 – the year they were married – which shows them in glamorous evening attire watching a production from the royal box at Copenhagen’s Royal Theatre.

The striking difference between the photos highlighted how life had changed since the outbreak began, with royalty forced to adapt to confinement just like everyone else.