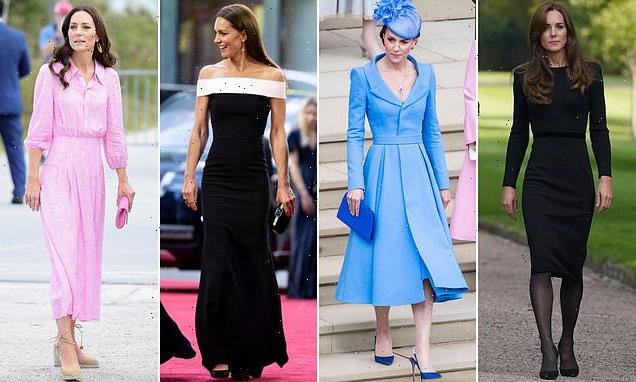 Kate’s top looks of 2022: Princess of Wales’ most searched-for outfits include daring off-the-shoulder gown she wore to Top Gun premiere

A new study reveals Kate Middleton’s most popular dresses of the year so far, including a black Alexander McQueen dress worn at the late Queen’s funeral, and an off-the-shoulder number for the Top Gun premiere.

The research, by fashion experts at Karen Millen, analysed Google Trends data from the last year to discover which of the royal’s dresses have generated the most buzz online.

A spokesperson for Karen Millen said: ‘Ever since her introduction into the Royal family, Kate Middleton has made a vast impression on the fashion industry, well known for her timeless style and sophisticated outfits.

‘These findings demonstrate Kate’s ability to inspire fashion choices up and down the country, with the British public rushing to take inspiration from her tasteful wardrobe.

‘This research also highlights Kate’s enduring and admirable ability to discreetly use her elegant style to compliment the events she attends, yet not divert too much attention away from the main focus of the occasion.’ 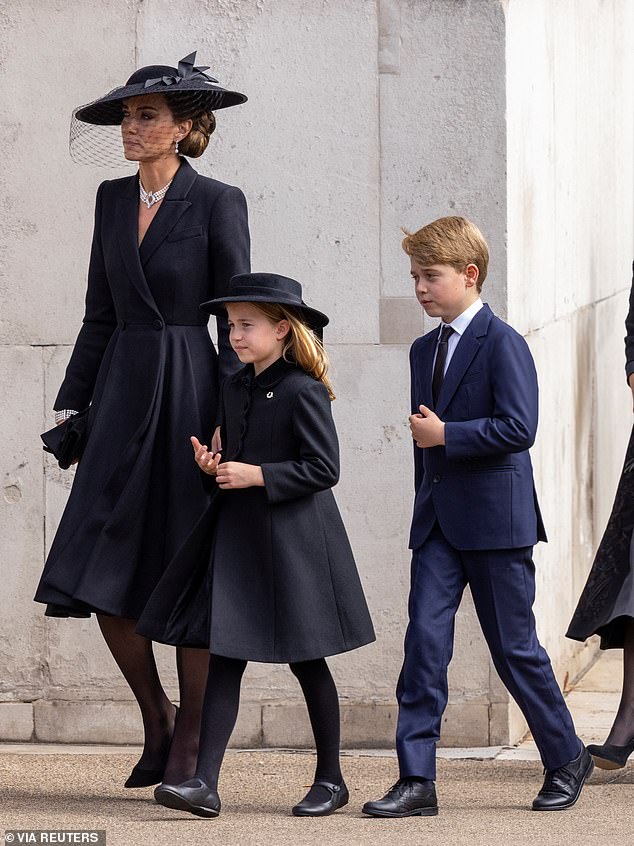 Kate, Princess of Wales, Princess Charlotte and Prince George attend the state funeral and burial of Queen Elizabeth II, Kate wore an all black Alexander McQueen dress and a necklace given to her by the late monarch and was once loaned to Princess Diana

Late designer Alexander McQueen, who died in 2010, is a favourite of A-listers and royalty alike, and his looks are a common feature at celebrity events such as the Met Gala.

Kate seems to favor the brand, having been seen many a McQueen dress this year.

The coat dress was paired with a veiled hat, stilettos and pearl jewelry from the Queen’s collection – clearly selected to honour the late monarch –  and Kate accessoried with the same she wore to Prince Philip’s funeral. 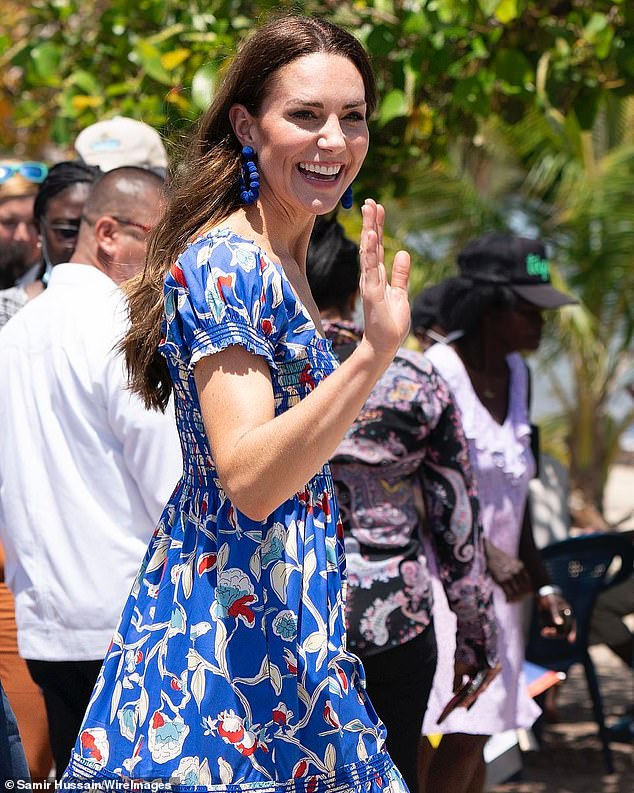 Kate, 40, in a £500 red and blue floral midi-dress by Tory Burch, the colours of Belize’s flag- she finished off her look with a fan-shaped clutch bag by British designer Anya Hindmarch

The Princess of Wales wore this floral creation on the Belize visit of her and Prince William’s Caribbean tour in March, in honor of the Queen’s Platinum Jubilee.

The casual summer dress was the perfect blend of political astuteness and fashion, in a cleverly crafted signal of respect from the Princess to the people of Belize.

Kate’s third most influential dress of the year is her black Jenny Packham.

The Princess of Wales wore this simple black dress on a walkaround tribute to the Queen around Windsor Castle back in September. Kate paired the dress with pearl earrings, black heels, and black tights – an elegant but respectful look.

Designer Jenny Packham is known for her polished ensembles and spoke out this year saying: ‘Lockdown has made us lazy with fashion’.

One person however, who could never be accused of being ‘lazy’ with fashion is classy Kate, whose outfits inspire millions of aspiring fashionistas all over the world.

Kate stunned in this off-the-shoulder gown she wore to the Top Gun film premiere in London, back in May.

The Princess of Wales hit headlines all over the world for this Bond-girl-esque, figure hugging look – despite the gown being a slight deviation from her usual style, the royal remained classy, showing just a hint of skin in the dress.

The mother of three attended the pageant with Prince George, Princess Charlotte and Prince Louis

Following closely behind, Kate’s fifth most popular dress is her Fuchsia pink Stella McCartney she wore to the Platinum Jubilee Pageant in June.

For the joyous occasion, Kate’s custom dress featured a mid-length skirt, padded shoulders and long puffy/bishop sleeves, which she paired with statement earrings.

This bright, monochromatic look is classic Kate, with a ruched front and puffed sleeves , and a touch of definition around the waist.

The Princess often opts for less is more when it comes to fashion – avoiding over-the-top ruffles and frills and fans can’t get enough of her style.

6. Pink dress by RIXO in the Caribbean

She paired the shirt dress with a matching £370 clutch bag by Emmy London and £160 wedge heels by Spanish brand Castañer.

Gold earrings can be seen peeking out from behind Kate’s perfect blow-dry, another staple in the Princess’ repertoire. 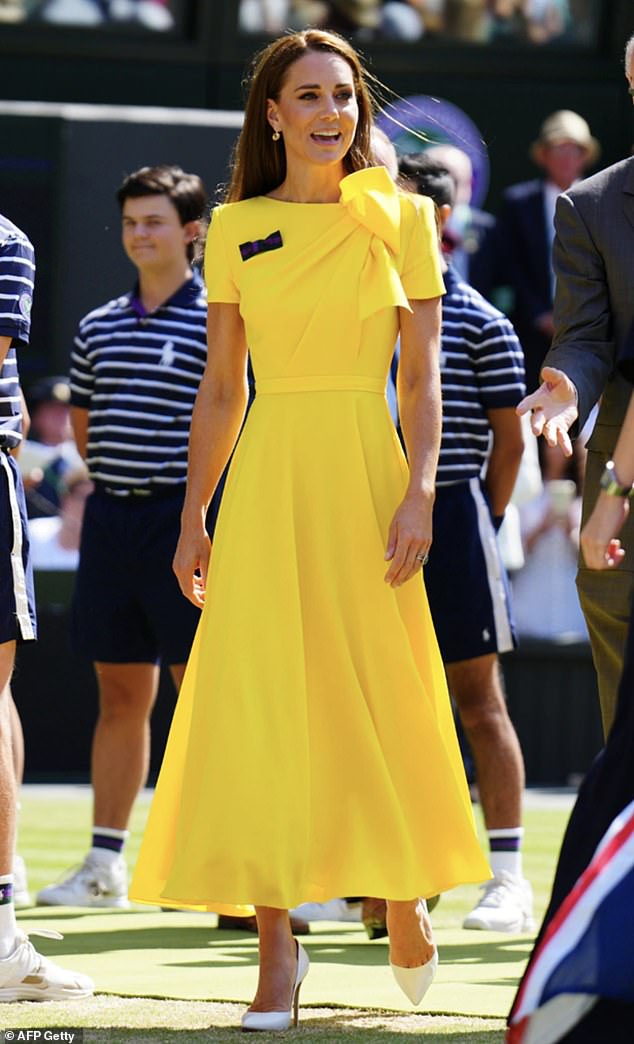 For the historic women’s final he joined stars including Tom Cruise and Ellie Goulding in the Royal Box for the thrilling match.

Kate looked summery for for the sporting event wearing a canary yellow Roksanda dress worn to the Wimbledon women’s final in July, standing out in the courtside crowd.

The dress featured a twist at the shoulder and a small black bow on the left lapel. She opted for white stilettos – letting the bold dress do all the talking.

For the historic women’s final the royal mother-of-three joined stars including Tom Cruise and Ellie Goulding in the Royal Box for the thrilling match.

8. Alexander McQueen for the Order of the Garter Ceremony 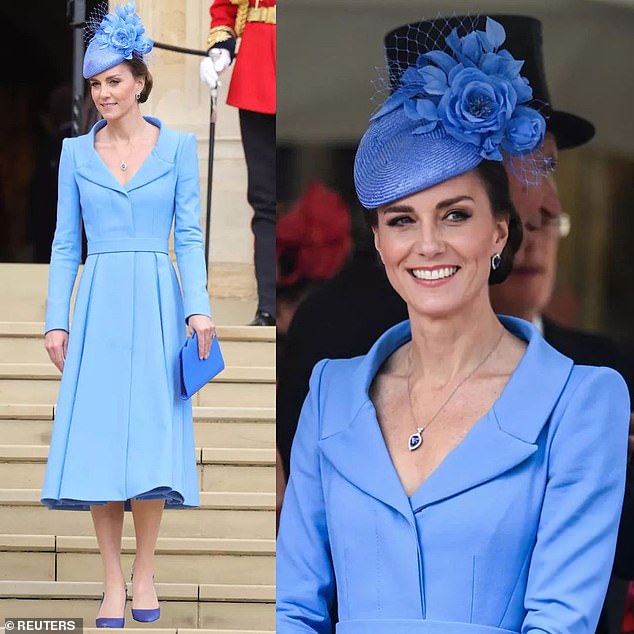 Kate’s blue Alexander McQueen dress worn to the Order of the Garter ceremony in June came in at eighth place.

Kate Middleton, 40, opted for a distinctive powder blue ensemble, which she paired with a matching £560 fascinator from Juliette Botterill and dazzling diamond earrings as she joined fellow royals for the event.

Emulating the late Queen, who also was fond of colour blocked outfits, Kate looks every inch the Princess. 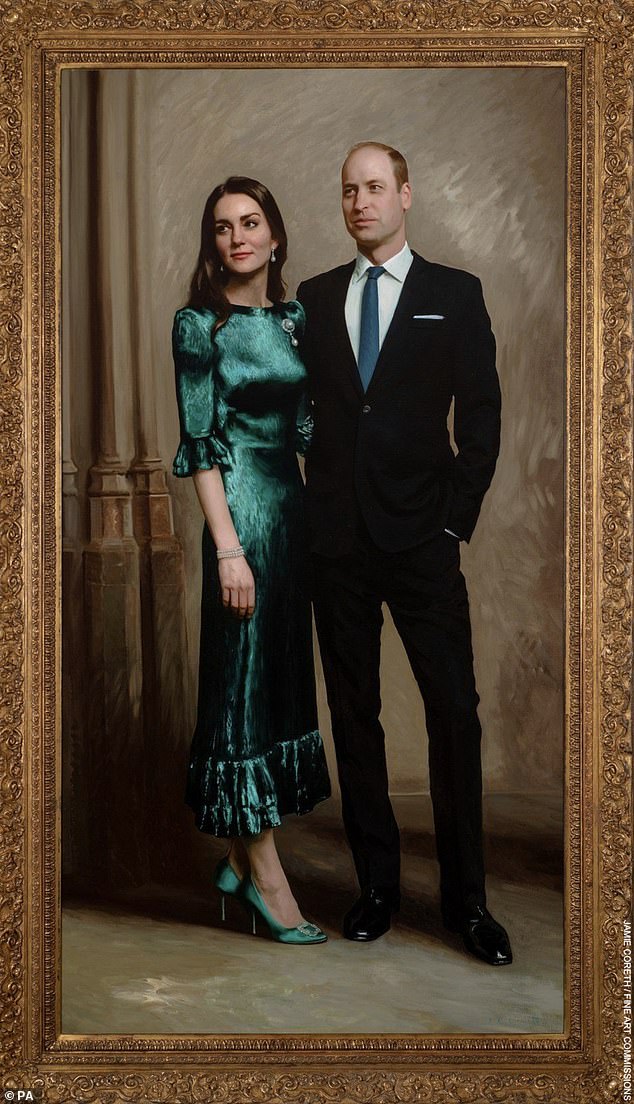 The artwork captures Kate looking ethereal in a £1,595  emerald gown by The Vampire’s Wife, which she first wore during a historic three-day visit to Dublin in March 2020. Sporting £875 Manolo Blahnik green satin pumps

This emerald green The Vampire’s Wife ‘Falconetti’ dress in ninth place, it was worn with matching green pumps for the first official portrait of the Prince and Princess of Wales.

The portrait looked elegantly ethereal, with the Princess of Wales proving she can pull of this unique 20’s inspired look.

She paired the deep green ankle length dress, valued at £1,595 with matching Manolo Blahnik pumps costing £875 and a pearl brooch on her lapel.

The painting was unveiled at the Fitzwilliam Museum in Cambridge in June of this year. 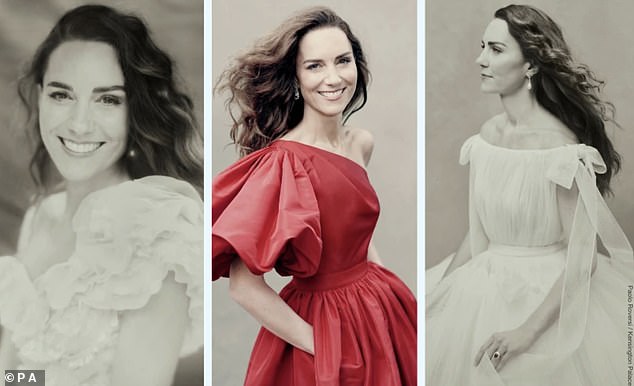 For her 40th birthday portraits the royal wore an array of Alexander McQueen dresses for her official portrait, showing her love for the brand.

The Princess of Wales showed she was fabulous at 40, in a bold, red one shouldered gown and an off-shoulder cream Grecian style dress.

A palace source said: ‘There is the regal side to her – as you can see in the classic shot where she is looking off into the distance; there is the more informal image in the red dress as a modern woman at 40; and then there is the close-up, which offers a more intimate perspective.’