A fairytale moment: Crown Princess Victoria of Sweden has tea with a seven-year-old girl with a rare brain tumor whose dream was to meet a real-life princess

Crown Princess Victoria of Sweden met with an adorable admirer on Thursday: a little girl with brain cancer.

The 42-year-old, who is heir apparent to the Swedish throne, invited seven-year-old Emilia to Royal Palace in Stockholm, where the pair chatted about what it’s really like to be a princess.

Emilia, who has a rare brain tumor called ependymoma, loves all things royal and expressed that her biggest wish was to meet the princess. 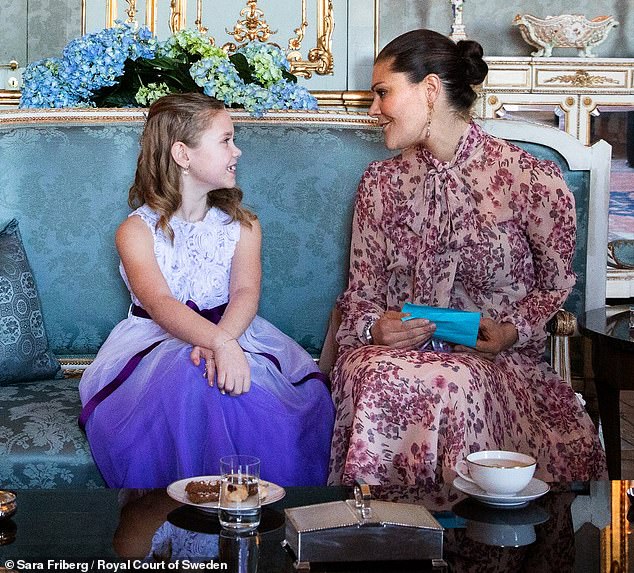 So sweet! Crown Princess Victoria of Sweden met with an adorable admirer on Thursday: a seven-year-old girl with brain cancer 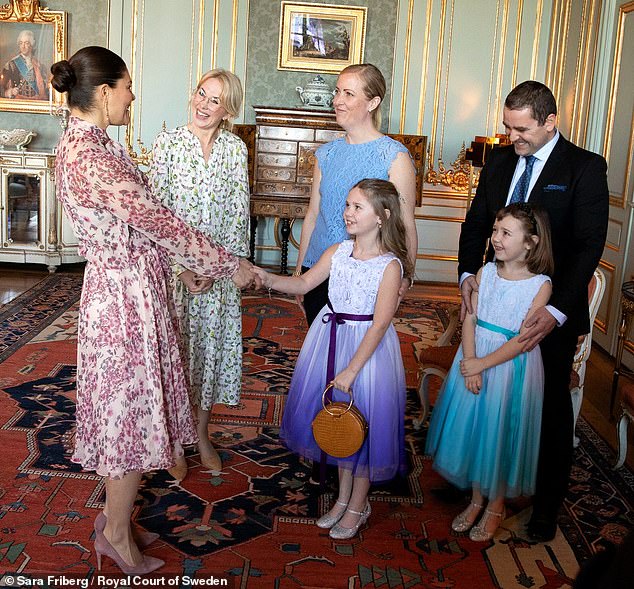 Enchanted: Emilia, who has a rare brain tumor called ependymoma, loves all things royal and expressed that her biggest wish was to meet the princess 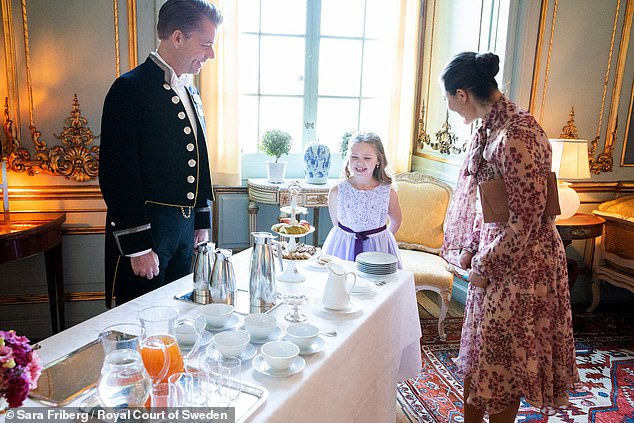 Tea for two: The meet-and-greet was set up by Min Stora Dag, which plans special days for kids with critical illnesses

The meet-and-greet was set up by Min Stora Dag, which means ‘My Special Day’ in Swedish.

The organization ‘makes a difference for children and adolescents with critical illnesses and diagnoses’ by gibing them ‘a Special Day that gives extra strength and happiness in a tough everyday life.’

For Emilia, the most special thing she could imagine was meeting Victoria, the eldest child of King Carl XVI Gustaf.

‘I wanted to ask Crown Princess Victoria what it feels like to be a real princess and if she also has a hard time in life sometimes, even though she is a princess,’ the little girl said, according to Min Stora Dag.

The two did chat, and Princess Victoria told Emilia how she needs a lot of hairpins to keep her tiara on her head, and that it is important to be careful when going down the stairs to the Nobel Prize banquet in long dress.

Emilia, who lives over 400 miles from Stockholn in a town called Trelleborg, loves to watch the Nobel dinner on TV and see the royals in their pretty dresses.

The little girl also had her own pretty dress for the occasion, wearing a purple number nearly identical to a blue dress worn by her sister.

In addition to talking, Emilia, her sister Maja, and her parents had tea at the palace, and Emilia and Maja got to play in the glamorous home.

They spent an hour together before Princess Victoria surprised Emilia with one last treat: a horse-drawn carriage ride from the King’s court stall through Stockholm.

Pictures show the happy little girl beaming throughout the visit. 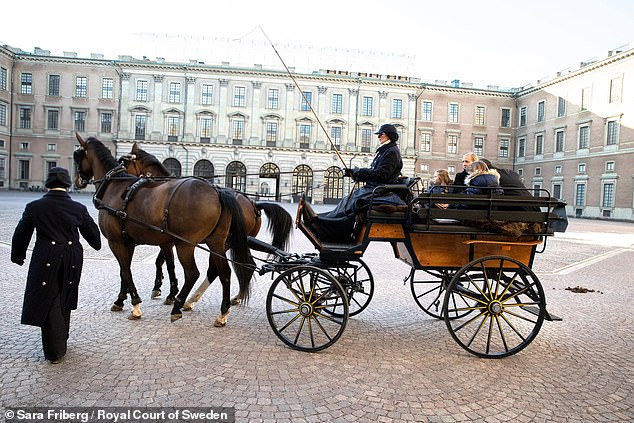 Horsing around: They spent an hour together before Princess Victoria surprised Emilia, who likes horses with one last treat 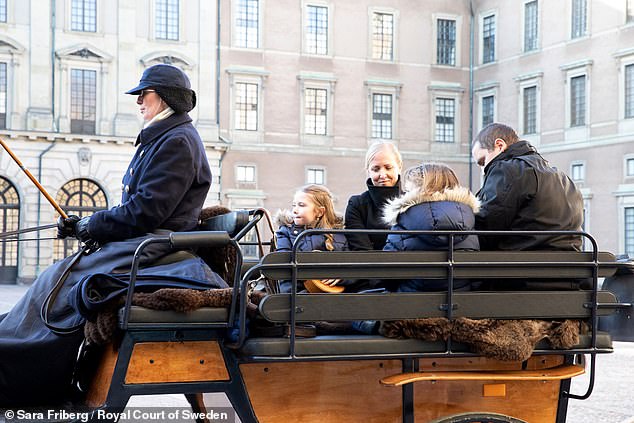 What a ride! They took a horse-drawn carriage ride from the King’s court stall through Stockholm

Princess Estelle gazed out from between her mother and father Prince Daniel in the snaps.

Her brother Prince Oscar, who will turn four in March, grinned beside her in the photograph, which was taken by Anna-Lena Ahlstrom.

The blonde-haired youngster was a picture-perfect princess in a navy bow, which kept her tresses away from her face. She also wore a navy dress.

In a second photograph, Princess Estelle, who is second in line to the throne, is pictured sitting alone with her hair neatly styled over one shoulder. 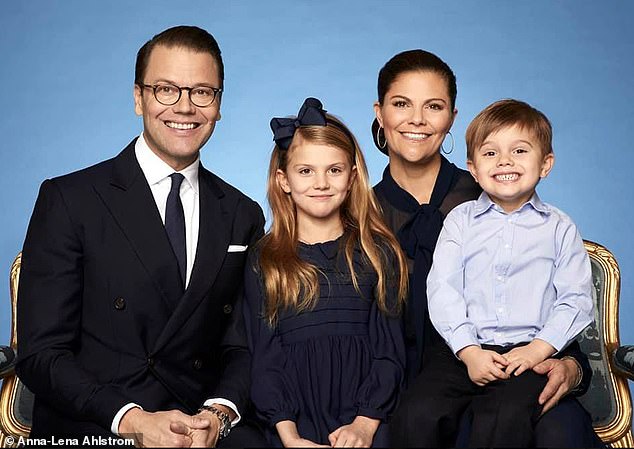 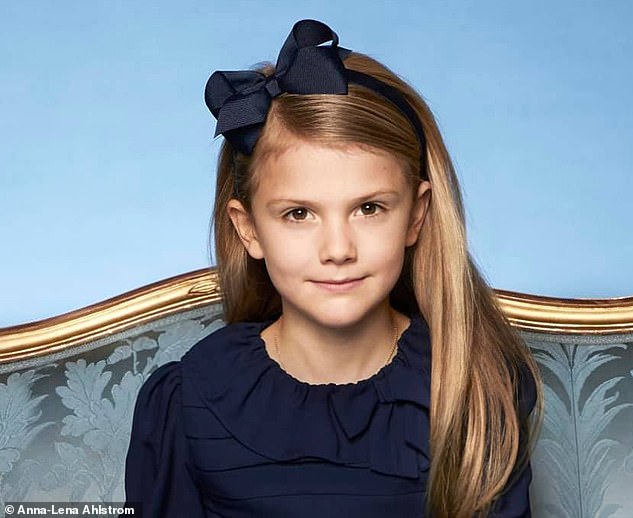 Cute: In a second photograph, Princess Estelle, who is second in line to the throne, is pictured sitting alone with her hair neatly styled over one shoulder

Days before the portraits were released, Princess Victoria and Prince Daniel announced the establishment of a royal foundation in their daughter’s name to ‘promote cultural activities’ and celebrate art.

Princess Estelle’s Cultural Foundation will ’emphasize the importance of art and culture to an open and modern society.’

The foundation, which was established last year, was unveiled by the Swedish Royal Family’s official Instagram account.

The announcement said that the foundation’s first project is ‘part of the quest to make contemporary art accessible to a wide audience.’

The Princess Estelle Cultural Foundation will be chaired by Johan Ericsson, with Prince Daniel on the board alongside Elin Annwall, the director of operations at The Crown Princess Couple’s Foundation; Lena Josefsson, chairman of the Friends of the Modern Museum; and Staffan Larsson, governor of the Court at the Royal Palace. 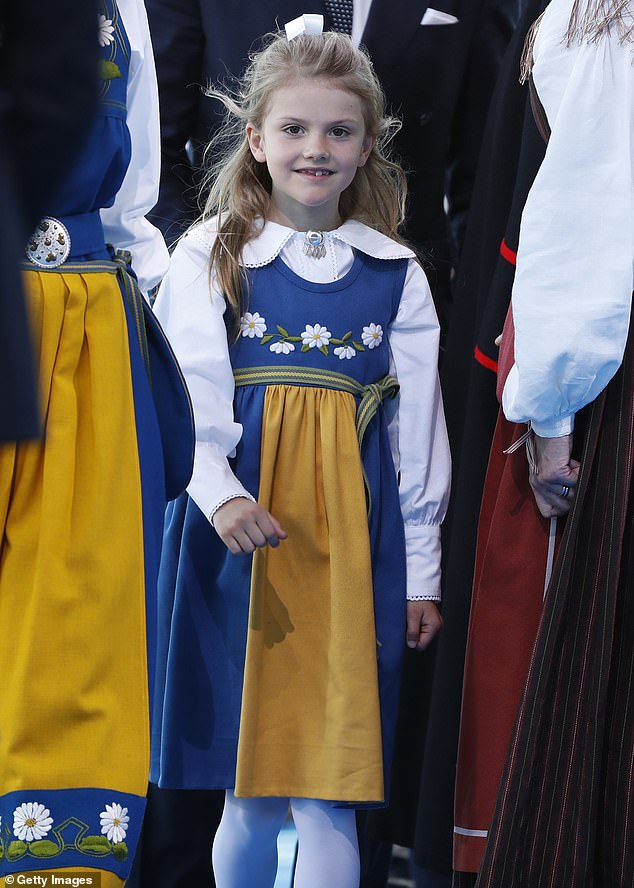 Charitable: Princess Estelle’s Cultural Foundation will ’emphasize the importance of art and culture to an open and modern society’

In a press release, business manager of the foundation Sara Sandström Nilsson said: ‘We want to make contemporary art available and to present sculpture at Djurgården is ideal from an introductory and interesting perspective.

‘It is an open space that is easy to visit, no entrance fees are charged and no prior knowledge is required. The hope is that the art experiences will lead to many unexpected conversations and generally increased curiosity for culture’.

According to Royal Central, the Princess Victoria and Prince Daniel hope to promote cultural life in Sweden and ‘actualize this and show long-term ambitions through the creation of Princess Estelle’s Cultural Foundation’.

The activities of the Cultural Foundation will be financed through private donations, the Royal Court confirmed.