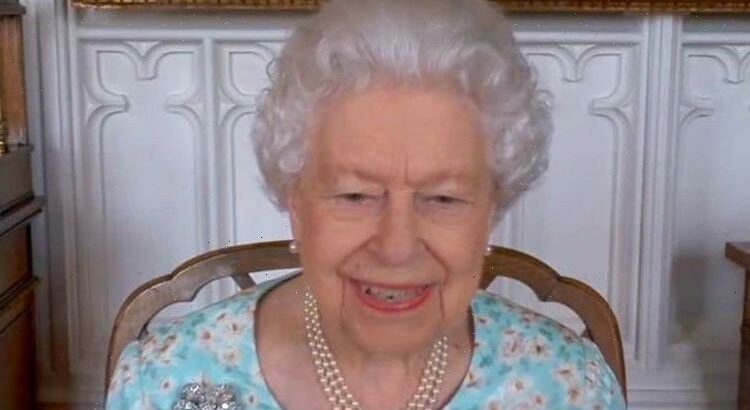 Queen Elizabeth II, 95, is Britain’s longest-serving sovereign but is also head of the Commonwealth. On Friday, she honoured her ties to its 54 countries during a video engagement with young leaders, supported by the Queen’s Commonwealth Trust (QCT).

Meghan Markle, 39, and Prince Harry, 36 were president and vice president of the trust but had to relinquish their roles following their decision to quit royal life for good.

The Royal Family shared several clips from the Queen’s latest engagement on Twitter in which she praised the work of the QCT’s young leaders.

The first tweet read: “This week, The Queen joined young leaders supported by @queenscomtrust to discuss their remarkable work.

“QCT supports young people across The Commonwealth who are driving change in their communities.

“#DYK people under 30 make up 60% of The Commonwealth population?”

A second tweet added: “The Queen spoke to Safaath Ahmed Zahir from the Maldives.

“In lockdown, @wdmaldives supported 130+ victims of domestic & sexual abuse by setting up a helpline.”

A third tweet read: “Jubilanté Cutting spoke to Her Majesty about her non-profit,

“Jubilanté thanked The Queen for her enduring support of @queenscomtrust and The Commonwealth.”

Throughout her 69-year reign, the Queen has never dramatically altered the way she communicates with members of the public and her continuity will be of great comfort to many, the expert claimed.

Judi said: “The Queen did seem to master the art of the video call meeting with her usual sense of continuity over lockdown.

“Even though she is speaking via a screen rather than face-to-face she appears to have retained her normal, face-to-face style of body language and communication in a way that has to be seen as impressive.”

The Queen chose to stay quiet and listen during the call, rather than pitching in, Judi explained.

She added: “Here she sits listening in silence as one of her online visitors report on their work and it is an unfazed and uncompromised position, with her lips sucked in slightly to signal she is not keen to interrupt and a slight lean forward of her head and small nods to register interest.

“When she speaks she is brief but adds a small laugh to register warmth.”

The Queen’s consistency will be reassuring to some during a time of global crisis, Judi claimed.

She added: “Her continuity of style seems to have survived even our current times of necessary change and evolution in a way that should probably be comforting to everyone keen to return to ‘normal’ life.”

Harry and Meghan have been based in the USA since last March and are expected to remain there long-term.

In February the couple confirmed they would not return to their formal royal roles.

A statement released by Buckingham Palace at the time read: “The Duke and Duchess of Sussex have confirmed to Her Majesty The Queen that they will not be returning as working members of The Royal Family.”

“Following conversations with The Duke, The Queen has written confirming that in stepping away from the work of The Royal Family it is not possible to continue with the responsibilities and duties that come with a life of public service.

“The honorary military appointments and Royal patronages held by The Duke and Duchess will therefore be returned to Her Majesty, before being redistributed among working members of The Royal Family.

“While all are saddened by their decision, The Duke and Duchess remain much loved members of the family.”