Mr Lewis, 45, accused Ms Onwurah and her fellow politicians of dissuading young people from attending university by framing fee repayment as a ‘debt’ that will burden them for years to come.

The personal finance guru argued an entire generation of young people had been ‘mis-educated’ about the impact student debt would have on their long-term finances and were therefore less likely to pursue higher education.

He said: ‘It is an abomination, you should all hold your heads in shame… It’s an increased form of taxation when you leave but is not framed as a debt, it shouldn’t be called a debt, it’s a graduate contribution system so don’t even go there.’ Praise: Martin Lewis, 45, was applauded by viewers for busting the myths on student debt

The explosive exchange was met with widespread praise from viewers who thanked Mr Lewis for his ‘plain speaking’. One hailed him a ‘champion of the people’.

The debate was sparked after a young audience member raised the issue of student debt during a wider discussion on the housing crisis.

She argued that rising tuition fees and increasing student debt was a factor in the struggle faced by many young people in getting on the housing ladder.

Mr Lewis replied by saying the term ‘student debt’ was misleading as the price tag of going to university is largely irrelevant and what matters more is how much an individual has to repay, which is based on salary.

That is to say that those who earn a lot after university will repay a lot while those who don’t gain financially from going to university – and therefore the people who are more likely to struggle with getting on the housing ladder – will repay little. 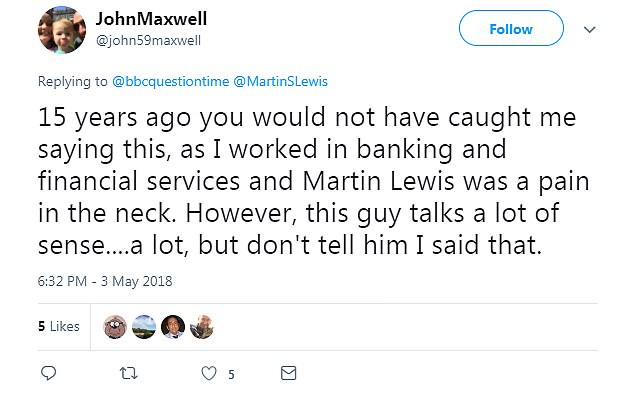 Online reaction: The majority of viewers thanked Mr Lewis, 45, for his ‘plain speaking’

Ms Onwurah, MP for Newcastle upon Tyne Central, began to make a point, saying: ‘If somebody, and particularly somebody from a working class background, if somebody has 57,000 in debt,’ but was quickly interrupted by a furious Mr Lewis.

Raising his hand and pointing his finger, he shouted: ‘Don’t tell them! Politicians do this all the time. You can’t make political points.

‘You put off young people from under-privileged backgrounds from going to university with a fear of debt by framing it as a debt when you know it doesn’t work like that.

‘Politicians need to take responsibility. Your political football that you and all the parties have used student finance to be has mis-educated a generation about how student finance works and it is an abomination, you should all hold your heads in shame because there are people from poor backgrounds on television – I saw a programme two weeks ago – saying “I can’t afford to go to university”. 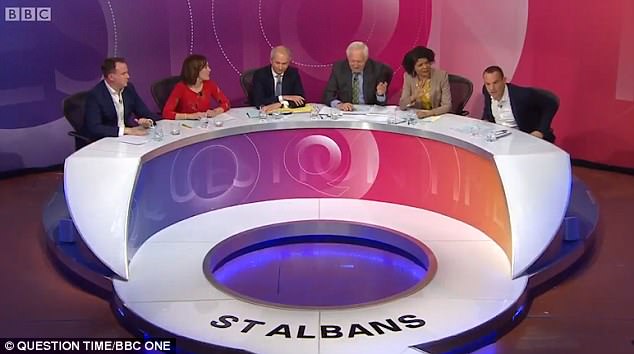 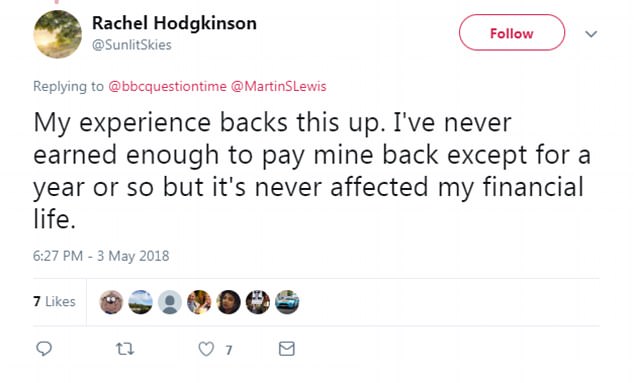 Support: Some viewers said they had first-hand experience backing up Mr Lewis’ points

‘Well, you know what, it is expensive, it’s an increased form of taxation when you leave but is not framed as a debt, it shouldn’t be called a debt, it’s a graduate contribution system so don’t even go there.’

The impassioned statement was praised by viewers on social media who thanked Mr Lewis for busting the myths around student finance.

However others disagreed, pointing to their own personal experience.

Ms Onwurah responded: ‘It is really, really important to recognise that tuition fees are an obstacle for students going into university. It’s pyschological but a lot of the world is psychological. How things are perceived is what informs people’s choice.

‘You can argue to re-educate, or you can argue, as we have done, to abolish tuition fees.’ Backlash: Other viewers disagreed with Mr Lewis and said he was ‘completely wrong’