The Bachelor franchise has its newest Bachelorette in Becca, but it’s always nice to check on some of America’s former Bachelorettes to see just how successful their journeys for love have proven to be. Think of it as showing Becca just how happy she could one day be with the man she chooses on the show. Former Bachelorette Rachel Lindsay started her relationship in controversy (which, natch, for any Bachelorette, really), but for now, she and fiancé Bryan Abasolo seem content and happy to be together. When are Rachel and Bryan from The Bachelorette getting married? They certainly seem to be taking their time in walking down the aisle.

When Rachel was the Bachelorette, she had one choice to make — Peter Kraus or Bryan Abasolo. While Peter seemed a better match for her in almost every way, he wasn’t sure that he could get engaged to someone he just met six weeks ago. While it’s surprising that a rational thought could stick on The Bachelorette, Peter stuck to his guns, and Rachel dumped him, because his position on proposing was a dealbreaker, and she was ready to be engaged. She chose Bryan, and the two are seemingly living happily ever after. They live together in Dallas, and, according to Bryan, the wedding is happening sooner than we all thought. 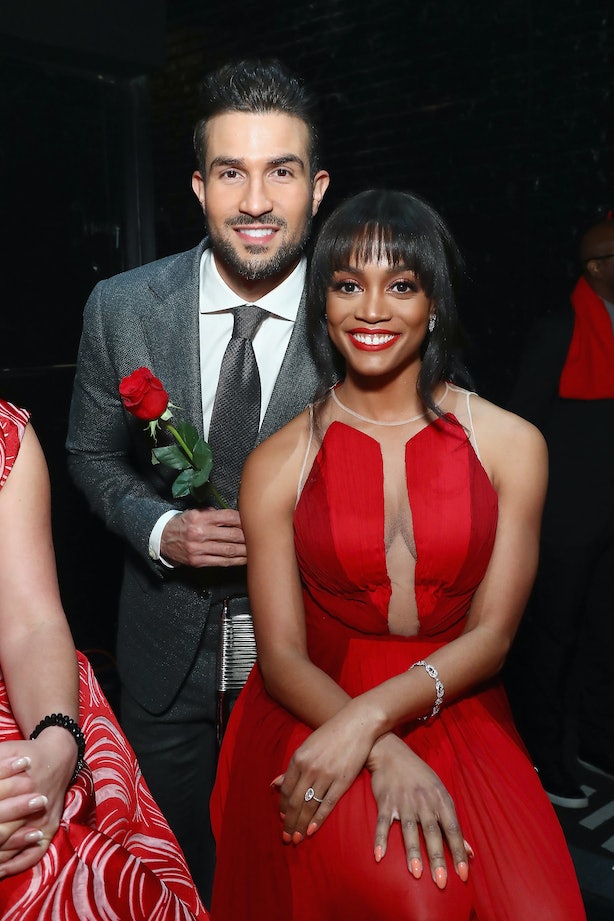 In an interview with ExtraTV, Bryan said, "We haven’t set anything yet. We definitely want to get married this year, and that’s the plan. 2018, it’s gonna happen.” There’s just one caveat — nothing has been planned. “The only thing is the details haven’t been worked out," Bryan continued. "Rachel isn’t much of a planner, so she’ll kind of deal with it as it comes along, but, you know, right now, we’re just taking our time." Bryan also said that he and Rachel would be open to a televised wedding “showing everybody how in love [they] are,” which, of course, they would. It’s a wedding on national television that you don’t have to pay for. Come on. If Bryan is right, there will be an Abasolo/Lindsay wedding in the next six months, and the only way to plan a big wedding in six months is to let ABC do it, so I’m guessing they will choose that whole “on TV” option.

And if you’re wondering, Rachel doesn’t talk to Peter. Like, at all, which is reasonable. Of her closure with Peter, Rachel told Us Weekly, “For me, the reason there was so much emotion [in the finale] was because that was closure for me, that was it. And I really haven’t talked to him because I don’t have anything else to say. From what I hear, he’s doing well too.” Rachel continued, expressing that she really wished that this whole Peter thing hadn’t overshadowed her engagement to Bryan. “I wish you were able to really see more of Bryan. [The breakup with Peter] really did overshadow, I felt, a happy moment for us, like one of the best moments of my life,” she said. “I’ve never been engaged before and neither has Bryan, and I felt like we were more on the defense about our relationship and having to explain more of it than rather it just showing … So I just wish you really got to see Bryan, and I hate that it took away from him.”

While Peter and Rachel had a really depressing and emotionally taxing breakup, all is well that ends well, it seems. Rachel has moved on with Bryan, and they’re getting married soon, and Peter has absolved himself from the franchise. While it has yet to be seen if Rachel and Bryan will really get it together in time to get married in the 2018 calendar year, the intent is there, and they’re ready to show their love to the world. I, like most other Bachelor Nation members, hope I can share in it in a televised way.