Dads have a huge impact on their daughters' wellbeing, influencing how they feel about their bodies, their talents, and what they will tolerate in a partner. "When dads take a genuine interest in and advocate for their daughter as a person – without trying to change her – that's when we see strong and confident women emerge," says psychologist Megan Tuohey.

"A father's role-modelling sets the clarity and expectations she should have when it comes to choosing whom she surrounds herself with."

In the age of the #MeToo movement, it has never been more important for dads to model a healthy masculinity. Sunday Life spoke to three fathers about their relationships with their daughters, how they raise them to fearlessly tackle the world, and their hopes for a fairer future.

The 33-year-old host of SBS Viceland's The Feed and wife, Madeleine Genner, are parents to Max, 4, and Sophie, 2. 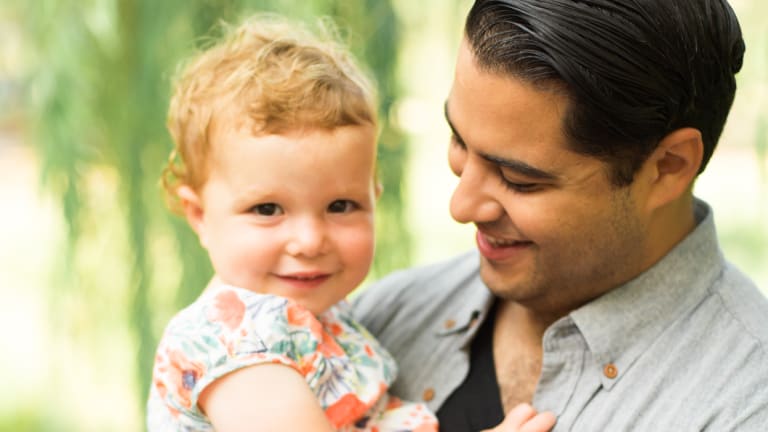 Marc Fennell and her daughter
Sophie.

"As a father parenting a daughter, it doesn't happen in isolation. My wife is a big part of it and so are my in-laws. Another big part of parenting in the age of #MeToo comes to how I parent my son. It's not just about teaching girls, it's about teaching boys how they should treat girls.

I think you can start teaching kids young, too. Consent, for example, doesn't have to be linked to sexual activity, and you can plant that notion early by saying, 'Sophie doesn't want you climbing on her,' and that is about teaching kids empathy and a bit of common sense.

Training a kid to look at how their behaviour is affecting those around them is a great idea, and fostering that emotional intelligence when they are young can really influence how they relate as teens and adults later in life.

When the #MeToo movement emerged, it was really noticeable at the time that a lot of guys were coming out and saying they didn't really notice sexism until they had a daughter. I found that infuriating. Did they not think that women should be equal until they fathered one?

But what the movement does do is make you reframe things as a dad. What you want to see when you look at your child is that everything is available to them, but what has become obvious is that institutions' attitudes haven't changed fast enough for that to be true.

But what you can do is constant small-course corrections. If Max is being too rough, we can curtail it. And if Sophie is being demure and quiet there are times that you need to put her on a pedestal to counter it. We have also bought lots of picture books with empowered girls, but we realised we were just reading those to Sophie and the usual books to Max. Actually, we need to shape his perception of the world as much as hers.

It doesn't hurt that I don't have a problem expressing myself, either; I think I love expressing my feelings probably more than anyone in the house. It's the worst cliché to say that as a dad all you want is for your child to be happy, but it's true.

I also want Sophie to feel safe to make the choices she wants to make. You can't be confident in going out in the world without that feeling of safety. Whether she wants to be an introvert or an extrovert, I hope that the world will make space for her to be as big or as small as she wants."

The chief creative officer of PwC and panellist on ABC-TV's Gruen has three children with wife Kate Burke: Charlie, 21, Louis, 16, and their only daughter, Claudia, 24, with whom the 53-year-old shares a lifetime passion for the Melbourne Football Club. 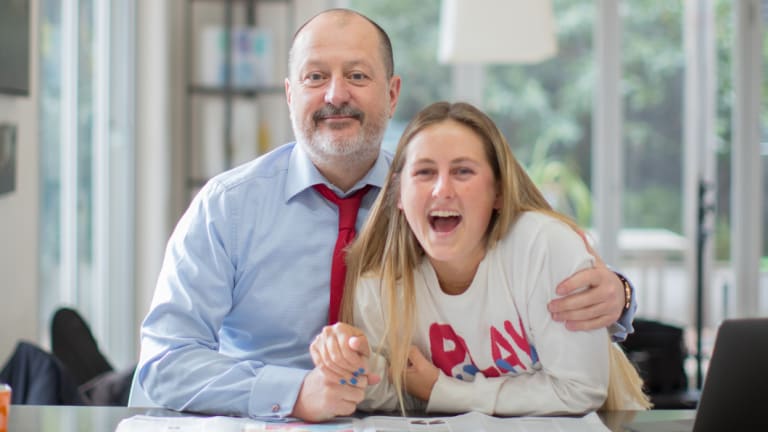 Russel Howcroft and his daughter Claudia.

"Growing up, Claudia was always fascinated by nature and the things that surrounded her. She would sit in the garden happily for hours and just watch what was going on. She has great observation skills and is very attuned to social dynamics. That is going to hold her in good stead, personally and professionally.

I am very proud of her ability to sit back and observe and not have to be the centre of attention. She can take the lead when she needs to, but she doesn't have to.

I did work really hard when she was younger, but I also worked hard at being around her as much as I could. I didn't think through the role of parenting or my approach to it, aside from the fact that Claudia had to barrack for the Melbourne Football Club, and I'm very pleased she is an awesome Melbourne supporter.

I did my best balancing my time and I tried to be there for all of the children as much as I could, but if it wasn't for my wife Kate, who is the anchor of our family organisation, I wouldn't have been one-fifth of the dad I was.

I am not sure if I parented Claudia differently to her brothers. The only thing I wished I had done was get her onto the football field. If she had done that she would have been a pioneer, and an awesome footballer.

In any case, Claudia is a very strong woman and she would be a very strong woman in whatever era she was born, #MeToo or otherwise. I have the absolute highest regard for her. I have always loved work and I'm enjoying watching her become addicted to it.

When I was younger, I had a mentor tell me not to make the same mistakes he had made. Of course, I ignored him. So I had a conversation recently with Claudia to tell her to look around her because there will be a fantastic mentor for her, and when she finds them, to listen to them because they will only have her best interests in mind.

I will always do my best to give her advice, but I think it's important for outside input. And maybe that additional input is not the father's role at this stage, but for someone else, such as a mentor." 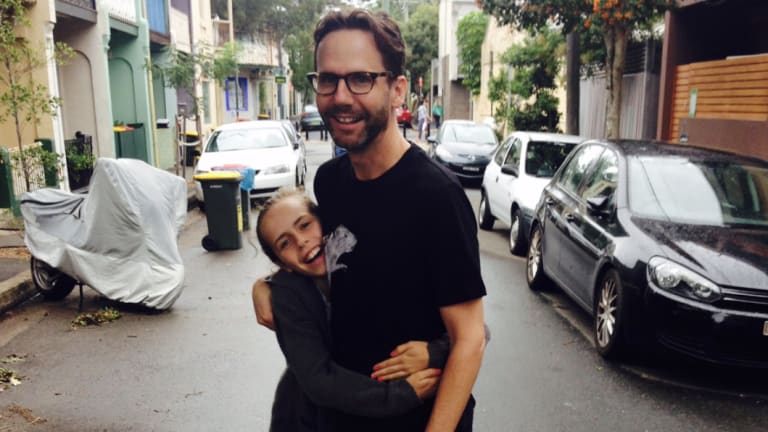 Robbie Buck and his daughter Sophia.

"When she was little, Sophia was very much a mummy's girl. It was lovely, but I always felt like I came second, and that was a bit hard to come to terms with. I have spoken to other dads and it's not unusual for kids to have a favourite when they are young and for the bond with their dad to strengthen when they are older.

By the time she was five, Sophia started to take more notice of me and that was a really nice period of our relationship. It's hugely important to try to give her high self-esteem, but she intuitively has this great sense of self-respect and grit and fortitude.

She has always been very gutsy, as well as very thoughtful, and as a dad I try to encourage that and respect it. Each year she becomes a slightly different person and that amazes me because she is always changing in a great direction.

I do most of the cooking and Ann and I share the housework, so those traditional gender roles are switched around. Sophia goes to a progressive school and is aware of gender politics.

I keep waiting for her to become this foreign alien in my house and really difficult, but I can't thank my lucky stars enough that she has maintained that strong connection with all of us. There are a few eye rolls and a bit of door slamming, but we have a rule that we eat dinner together during the week.

We've talked about the #MeToo movement and about how most blokes are great, but some can be dodgy. At the heart of it is a conversation about respect. And if someone is not respecting you, or your body, in any way, shape or form, then that's a real problem and you don't have to put up with it.

It's a relief that she has that nous, and a good sense of how wonderful she is, and she doesn't have to put up with people behaving badly to her. I've taught her that it's not her problem, it's theirs. You don't want to think your daughter could go into an industry, do her best and be exploited, so to have a movement where that behaviour is being talked about, well, that is a relief for a dad."

This article appears in Sunday Life magazine within the Sun-Herald and the Sunday Age on sale September 2.