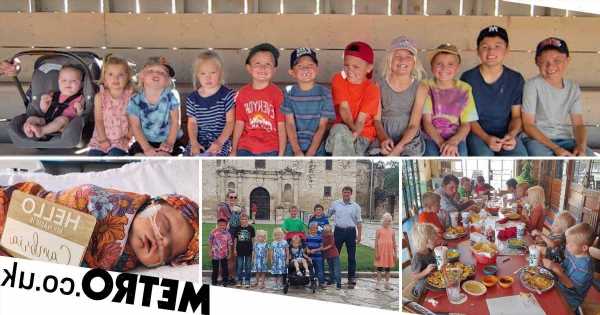 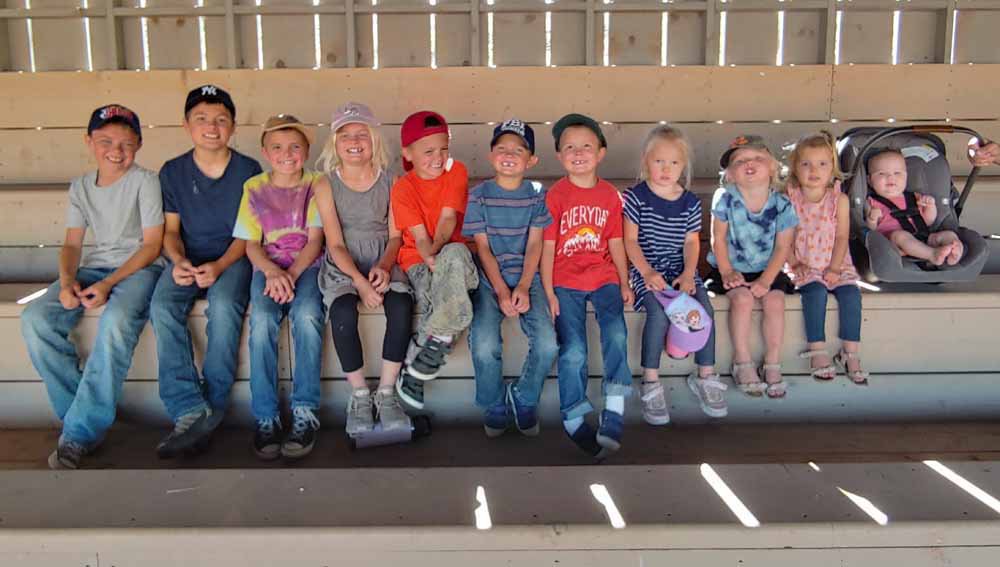 This family are being compared to the Bakers from Cheaper by the Dozen, after welcoming their 12th child in as many years.

In the 12 years since having their first, the longest the mum had gone without being pregnant had been seven months.

The stay-at-home mum, who lives with Chris and their ‘perfect family’ of six boys and six girls on a 12-acre farm with 140 animals in Santa Fe, New Mexico, USA, said: ‘It does feel special.

‘It is amazing how it worked out too because we had all our boys at the beginning and the last five have been girls, so it all evened out.’

The couple, who will not be planning any more pregnancies, say they never set-out to have a massive family when they tied the knot in 2008.

A miscarriage soon after, when she was 24 and Chris was 21, left them fearing they might not be blessed with any children at all.

However, after they had first child Clint in 2010, the babies kept coming and, once they hit 10, they decided to push to a dozen – with their older children’s backing – as they were all keen to take the crown as the real-life Cheaper by the Dozen clan.

Courtney said: ‘Clint was born three weeks before I turned 26 but, back then, I had no clue that I would have more children.

‘I thought I was too old at 26 and I didn’t know they would come so fast, plus include a set of twins. Then we said we would have 10 children maximum, but I still felt young and healthy enough, so we pushed it to 12.’

Pleased as punch with their 12-strong brood, Courtney says she and Chris will be doing some family planning from now on, saying: ‘We have ended up with six girls and six boys, so I don’t think we will have any more, unless we get a surprise.’

Given how much of the last decade she has spent pregnant, Courtney says it’ll feel ‘strange’ not carrying another baby.

She’ll still have her hands full for a while with the younger children, but the experienced matriarch has got her routine perfected, and is able to change multiple nappies at ones.

And an extra positive about a year without pregnancies on the horizon is that Courtney and Chris, who drive their family around in a 15 passenger van, should at last have time for some home improvements.

With just four bedrooms at the moment, they plan to extend their house to create three more, so they can have two children per room, with a room for themselves. They’ll also be enlarging their living room to fit everyone in comfortably.

Courtney, who last had a night out with Chris on Valentines Day, when they got a friend to babysit, said: ‘We are trying to get everyone situated properly at home.

‘We used to worry about the boys, then all these girls came along, so we made more room for the girls. Luckily, they all like to “pal up”.’

Not only does supermum Courtney look after the smooth running of the household, she also home schools her brood, while Chris works with the church, on the farm, and on the home improvements.

Each day starts with breakfast of cereal or oatmeal at 8am, followed by classes then lunch. The kids all chip in helping with animal chores, before more classes and a batch-cooked dinner at 5pm.

Once the kids head to bed at 8.30pm – to either sleep or quietly entertain themselves – the couple have their only free time of the day to wind down together in the evenings.

Although she loves her busy life, Courtney does say it can be difficult.

‘I do find it hard sometimes, as most people think we are crazy for having so many,’ she says. ‘But I have several friends on the internet with big families.’

Mum Courtney has no set plans for which life paths her little ones will take, saying they prefer to ‘see what happens’.

For now, her priority is making sure Cambria starts eating more and is welcomed into the family.

Just a week on from the tot’s birth, she said: ‘It will probably hit me later that she is baby number 12. Kids normally make you feel young, but the closer to 40 I get, I do feel a bit older.

‘I am content right now, but I am sure I will miss the baby stage, although I think Chris might have something to say if I get broody again.’