My daughter sits on our old brown couch under the window, headphones on. Maybe she's nine or 10. She doesn't know I'm there, watching and listening from the next room. And she's singing, quiet but oblivious.

Then she stops. The screen freezes on the final frame. For 16 seconds, I've had the sweet, small sound of her voice. 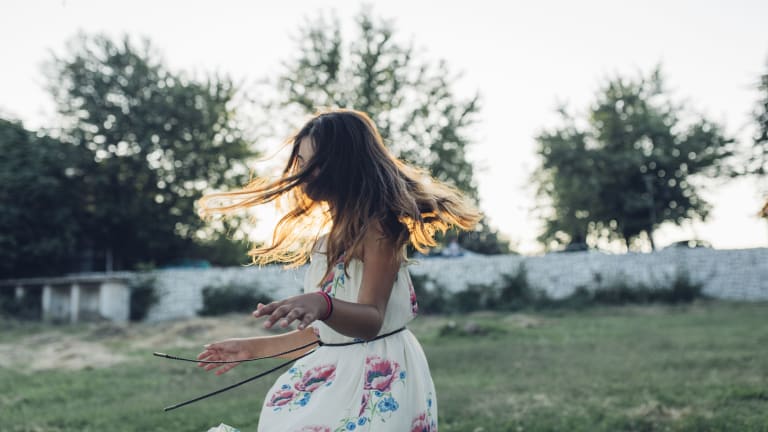 When the author’s girls were young, she says, ‘People told me to put down my camera, to be in the moment. So I did.’

In a different video, my other daughter is doing a "bum dance" inspired by a reality-TV star of the time. At the end, she collapses into laughter. It's almost the same laugh she has now but not; it's younger, and further away.

When my children were small, there were two pieces of advice I heard more than any other: "enjoy it while it lasts" and "it will go so fast". People told me to put down my camera, to be in the moment. So I did. I pushed them on swings. I caught them at the bottom of slides. I lay awake to listen to their breathing.

I looked at my daughters and tried to take snapshots of them. Each time they got older I filed my memory away with the others, enjoying it while it lasted, knowing it would go so fast. I remember watching my girl playing with a hose in my parents' garden and thinking, here's how I'll remember her when she was five.

I thought the years would flash by. That my children would grow up so quickly I wouldn't remember each version of them.

In total, I have about 10 minutes of footage from when my children were little. They were born before smartphones and Dropbox, so recording them meant pulling out the camera, recharging the eternally flat battery, finding the cable to transfer everything to the computer. Then a laptop would be upgraded or a memory card misplaced and, inevitably, some of the footage would be lost.

A few weeks ago, I found a wee treasure trove of this lost video. I must have transferred it to my first cloud storage, and when I set up a new service, a handful of old files synced automatically. The video of my daughter singing was one of them. I was like Indiana Jones staring down the holy chalice. I watched it on repeat for an hour

She was different from the snapshot I had taken. I'd forgotten the way her weird skinny elbows flicked inside-out, and the way she tapped her little foot, and the hesitation in her voice. The jigsaw of my memory hadn't retained all that detail.

There are others: a local news "broadcast"; singing the Geelong Cats club song; pondering the meaning of life while pumped full of cough medicine. Strung together, they add a couple of extra minutes to my minuscule collection.

Each time one of these videos ends, I want to throw my computer. I want to shout at it, THEN what happened? What did they say next? What did it sound like? Were they happy? Were we laughing? Was I enjoying it while it lasted?

Knowing what I know now, as a parent of teenagers, I wonder if I would have strapped on a GoPro and followed them everywhere, had it been an option. I wonder if I'd feel better if I had recorded every moment of the often difficult days. Should I have filmed them terrorising other kids at playgroup? All three of us crying on the kitchen floor? The deep, dark nights that seemed eternal?

After I found the missing footage, I tweeted about it. I said, I wish I hadn't listened to the people who told me to put the camera down. I would give anything for a few extra minutes of their little faces.

But it's not completely true. I wouldn't have traded the time itself.

Even now, with the older one turning 15(!), I go on believing that I'll remember her the way she is at this moment. I record some video if something seems important, but rarely just as a keepsake. I know I'll play it in five years and think, I wish I had more. Just one more minute.

But maybe that's the joy of it. Returning to the past in 16-second grabs and finding a tiny bit to carry around with you. Seeing the people they actually were, not exactly as you remember, then filling in the gaps with all that time you spent making the most of it. The bits you can't record: the way their skin smelled, milk-drunk; the way their short breaths moved under your palm; the way their fingers wrapped around yours.

Parts of my daughters are there in those seconds on my screen. But not all of them.