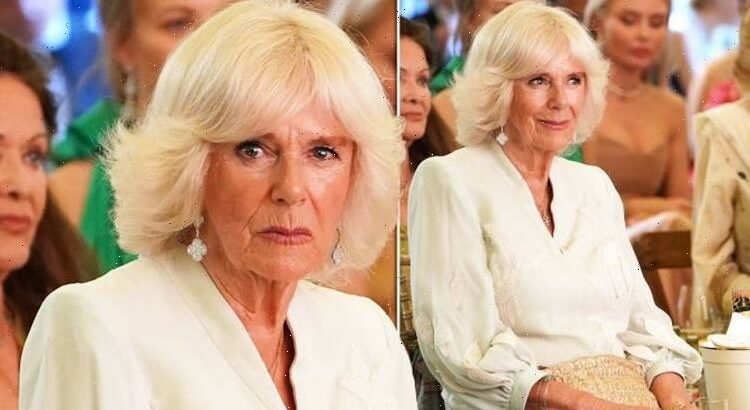 A body language expert claimed Camilla seems set to define herself as a “partner and support to her husband first and foremost rather than as a royal star in her own right.”

The campaign #CoExistence set up an environmental art exhibition that displayed over 100 elephant sculptures in London’s royal parks to support the notion of coexisting with nature.

Prince Charles and Duchess Camilla are joint presidents of the Elephant Family, which hosted the event in Lancaster House last night.

She claimed Camilla never truly embraces herself as a charismatic solo figure.
Instead, she often relies on Prince Charles for support.

Judi said, “Even after years in the spotlight there is still a suggestion of reluctance and anxiety in her non-verbal signals.

“Standing with Charles and mirroring his signals as they hunch slightly in towards one another to signal a sense of mutual comfort, she looks more assured than she does appearing by herself.

“Camilla often seems to prefer to deflect attention back onto him where possible.”

Camilla spoke at the event as Joint-President of the Elephant Family, which was founded by her late brother Mark Shand.

“Over the past few weeks, Londoners have had the rare opportunity to see some of that wildlife (albeit in static form) on the Mall, in Green Park, in St James’s Park and in Berkeley Square.

“These magnificent, life-sized elephants have roamed – with a little help – from the Nilgiri Hills of Southern India to the Cotswolds, to the heart of the city to raise awareness of the vital importance of healthy co-existence between humans and animals.

“They are a timely reminder to us all to live well with Nature, wherever we may be.”

Later on in the evening, Their Royal Highnesses viewed an outdoor screening of ‘The Year Earth Changed’, narrated by Sir David Attenborough.

At this point, Judi James commented, “Sitting in the audience we can see Charles sitting in a pose of more active participation with his programme on his lap.

“However, Camilla slumps back in her seat in a natural but non-regal-looking pose with her programme and her bag high on her lap.

“She appears to be leaning on her body in what looks like a self-comfort or barrier gesture, hinting at a subliminal desire to hide.

“She smiles as she watches the action on stage which looks like her signature warm, tempered beam but as she looks away and the smile drops we do seem to get a hint of a slightly more wary look.

“This might hint at the pressure Camilla still feels under, given her controversial past, even after all these years as a generally popular royal.”

Clarence House shared pictures from ‘A Starry Night in the Nilgiri Hills’ on social media.

The caption reads, “This evening, The Prince and The Duchess attended ‘A Starry Night in the Nilgiri Hills’ – an event hosted by @elephantfamily, in partnership with @thebritishasiantrust, to mark the finale of the @coexistence.story campaign.”

The Duchess of Cornwall also posted an audio clip of her reading ‘Travels on my Elephant’ by her late brother Mark on her Instagram page @duchessofcornwallsreadingroom.

This event came after a week spent in Wales with Prince Charles, where her body language was described as ‘incredibly tactful’ as she let Charles ‘take spotlight’.

Next week Charles and Camilla will visit Cornwall and body language experts will be analysing how they interact with each other and the people they meet.