There are a lot of reasons why the upcoming movie Crazy Rich Asians is worth talking about. The fact that it’s the first feature film in 25 years to feature a predominantly Asian cast being high on the list. But, the film’s star Constance Wu pointed out that Crazy Rich Asians’ representation is way deeper than it’s getting credit for, according to her comments at CinemaCon published by Vulture on Wednesday, April 25. When talking about Crazy Rich Asians, which will be released in theaters August 17, the conversation shouldn’t just be about diversity, but representation. Specifically, how this one movie focuses on so many different Asian experiences.

In the rom-com based on Kevin Kwan’s 2013 novel, Wu plays Rachel, a Chinese-American professor who travels to Singapore with her boyfriend, Nick, to meet his family, who, like the title suggests, are incredibly rich. Rachel struggles to be accepted by Nick’s family because they come from different worlds. Those differences are important to understanding these characters that may share a heritage, but don’t share the same experiences.

At CinemaCon in Las Vegas on Tuesday, Wu talked about why this is important. “You hear the words representation and diversity," she said, according to Vulture. "A lot of times they think putting in a face of color and filling a quota. Our culture is more than skin deep.”

It’s an crucial point as Hollywood tries to incorporate more diversity, but not just try to fill quotas; the industry needs to create thoughtful, complex, and nuanced stories starring people of color. Not to mention, Hollywood should aim to tell diverse stories of all different kinds of genres. “When you talk about representation, it can seem really serious," Wu said at CinemaCon, "but our film is really fun.”

It’s why some have asked whether Crazy Rich Asians will be a "gamechanger for representation" and Wu thinks it could be. “What I think is so special about this film," she said, according to Vulture, "it differentiates the Asian experience from the Asian American experience.” That might not seem like a big deal, but when talking about the journey of turning his book into a movie, Kwan told Entertainment Weekly that a producer reportedly wanted to whitewash Wu’s character to better highlight the cultural differences of Rachel and Nick.

"That was their strategy," he told EW. ‘They wanted to change the heroine into a white girl. I was like, ‘Well, you’ve missed the point completely.’ I said, ‘No, thank you.’” The point of the book and now the movie isn’t to simply highlight the differences between two families, it’s to understand how a culture changes through the Asian immigrant experience.

It’s an experience not many movies get to delve into since so few films star Asian actors. The last one to feature a predominately Asian cast was The Joy Luck Club in 1993, a drama that focused on the immigrant experience by spanning generations and continents. 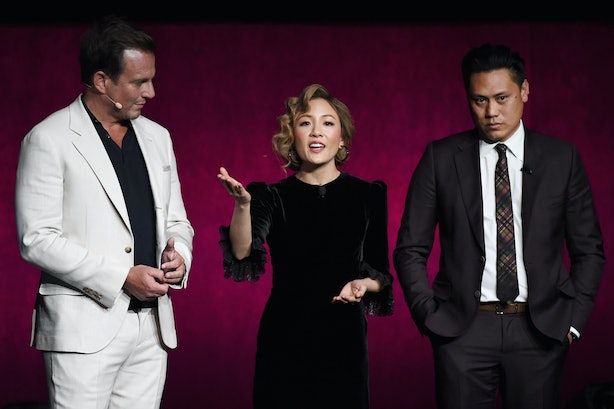 Being able to tell those kinds of generational stories is why Wu wanted to play Jessica Huang, the Chinese-American mom, on Fresh Off The Boat. “It changed me,” Ms. Wu told the New York Times in 2016, when speaking about her role in the series about an Asian-American family. Especially, since it had been 20 years since a TV series has featured a predominately Asian family.

Wu told the New York Times that when taking the job she thought more about paying her bills, but shortly after being cast, she shifted her focus “from self-interest to Asian-American interests.” It wasn’t just about people seeing her, an Asian-American women, onscreen, it was about seeing her tell a story about what it means to be an Asian in America.