International Women’s Day 2021: Topless protesters let off purple smoke cannons in France, while a demonstrator brands a ‘don’t stop us’ sign in Japan as countries unite in calls against gender discrimination and sexual violence

People from across the globe have taken to social media to reveal how they’re marking International Women’s Day – including Palestinians taking part in a walk across Gaza city, flash mobs in Russia and protests for equal rights in France.

International Women’s Day, which takes place on 8 March, celebrates women’s achievements in social, economical, cultural and political fields and is also an invitation for all elements of society to accelerate gender equality.

This year’s theme is ‘Choose to Challenge’ – with thousands taking to social media to share a snap with one hand in the air alongside a detailed caption explaining the bias and inequalities they’re championing.

Elsewhere, the hashtag has given people a platform to share the protests taking place around the world – including two topless protesters kissing and letting off purple smoke canons in the streets of Lyon, France as they join those calling for equal rights and feminicides.

In another snap, activists of the Non una di Meno (Not One Less) stand in front of the Ministry of Economy in Rome, Italy with pink umbrellas and messages pinned to their fronts as they protest against male violence against women. 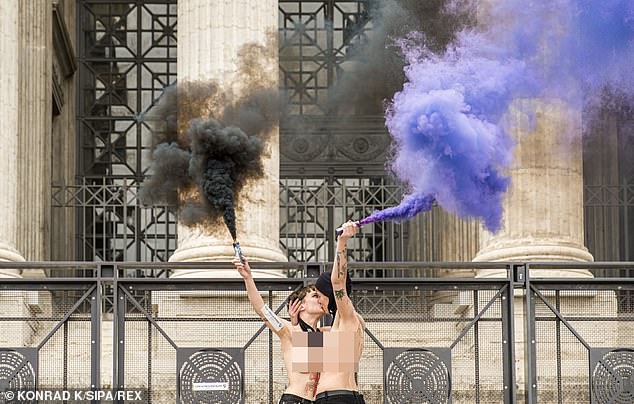 Several thousand people wearing the colour purple demonstrated in the streets of Lyon following the call of the Women’s Rights Collective in France. Through this march, protesters were calling for equal rights and protesting against sexual violence against women, sexist crimes and feminicides. 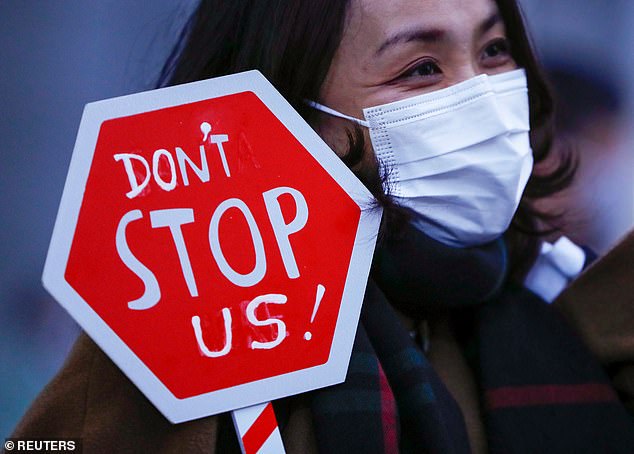 A demonstrator takes part in a march to call for gender equality and protest against gender discrimination, marking the International Women’s Day in Tokyo, Japan 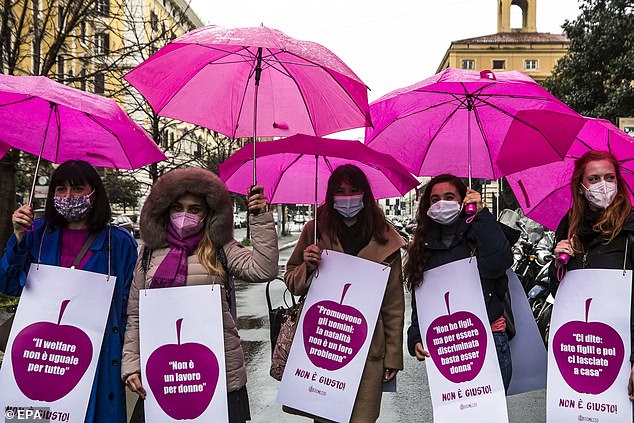 Activists of the Non una di Meno (Not One Less) protesting against male violence against women and violence in general movement demonstrate against structural violence and for economic independence in front of the Ministry of Economy on the occasion of International Women’s Day, in Rome, Italy 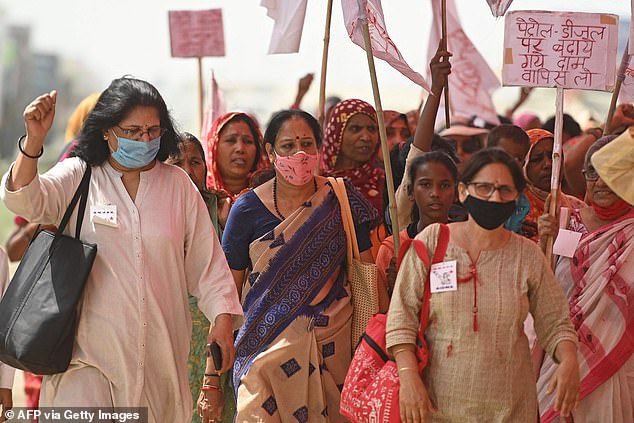 Another snap shows a demonstrator from Tokyo, Japan, holding a stop sign which reads: ‘Don’t stop us’ as she takes part in a march to call for gender equality and protest against gender discrimination.

Elsewhere, women farmers crowd together to protest against farm laws at Bahadurgar near Haryana-Delhi border, India, while Mamata Banerjee, the Chief Minister of West Bengal, can be seen waving as she and her party supporters attend a protest march against the rise in fuel prices.

International Women’s Fay was marked in Russia with the military staging flash mobs all around the country.

In the UK, virtual panels have been organised to celebrate women who have campaigned for positive change, while 20 female traffic signals are seen being installed across the capital – including high streets in Clapham, Brixton and Lewisham, at Hyde Park Corner and outside King’s Cross St Pancras Tube station. 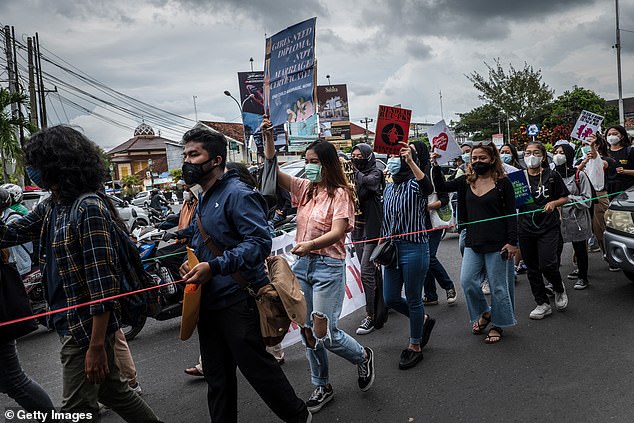 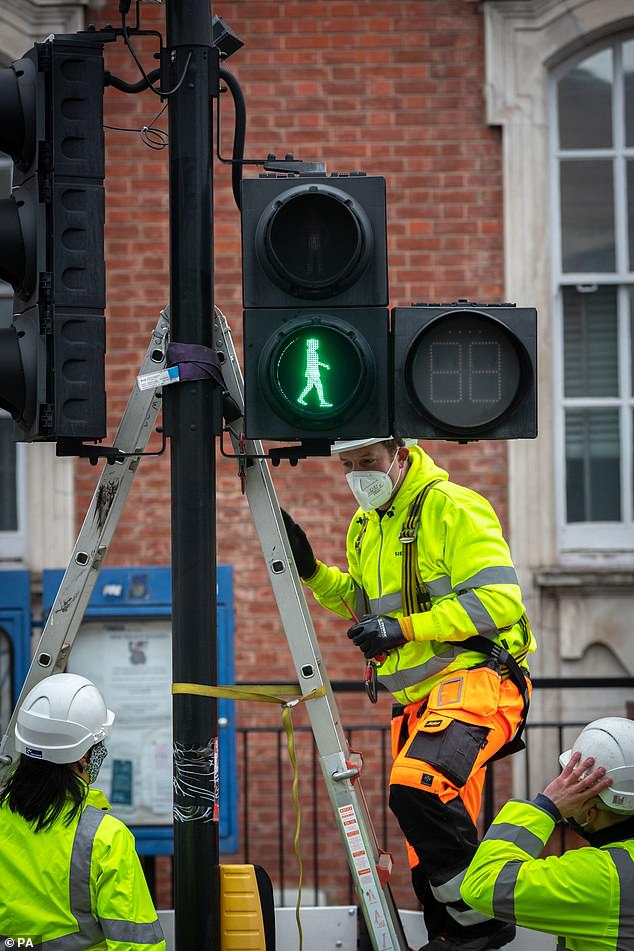 One of 20 female traffic signals being installed across the capital, in Bow, east London. The change was made on International Women’s Day at 20 locations in the capital, such as high streets in Clapham, Brixton and Lewisham, at Hyde Park Corner and outside King’s Cross St Pancras Tube station 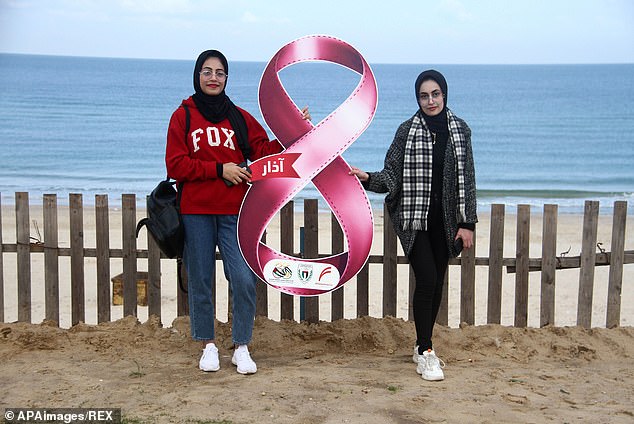 Palestinians take part in a walking sport on International Women’s Day, in Gaza city on March 8, 2021 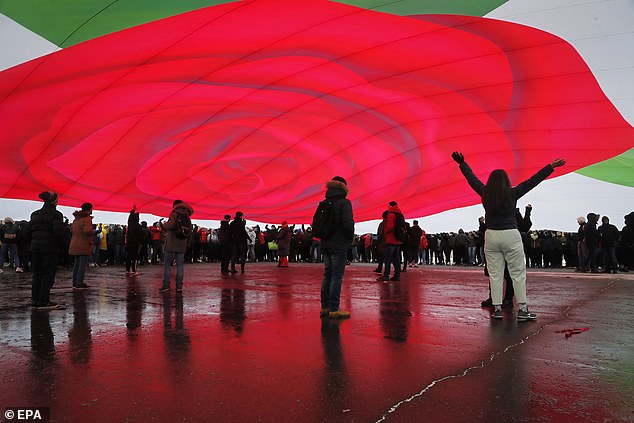 Young people take part in a flashmob on the occasion of International Women’s Day as it is celebraed in Moscow, Russia 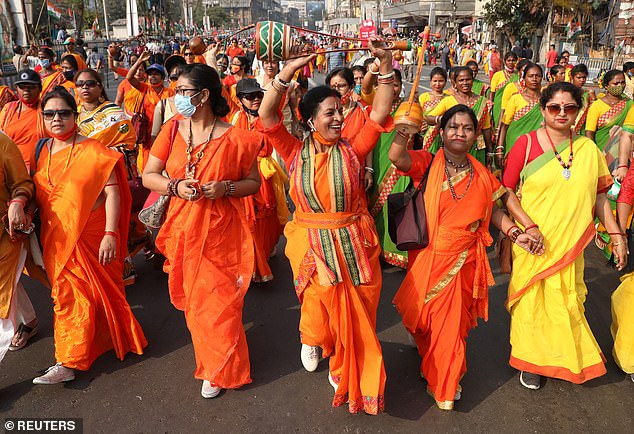 Women attend a protest march against the rise in fuel prices on the occasion of International Women’s Day in Kolkata, India

It comes after people started marking the occasion 24 hours early yesterday – with some spotted in China and Russia arranging flowers, and women in Israel laying in mock coffins to represent those who’ve been killed as a result of domestic violence.

International Women’s Day has taken place since the early 1900s – with over 15,000 women campaigning in New York for shorter hours, better pay and voting right in 1908.

It has continuously risen in significance since Clara Zetkin suggested that it should become a global movement during a conference of Working Women in Copenhagen in 1910.

The International Women’s Day website is calling for people to continue campaigning for gender equality and celebrate the achievements of women. Speaking about this year’s theme, organisers wrote: ‘A challenged world is an alert world. Individually, we’re all responsible for our own thoughts and actions – all day, every day.

‘Collectively, we can all help create an inclusive world. From challenge comes change, so let’s all choose to challenge.’ 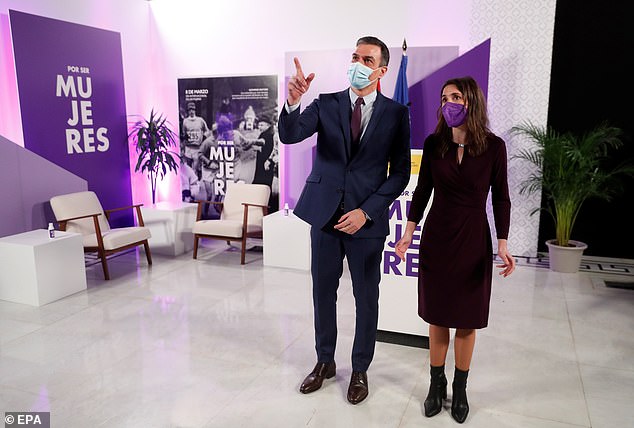 Spanish Prime Minister, Pedro Sanchez (left), stands next to Minister for Equality, Irene Montero (right), as he arrives to the Ministry’s headquarters in Madrid, Spain 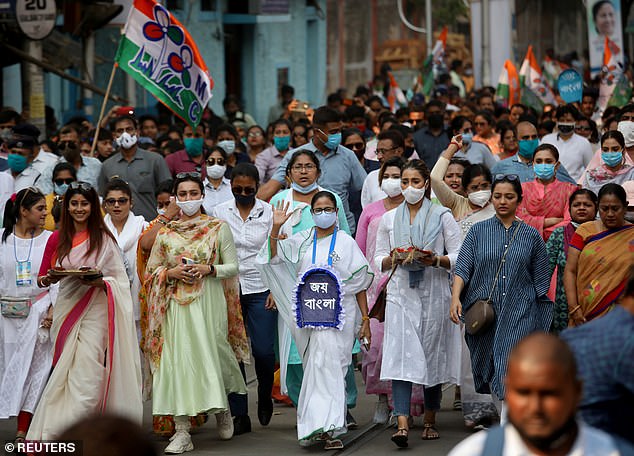 Mamata Banerjee, the Chief Minister of West Bengal, waves as she and her party supporters attend a protest march against the rise in fuel prices 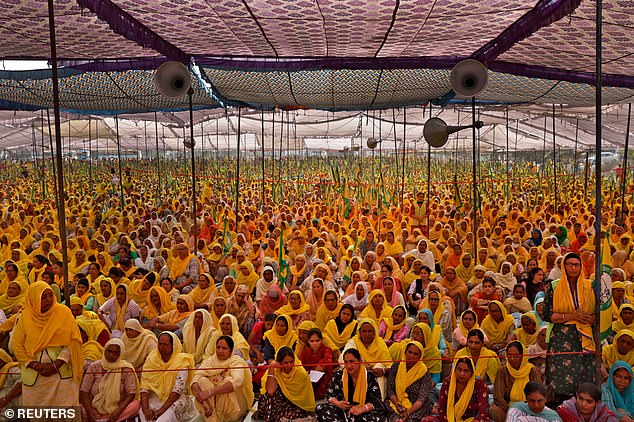 Women farmers attend a protest against farm laws on the occasion of International Women’s Day at Bahadurgar near Haryana-Delhi border, India 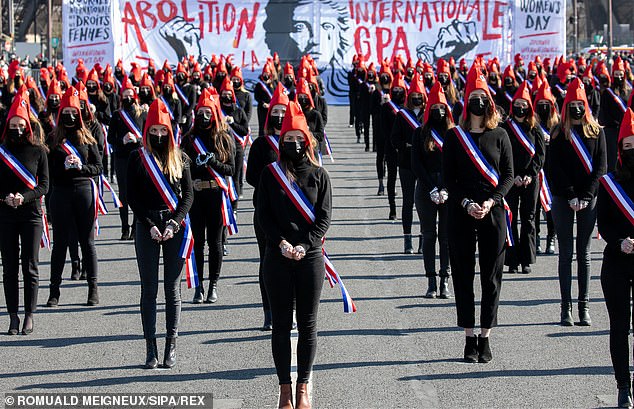 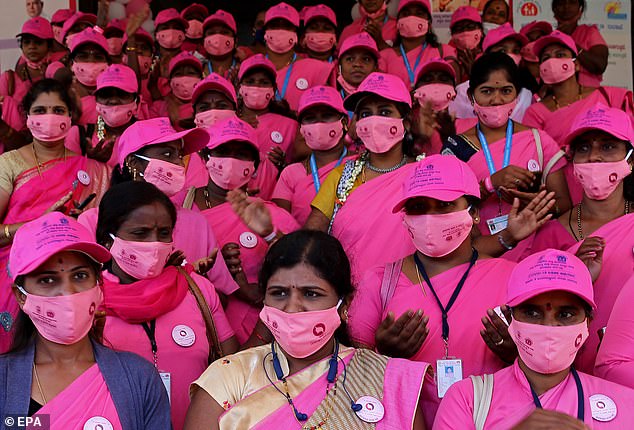 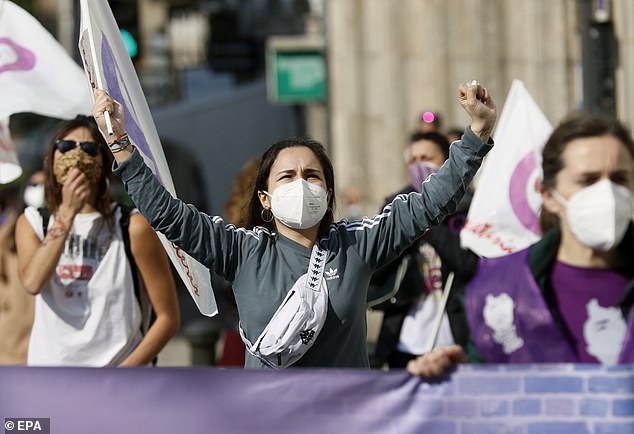 A woman raises her arms as she takes part in a rally to mark the International Women’s Day in the city of Santiago de Compostela, northwestern Spain 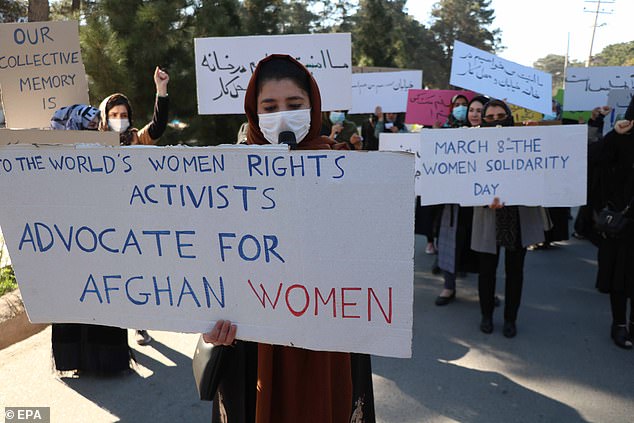