Forthcoming episodes of Ricky Gervais' Netflix series After Life will feature a celebrated Indigenous artwork after an unauthorised copy was used in the first season.

The British comedian and his production company, Derek Productions, came under fire earlier this year after it was discovered a dot painting hanging in the living room of the show's protagonist was not produced by an Indigenous artist. The makers of the hit show have now agreed to compensate one of central Australia's most well-known Aboriginal artists and licence his work moving forward. 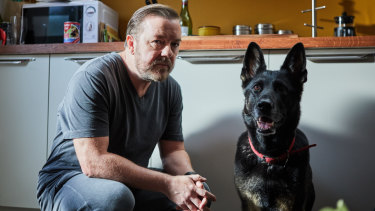 Ricky Gervais in a scene from his Netflix series After Life.

An investigation by the Copyright Agency and its UK counterpart found the painting from After Life's first season bore a striking resemblance to Aboriginal artist Warlimpirrnga Tjapaltjarri's 1987 work Tingarri Dreaming. However, the prop was painted by a British woman a decade after the original.

The artist in question, Timna Woollard, apologised when the prop's origins made headlines back in March. The British artist has said she was not as educated on the sensitivities around Indigenous art in the 1990s and would never make such a painting again.

Indigenous art predates colonisation by tens of thousands of years and can be used to transmit sacred customs and law. In some instances, only men or women may depict certain knowledge (known as "men's business" or "women's business"). There are also issues to do with fake artworks and exploitative art dealers. 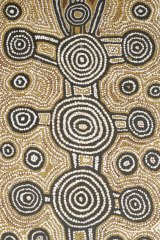 Adam Suckling, the chief executive of the Copyright Agency, said the upcoming second season of After Life would now feature an authorised print of Tingarri Dreaming. The painting is currently part of the National Gallery of Victoria's collection.

Derek Productions has been contacted for comment. The second season of After Life is currently in post-production and due on Netflix sometime in 2020.

Paul Sweeney of Papunya Tula Artists, who represents Mr Tjapaltjarri, said in a statement he was pleased with the outcome.

"It's important that [Mr Tjapaltjarri's] work and the work of all Australian Aboriginal and Torres Strait Islander artists is acknowledged and respected," he said.