The moment that Riverdale fans have been waiting all season for finally arrived at the end of this week’s new episode. Spoiler alert: This post contains plot details from Riverdale Season 3 Episode 16, "Big Fun." After the gang sang their final note in Heathers: The Musical, a strange man stood up in the audience and was the first to applaud. As if you couldn’t immediately tell from the white clothing and the Chad Michael Murray face, Evelyn exclaims she she knew her dad would love the musical. That’s right — Riverdale finally introduced Edgar Evernever, so things are about to get real.

Although he had not appeared on Riverdale until the very end of Wednesday night’s musical episode, Edgar Evernever has been a huge part of Season 3 already. He has been mentioned several times as the leader of The Farm, and is also a prime suspect to be the Gargoyle King among the fandom. Now that he is finally showing his face more than halfway through the season, it is a clear sign that we are actually going to start getting some real answers about what the hell is going on at The Farm and what is up with the Gargoyle King, and Gryphons and Gargoyles, and the seizures, and the millions of other mysteries that do not seem to make any sense yet.

For being such a pivotal character without even appearing on the show, Edgar Evernever’s grand entrance obviously had to be something monumental, and Riverdale definitely gave him one of the creepiest introductions ever. At the very end of Riverdale High’s production of Heathers: The Musical, Edgar stood up among the eerily silent audience and began a menacing slow clap. Then several other Farm members dressed in white also stood up and joined in his slow, rhythmic clapping, as if under his control. Betty is clearly super creeped out, but Evelyn is overjoyed, remarking that she knew her dad would enjoy the show. 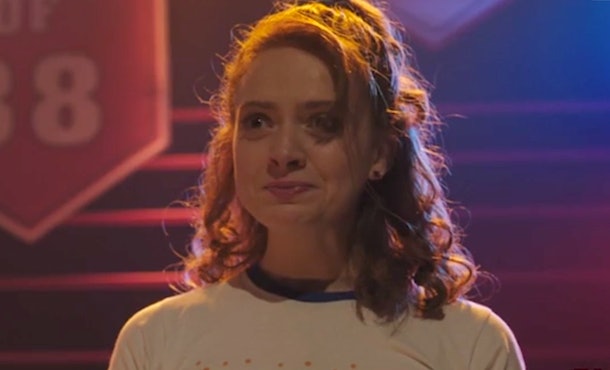 The moment shows just how powerful Edgar Evernever must be, and Betty had already learned that The Farm was rapidly growing earlier in the episode. After she suspected Evelyn of using Heathers: The Musical rehearsals to try to induct new members into The Farm, Betty spied on Evelyn and found Fangs joining the cult in a strange initiation ceremony (that actually kind of looked like a wedding to Kevin). And when Betty tried to show Principal Weatherbee photos of this strange ceremony, Weatherbee revealed that he had actually read Edgar’s doctrines and found them appealing. Weatherbee’s involvement in The Farm is confirmed at the end of the episode when he stands up and claps along with Edgar.

We still have not heard Edgar Evernever speak, but it looks like that is definitely going to change in just a matter of days. Next week’s new episode is entitled "The Master," a reference to the Philip Seymour Hoffman cult leader movie of the same name, so it is safe to assume that Edgar will be the primary focus of the next episode. We will learn much more about Edgar Evernever when Riverdale‘s next episode "The Master" airs on Wednesday, March 27.