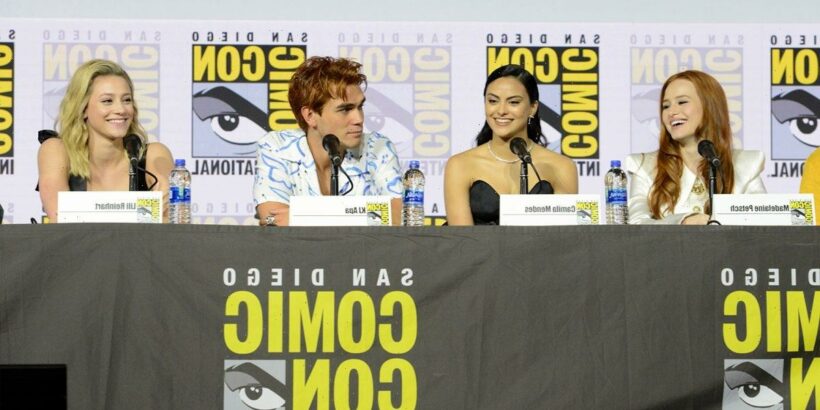 Riverdale fans will have to mark a new night in their calendars during season 6. On Nov. 5, the CW announced the midseason schedule for all shows, with dates starting in December. Most series will remain on the same schedule for early 2022, but two will air on new nights: The Flash and Riverdale. Both comic book shows have special premiere events on their current schedule for the month of November before making the change. Here’s when to tune in to Riverdale Season 6, so you never have to miss an episode.

[Spoiler alert: The following story contains some spoilers for the Riverdale Season 5 finale.]

The Archie Comics adaptation will kick off season 6 with a five-part premiere event known as “Rivervale,” with the first episode set to air on Tuesday, Nov. 16 at 9 p.m. As Decider reported, the town of Riverdale will see some dark changes in the new season following the catastrophic event in the season 5 finale. The synopsis reads:

WELCOME TO RIVERVALE – Following the explosion that ended Season Five, a new day dawns in the town of RiverVALE, where everything is as it should be. Veronica (Camila Mendes) and Reggie (Charles Melton) are now the town’s power couple, while Jughead (Cole Sprouse) and Tabitha (Erinn Westbrook) move in together. But with Cheryl (Madelaine Petsch) demanding a return to the “old ways,” this serenity will surely not last. And how could Archie (KJ Apa) and Betty (Lili Reinhart) possibly have survived? Vanessa Morgan, Casey Cott, Drew Ray Tanner and Madchen Amick also star. The episode was written by Roberto Aguirre-Sacasa and directed by Gabriel Correa.

Most notably, the “Rivervale” event will feature a crossover many fans have wanted for years: The Chilling Adventures of Sabrina. Netflix’s dark take on Sabrina Spellman’s story ended in 2020, but the teenaged witch will finally visit Riverdale to help Cheryl make some magic. Check out the trailer for “Rivervale” below.

After Riverdale Season 6 Episode 5, the series will take a few months off before returning on its new night. According to the CW’s schedule (per TVLine), Riverdale will pick up with episode 6 on Sunday, March 6 at 8 p.m. Those who have watched the teen drama since the beginning may recall that Riverdale moves around the CW’s schedule quite a bit, having aired on most weeknights since season 1.

So, why the change from Tuesday to Sunday? In March, the CW will need to make room for its newest series, Naomi, based on Brian Michael Bendis and David F. Walker’s superhero comics of the same name. Naomi will premiere on Tuesday, Jan. 11 at 9 p.m. Before the new series, Superman & Lois fans can tune in to the season 2 premiere at 8 p.m.

Where to stream ‘Riverdale’

Those who can’t watch Riverdale Season 6 on its new night will be able to catch up the next day via the CW app. As for the rest of the series, the CW only houses its current season. However, those with a Netflix subscription can stream Riverdale Season 1-5 now.