The teens of Riverdale High School are ready to get their song and dance on once again. Last year, Riverdale aired its first musical episode as the characters staged a production of Carrie: The Musical, and now the show has revealed what this year’s big musical will be. Riverdale‘s Season 3 musical episode will be Heathers, so start brushing up on your croquet game.

For the upcoming musical episode, the Riverdale kids will once again be staging a school musical production. This time, they will be putting on Heathers: The Musical, the recent hit Off-Broadway and West End musical that is based on the iconic 1989 dark comedy film. Heathers‘ mix of campiness and humor with extremely dark issues like murder honestly feels like a perfect fit for Riverdale. Showrunner Roberto Aguirre-Sacasa teased how the musical episode will come to life in a statement to Entertainment Weekly:

Everyone is singing, eh? Could that mean Cole Sprouse will finally show off his vocal chops? As Riverdale fans know, Sprouse was the sole member of the show’s main cast to not sing in last year’s musical episode.

Well, if Jughead does get a song, it might not be on stage. Roberto Aguirre-Sacasa posted the cast list for which characters will be playing which Heathers roles, and Jughead’s name is not on the list. The note only lists him as security detail, not an actual part in the show. The message contains a lot of juicy details, as well! Check it out:

There’s a lot to go over in this image, but the first thing we have to address is Archie. At the end of Wednesday night’s midseason premiere (spoiler alert for if you have not watched it yet), it appeared that Archie had died. But, his name is clearly on the cast list to play the musical’s jock/bully Kurt Kelly. I guess fans can stop worrying about Archie potentially dying… at least for now.

Another big red flag is that the musical is being sponsored by The Farm, aka the weird cult that Betty saw floating babies over a fire somehow. The Farm has taken a back seat the the Gargoyle King mystery in recent episodes, but it looks like the show will be delving deeper into this strange cult soon enough.

The rest of the cast list is fairly straightforward. Josie will take on the lead role of Veronica Sawyer, and Sweat Pea definitely has the whole teen delinquent look down perfectly to portray J.D. And of course, the Heathers have to be our three leading ladies: Cheryl, Veronica, and Betty. Honestly, who else could possibly play Heather Chandler other than Cheryl Blossom? The CW even shared a first look at Cheryl playing Heather Chandler’s favorite game: croquet. 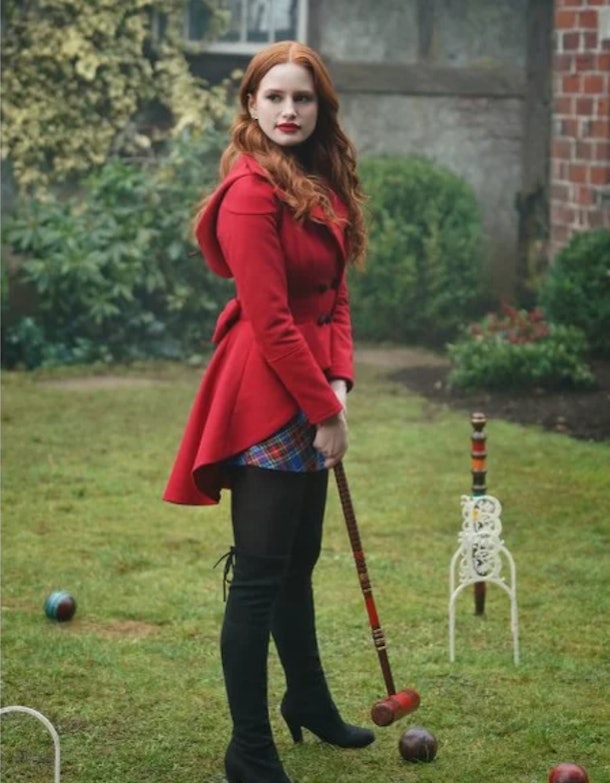 One strange thing does stand out in this cast list, though. A character we have not met yet named Peaches ‘N Cream is cast to play Kurt’s dad, Veronica’s dad, and Principal Gowan. Actress Bernadette Beck confirmed on Instagram that she had been cast as Peaches ‘N Cream, but it seems a bit strange that her character would be playing all the paternal roles. If they had decided to gender-swap the character, wouldn’t they be listed as Kurt’s mom and Veronica’s mom? Oh well, I guess we will see what happens with that.