This could be a kitchen in just about any community hall in Britain, judging by the range of dishes and the people preparing them with such obvious enthusiasm.

The one clue to its actual location is the immaculate young helper in the stripey apron. For this is the new Duchess of Sussex getting stuck in to her first public endeavour on her own – in London W10.

Behind these smiles, though, there is still very great pain. For what unites all the women here at the Hubb Community Kitchen is the fact that all their lives were turned upside down by the cataclysmic events at Grenfell Tower in June last year. 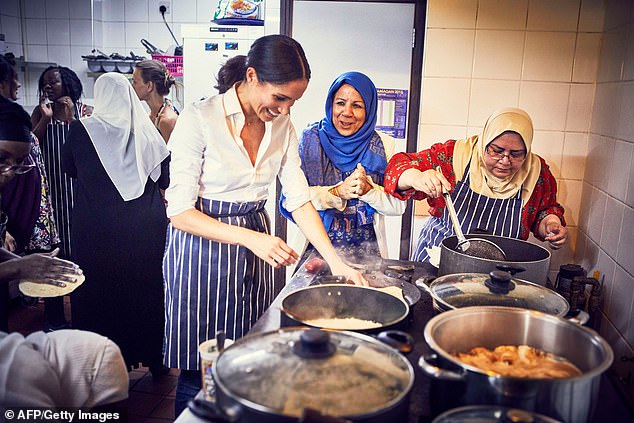 Getting a taste for charity work: Meghan with two of the organisers at the Hubb community Kitchen in West London

Having spent many days there myself reporting on the dreadful aftermath, what sticks in the mind is the sense of camaraderie and kinship that became so evident as the bereaved and their neighbours came together in grief.

The headlines might have focused on political outrage cranked up by those with axes to grind. But on the ground, in the ash-strewn streets, the overarching sense was of people wanting to unite and help.

Now, more than a year later, it is food which is continuing that process – with a little help from the duchess.

Yesterday, she told how she has been making secret visits to cook for Grenfell Tower victims. She recalled how in January she ‘made a quiet trip to Al-Manaar, a mosque close to the Grenfell community’.

Echoing secret charity visits made by Princess Diana, Meghan made a number of private trips to the centre to meet volunteers. 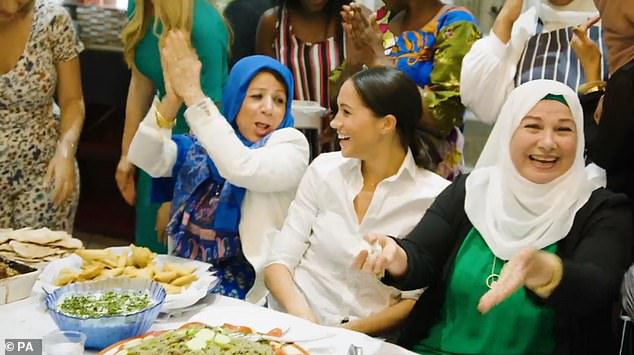 Joyful: She celebrates with the women, who include survivors of the Grenfell fire

In her first solo project as a royal, she ‘got stuck in straight away’ donning an apron at the community kitchen and helping create a charity cookbook.

Of her first visit, she said: ‘An apron was quickly wrapped around me, I pushed up my sleeves, and I found myself washing the rice for lunch.’

A group of local women started the Hubb Community Kitchen, using recipes passed down the generations, to cater for families made homeless and it soon grew to help others, too.

Now they have released a 50-recipe cookbook, Together, with the duchess writing in the foreword: ‘I immediately felt connected to this community kitchen; it is a place for women to laugh, grieve, cry and cook together.’

Volunteers at the centre included Munira Mahmud, 34, who started the kitchen project after the fire.

Munira was one of two of Meghan’s fellow cooks who made terrifying escapes from the inferno, in which 72 died.

She was able to flee along with several members of her family, while Hiwot Dagnachew, 42, was on the fifth floor and saved the lives of her niece and her niece’s children by telephoning them to warn them to get out. 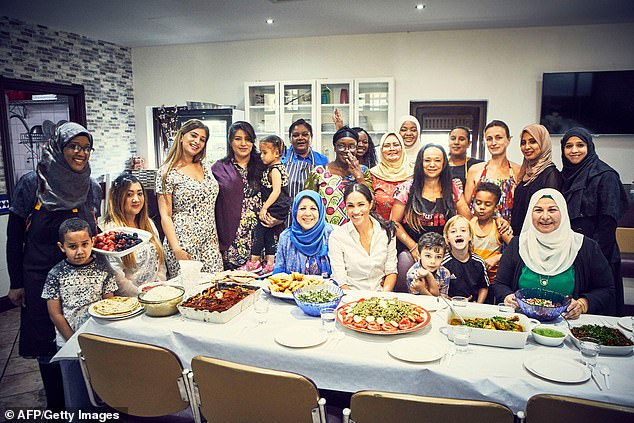 Ready to tuck in: The duchess with locals at the Hubb, which she has been visiting since January and where many recipes have been handed down the generations

Munira said: ‘Last summer, we were placed in a hotel and I had no kitchen to cook for my family. It was very emotional for me to get in the kitchen. The moment I started cooking I was in tears.’

Recalling the duchess’s first visit, she said: ‘She came into the kitchen, very relaxed, very friendly, down to earth. She wore an apron. I can’t believe I made her wash rice!’

Zahira Ghaswala, 39, the co-ordinator of the kitchen, said: ‘She just got stuck in straight away. It was just all natural – the joy, the happiness.

The environment just makes everyone feel you want to join in. She was loving – the recipes, the flavours that were put together. She has got stuck in with helping, preparing, serving, making chapatis.’

Meghan said of the women: ‘Their roles as matriarchs united them across their cultures; the kitchen provided an opportunity to cook what they knew and to taste the memory of home, albeit homes some had recently lost.’

Meghan’s trips to the Hubb, pictured right, echo the way Princess Diana visited many of the charities she supported, frequently without public fanfare.

In 1993, Diana, pictured left, played dinner lady to hungry children on a visit to a Red Cross feeding station in Mazerera, Zimbabwe. 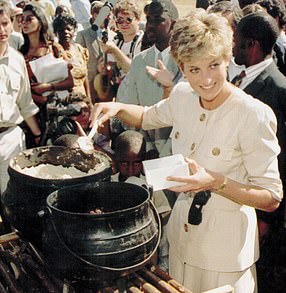 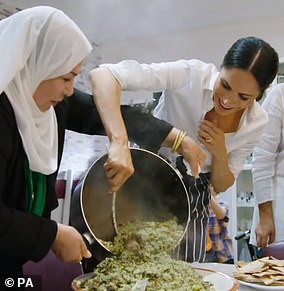 Describing the kitchen, where ‘scents of cardamom, curry and ginger dance through the air’, she wrote: ‘You will find yourself in a melting pot of cultures and personalities, who have roots in Uganda, Iraq, Morocco, India, Russia and at least ten other countries.

‘It will take you about 15 minutes to enter the room, as you will be joyfully greeted by kisses by each of the incredible women there.’ Photography for the recipes – which include aubergine masala, coconut chicken curry and caramelised plum upside-down cake – was done at a kitchen at Kensington Palace, where a courtier said: ‘The whole place smelled absolutely amazing.’

In choosing to make her first public solo project a community kitchen for women affected by the ghastly Grenfell fire, the duchess is already putting down a few markers on the way she plans to configure her public programmes: hands-on and informal, but professional too. 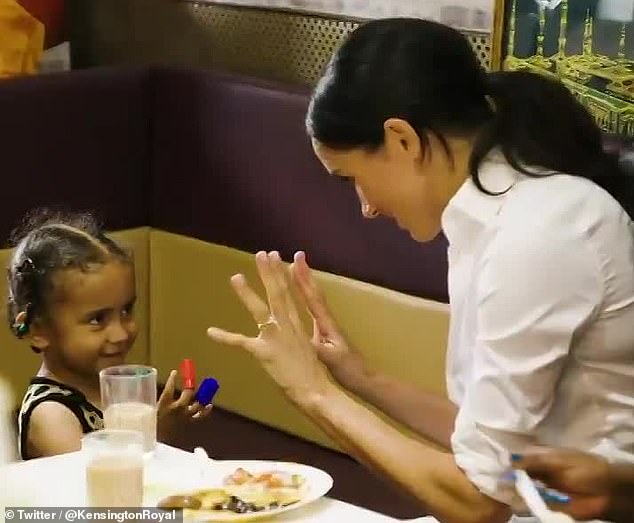 Making friends: Meghan with a little girl in the promotional video for the book

This was not a case of a long-standing charity with royal connections looking for a new patron.

The duchess talked to a number of projects but, I understand, developed a particular bond with this one as she could do something tangible to help – and also, in part, because she has a keen interest in food. It was, after all, while roasting a chicken that she became engaged to Prince Harry.

The women at the Hubb needed funds to extend their operation from two days a week to seven, and the duchess had the idea of a cookbook. She helped workers get administrative assistance and, crucially, a publisher, leaving the women to get on with doing what they do best: cooking.

However, the duchess’s involvement has not stopped there. On Thursday, she will help prepare the lunch the Hubb team will serve at Kensington Palace to launch their book.

Few can recall the last time a prince or princess was down in a palace kitchen, sleeves rolled up. In due course, many more traditional patronages will follow.

But many years hence, historians will record that the first cause espoused by the House of Windsor’s first American princess was a community kitchen underneath the A40.