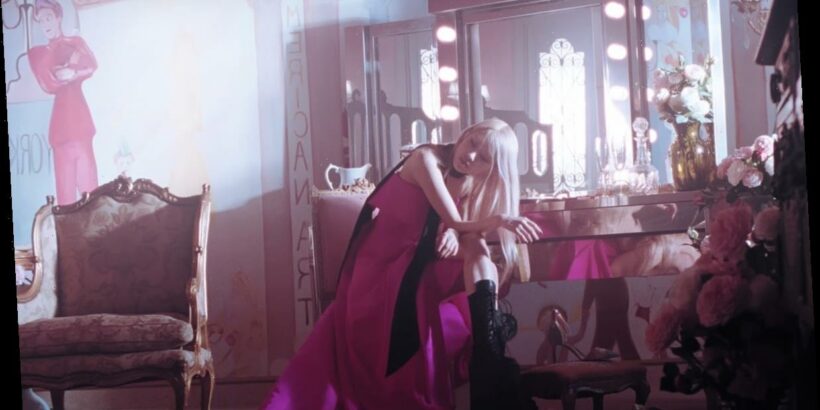 She’s already conquered the world as part of Blackpink, and now Rosé’s debut solo music video for “On The Ground” arrives like the thing featured in the very first shot: a meteorite. With production and co-writing credits from Amy Allen (who has worked with Halsey and Selena Gomez), Jon Bellion (whose previous credits include work with Miley Cyrus and Katy Perry), and K-pop veteran Teddy Park, the track has obvious worldwide appeal. Lyrically, it finds Rosé singing about reaching the heights of fame only to be brought back to earth after a breakup. Appropriately, the video features Rosé languishing alone in the backseats of cars, in bedrooms, and outside a movie theater. She’s left the high-impact dance routines for her day job in the girl group and instead lets her fashion sense shine in the clip.

The singer first appears in a fuchsia Alex Perry gown paired with black combat boots and, later, a Saint Laurent leather jacket. Throughout the video, she also struts in a white feathered top and miniskirt, plays the cool girl in purple faux fur and a RE/DONE “Adopt A Koala” t-shirt, and eventually floats above it all while wearing a voluminous pink ruffled minidress from Haleia.

With Blackpink’s massive fanbase behind her, the track, video, and the accompanying debut single album -R- are already well on their way to breaking records. Her record label YG claimed that earlier in the week -R- had received over 400,000 pre-orders, a record in Korea for a female solo artist. With over 23 million views on YouTube in less than 12 hours, it’s also on track to shatter a record for most first-day views for a female solo K-pop artist as well. As of this writing, the song has already hit #1 on iTune’s singles charts in America, and has done the same in countries including (but not limited to) France, Brazil, Canada, Mexico, Hong Kong, Hungary, and Bahrain.