Ready to steal the show! Royal Ascot revellers step out adorned with bold flowers, butterflies and pineapples as day two gets off to a colourful start

Royal Ascot is one of the highlights of the summer social calendar for royalty, racing fans and fashionistas who love a good day out.

And while Ladies Day at the Berkshire course doesn’t take place until Thursday, early arrivals today were certainly keen to keep the glamour stakes high.

Attendees put on a colourful display in dresses emblazoned with flowers, leaves and even a pineapple as they arrived for day two of the prestigious racing festival, which is a favourite with the royal family.

Today racegoers faced breathalyser tests and a team of sniffer dogs at the gate amid heightened security measures, and there is also a crackdown on beer sales and an increased stewarding presence.

Feeling fruity! A racegoer looked striking in a palm print dressed adorned with a large pineapple. Another was eye-catching in an orange and pink ensemble teamed with a feathered hat

A glamorous racegoer teamed her white dress with bold floral detail with a pair of matching heels (left). A woman put on a colourful display in a patterned purple maxi dress teamed with a fuchsia hat (centre). Selfie time! A pair of racing fans paused to capture a snap of their day out 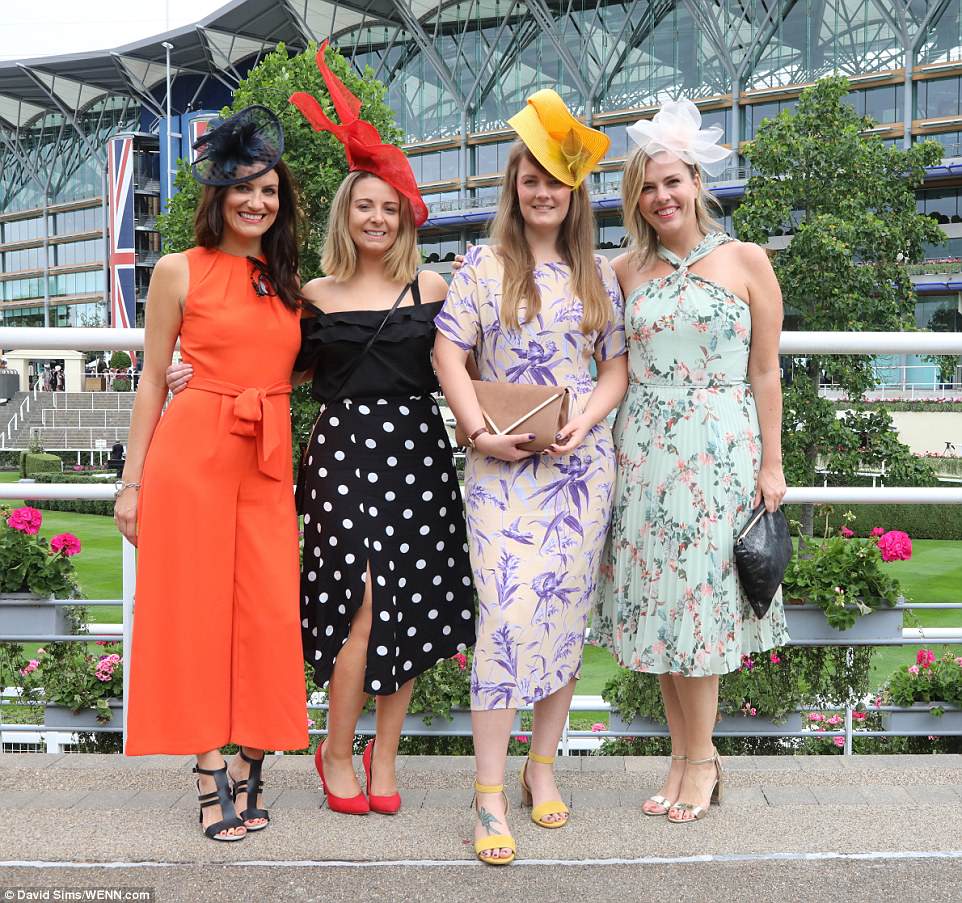 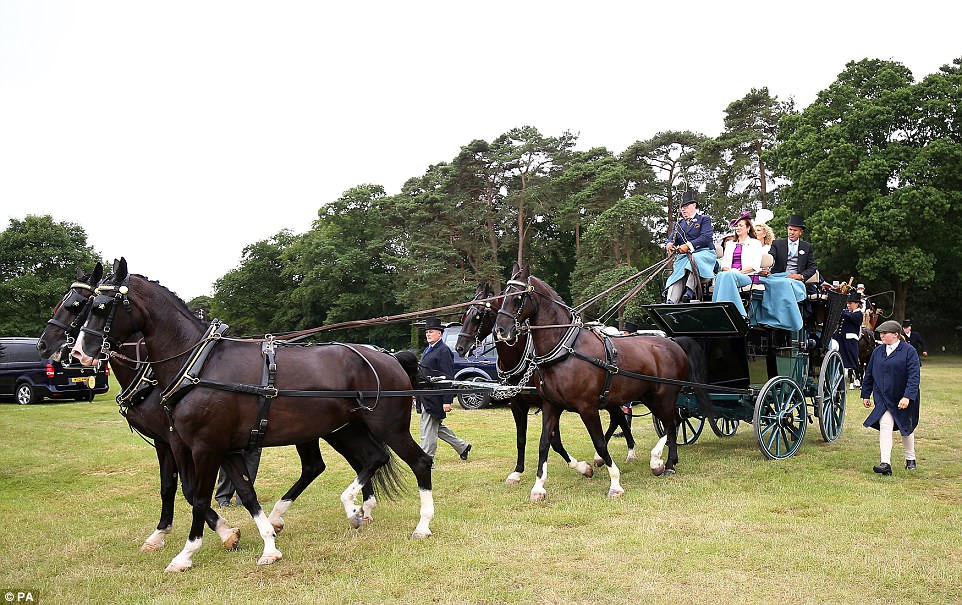 Arriving in style! Racegoers made a grand entrance as they travelled to the course in a horse drawn carriage 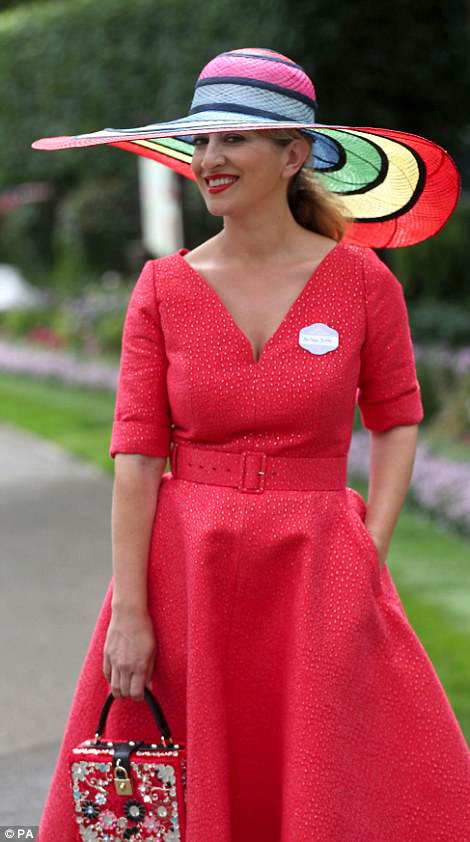 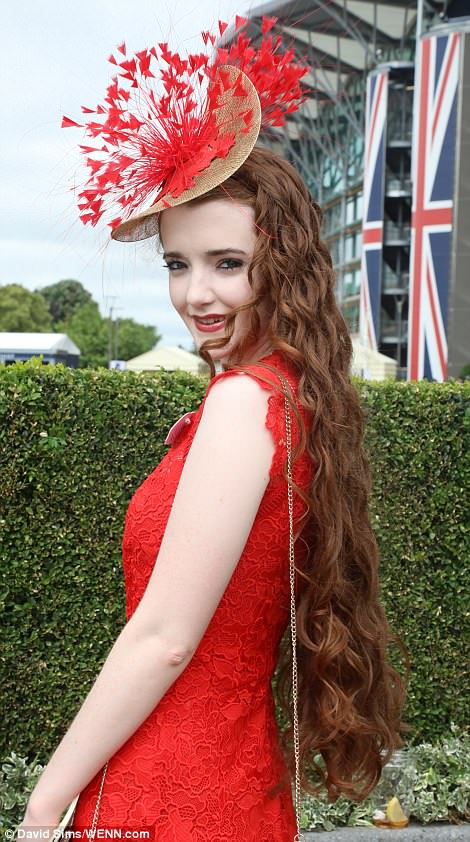 Rainbow bright! A woman in a red dress stood out from the crowd in a colourful striped hat (left). Another lady in red looked stunning in a lace dress and feather trimmed millinery 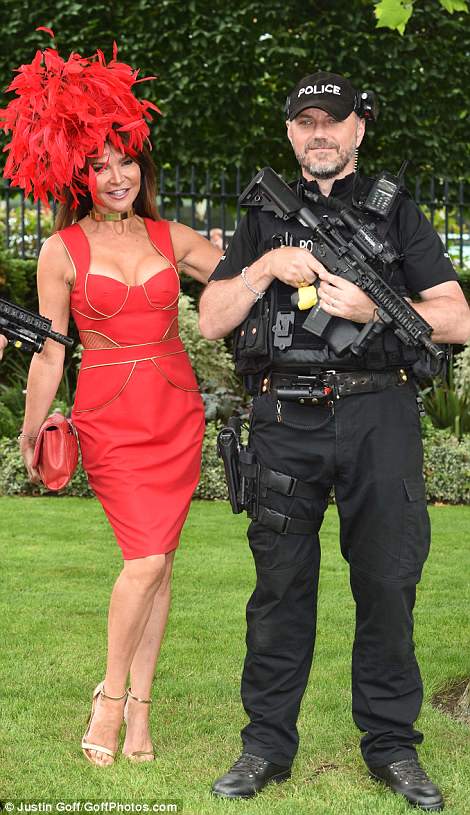 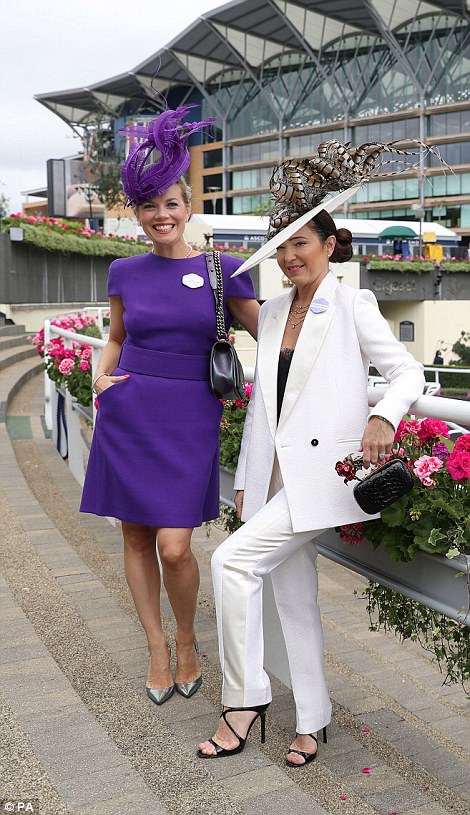 Socialite Lizzie Cundy couldn’t resists posing for a snap with armed police officers as she arrived in a daring scarlet ensemble. Right: Boutique owner Charlie Elmy-Britton and milliner Layla Leigh pose up a storm for the cameras

An ugly brawl broke out at a Saturday race meeting at the track in May, putting a spotlight on the increasing use of recreational drugs and excessive drinking at racecourses. One of the biggest changes that racegoers will notice at the royal meeting is the absence of ‘beer hawkers’ — staff carrying beer on their backs to sell in the crowds.

Other new measures in the ‘behavioural management’ plan include an increase in the high-visibility response team to more than 100 stewards, and more specialist incident spotters.

More than 20 sniffer dogs will also patrol the Berkshire course, and in an unprecedented move, the canines will be seen near the toilets, in an effort to reduce recreational drug use.

Up to 300,000 people are due to descend on the event over the course of five days, including the Queen who has attended every year since she came to the throne in 1952.

Yesterday, Her Majesty was accompanied by her grandson Prince Harry, 33, and his wife the Duchess of Sussex, 36, who was making her Ascot debut. 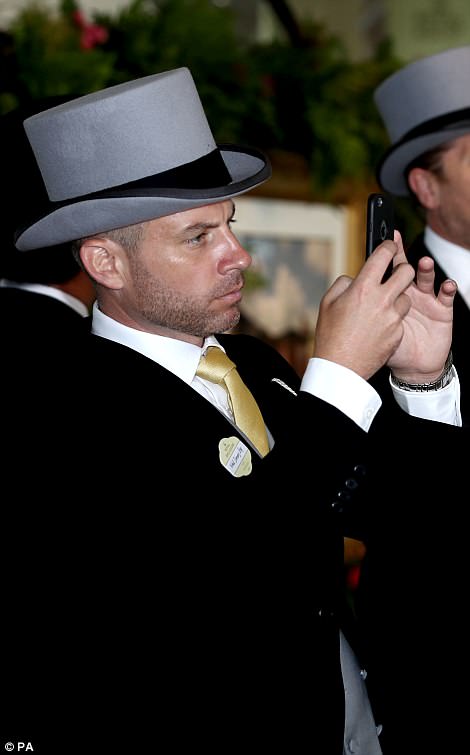 Rocking the monochrome look! A racegoer looked chic in a white dress teamed with a straw hat, trimmed with black ribbon (left). A dapper racing fan paused to capture some photos before the action got underway on the track Dressed to impress!  A very dapper gent went all out in a top hat and tails (left). Time for a quick change! A racegoer paused to swap her trainers for high heels ahead of her big day out (right) 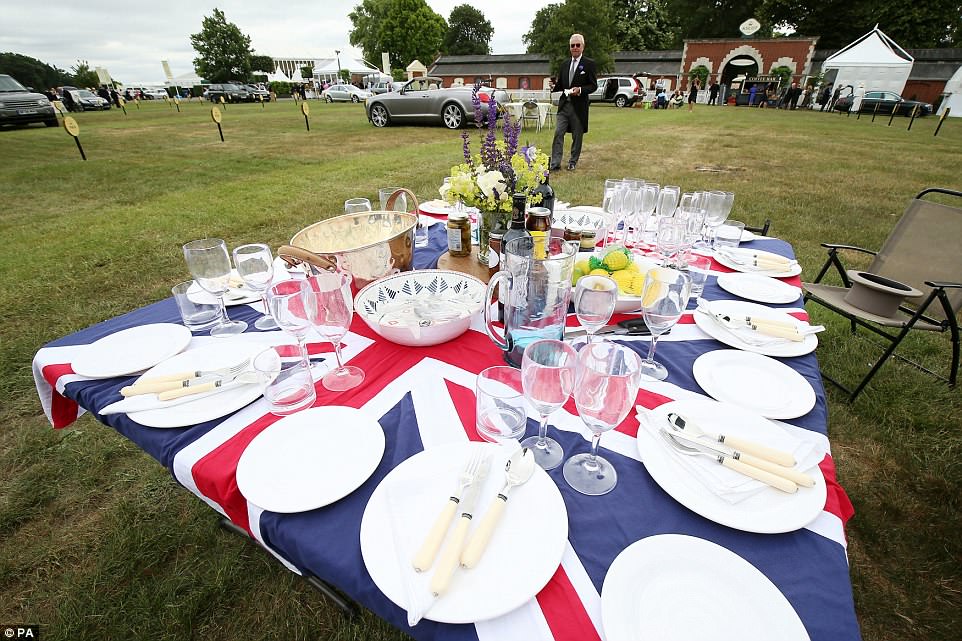 A very posh picnic! A table set with bone handled cutlery and a Union Jack tablecloth was no doubt the envy of other day trippers 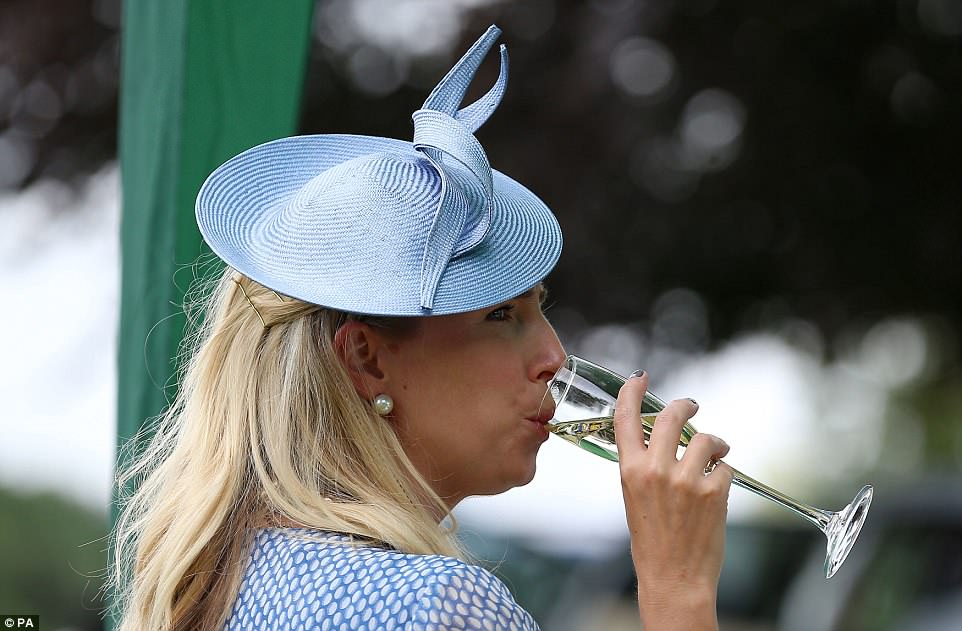 Start as you mean to go on! A racegoer sipped from a flute ahead of the sporting action on day two The Duke and Duchess of Sussex presented the trophy to the winner of the St James’s Palace Stakes.

Princess Anne, and the Duke and Duchess of Cornwall also attended, as did Princesses Beatrice and Eugenie.

The Duke of Cambridge stakes takes place this afternoon, but Prince William has only once presented the trophy so his presence today is by no means guaranteed.

And his wife Kate, who has attended in previous years, may well stay at home with her newborn, Prince Louis.

Zara Tindall will also be a notable absentee from this year’s proceedings after giving birth to her second child – a daughter – on Monday, at Stroud Maternity Unit. 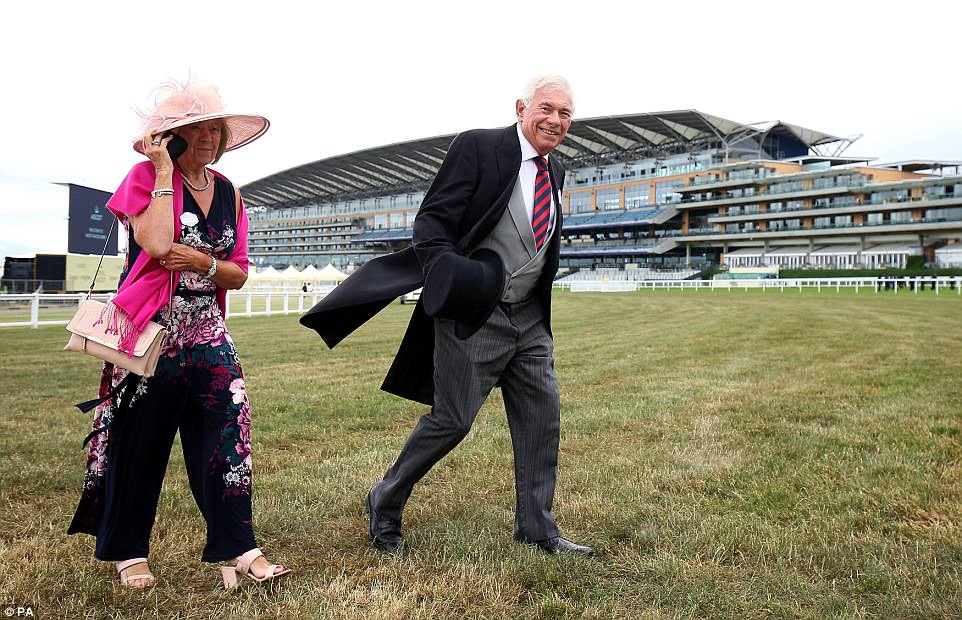 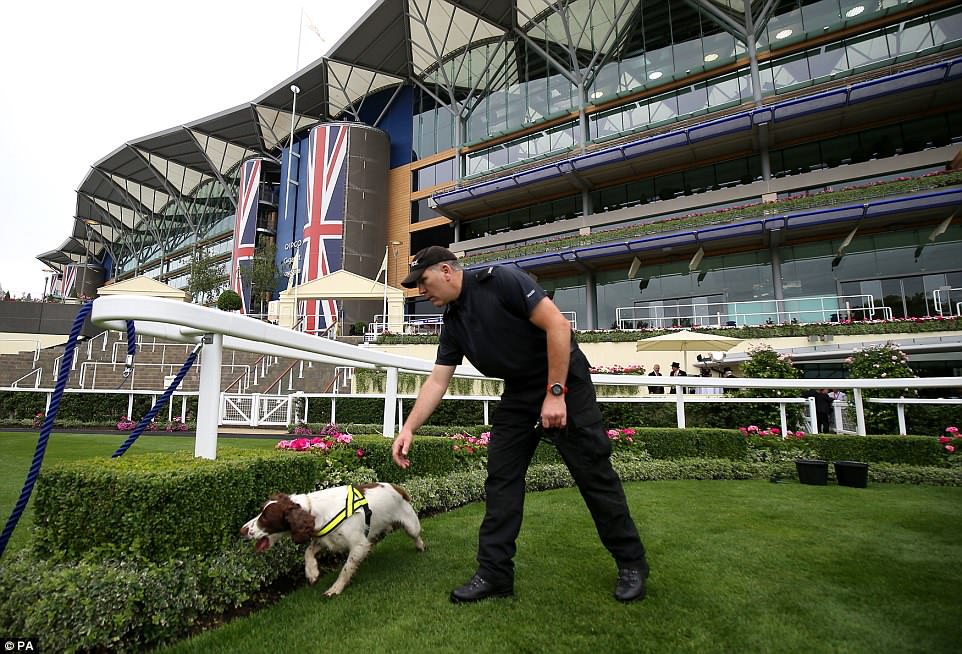 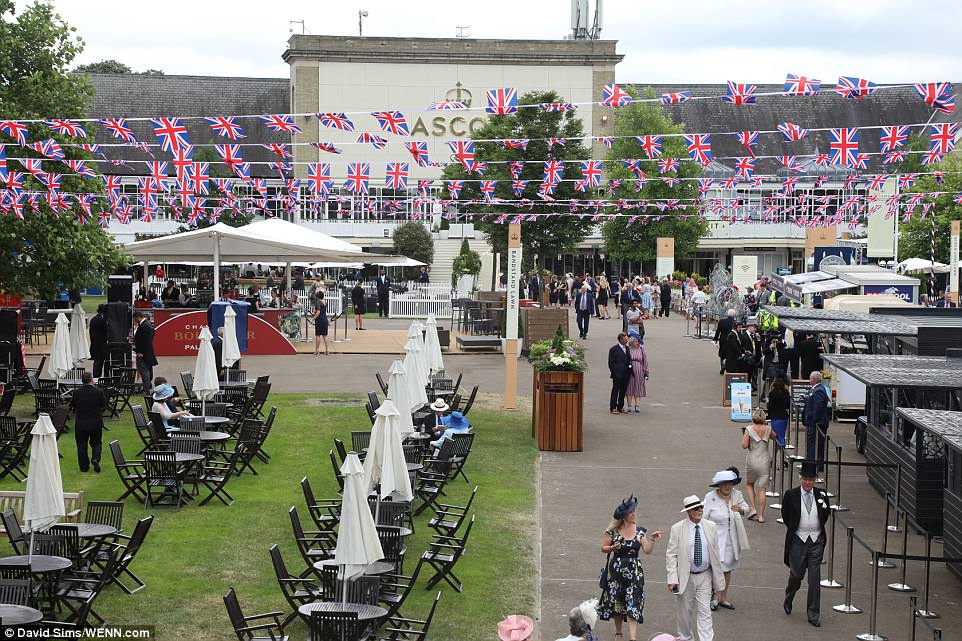 Ready for action! Racegoers started streaming through the gates at around 10.30 for the second day of the popular racing festival