‘Sandwich Cream sounds borderline evil!’ Salad Cream fans up in arms over Heinz’s plans to rebrand the condiment after more than a century on supermarket shelves

Heinz announced yesterday that it plans to rename Salad Cream, Sandwich Cream after 104 years to ‘fairly represent’ how people use it.

However, shoppers are less than happy about the change of name taking to Twitter to share their outrage over the ‘borderline evil’ decision.

Many argued that there was no logic in renaming the product based on how customers used it, and made their own cheeky suggestions for rebranding.

One wrote: ‘Just because salad cream is not used for salads. I don’t put tomato sauce on my tomatoes either better rename that too.’

Others said that while they were prepared to accept some rebranding this was a step too far.

‘I said nothing when they changed Marathon to Snickers, even Opal Fruits becoming Starburst but this is just a a step too far… lettuce keep salad cream’ fumed one.

Another added: ‘What fresh hell is this?! I wouldn’t dream of putting salad cream in a sandwich but I love it on a side salad especially with an omelette.’ 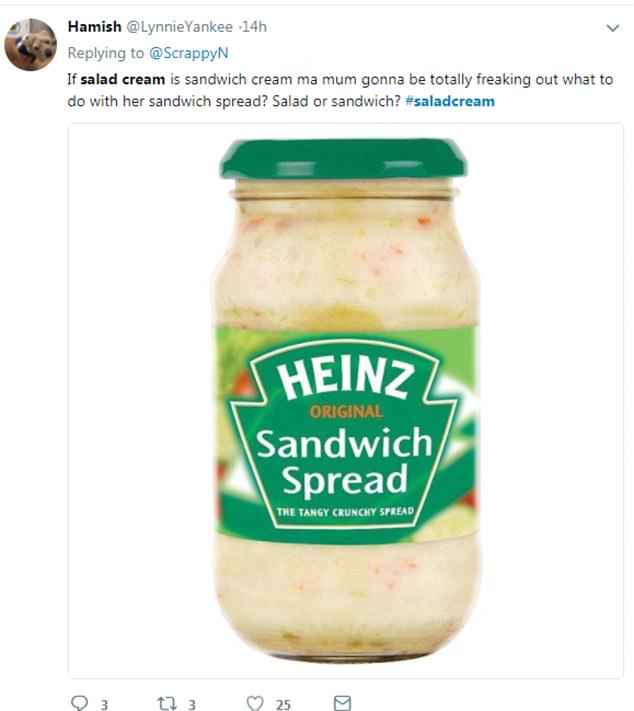 Some were inclined to blame the younger generation with one tweeting: ‘To add to the long list of things Millennials have killed: HEINZ SALAD CREAM’.

The condiment has been called Salad Cream for 104 years but Heinz announced yesterday that it is set to ditch the iconic name of the zingy white sauce because it no longer ‘fairly represents’ how most people actually use it.

Only 14 per cent of buyer’s dress salads with the sauce, according to Heinz, as it’s now much more popular to use it as an accompaniment to tuna, ham or cheese in sandwiches as an alternative to mayonnaise.

The news could trouble some traditionalists who rallied to save the brand from extinction nearly 20 years ago.

A spokesman for Heinz told trade journal The Grocer the name no longer ‘fairly represents the product’s ingredients or usage occasions’.

What are the ingredients in Heinz’s Salad Cream?

Salad cream is always based on an emulsion of about 25–50 percent oil in water, emulsified by egg yolk and acidulated by spirit vinegar,

Its own research discovered just 14 per cent used the cream on salad with other popular uses now being as an accompaniment to tuna, ham or cheese in sandwiches, usually as an alternative to mayonnaise.

According to The Grocer, it is considering the name ‘Sandwich Cream’ to represent its appeal to ‘younger shoppers.’

The Heinz spokesman added: ‘As a market leading business, Kraft Heinz continues to audit its portfolio in order to meet the needs of consumers.

‘There are consumers now who haven’t grown up with the brand in the household and just don’t know about the iconic zingy flavour or what to eat it with.’

The consultation process means the earliest a new name will be introduced is in September.

In 1999, it was revealed that Heinz were about to ditch the brand but once the leak was published it led to a major protest by shoppers and it saved the brand.

The publicity helped sales and Heinz took advantage by relaunching Salad Cream in new-look packs and putting the price up. 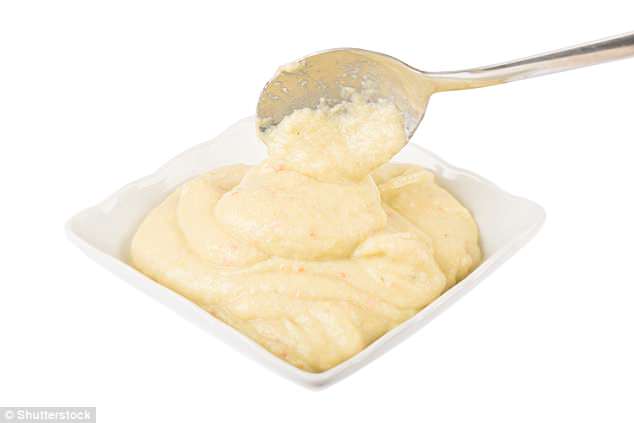 Salad cream is a creamy, pale yellow condiment based on an emulsion of about 25–50 percent oil in water, emulsified by egg yolk and acidulated by spirit vinegar

The history of Heinz Salad Cream

1914 – Heinz brings Salad Cream to market after eight years in development. It becomes popular with the working classes.

1999 – Heinz threatens to discontinue the brand following falling sales due to Britons switching to mayonnaise but it is saved in 2000 after a national outcry.

2010 – Heinz launches a Lemon and Black Pepper version after sales revive as the sauce is lower in fat than mayonnaise.

2018 – Heinz reveals it is changing the name of the iconic brand to reflect modern uses for the condiment. The frontrunner is ‘Sandwich Cream’