Tiger Woods wowed fans on Sunday, after he was crowned winner of The Masters 2019. It was the professional golf player’s first major title in more than 11 years. Having nabbed the coveted green jacket for a fifth time, Tiger, rushed to embrace his two children: Sam and Charlie. The 43-year-old then went to hug his girlfriend, Erica Herman, 43.

Never have I been more proud of Tiger Woods…

As the world looked on at the victory, many took to social media in order to congratulate the golfer on his success.

Amongst the well-wishers was Sarah Ferguson, who used her public Instagram account to send a message to the sportsperson.

Sharing a capture of a moment after his win, the Duchess of York revealed she was incredibly proud of the golfer, adding that he is “an amazing friend”.

“Never have I been more proud of @tigerwoods,” she wrote.

“Good days and bad days, Tigers’ heart is loyal, steadfast and he is an amazing friend #champion #golf #sport.”

Upon seeing the capture, many people rushed to share their own comments. 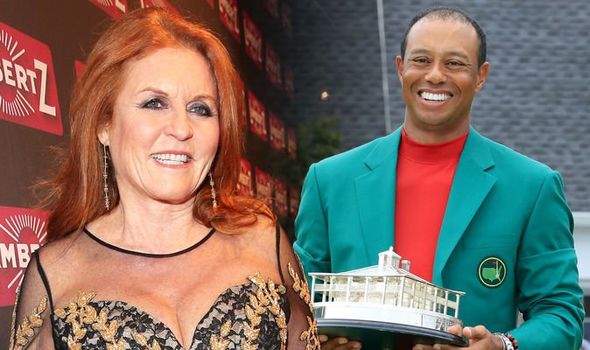 Another penned: “I love Tiger Woods @sarahferguson15 Always have. He so deserved this win.”

“Amazing to see Tiger back after all he went through,” commented a fourth.

An unearthed capture of Sarah from 1997 shows her sitting beside Tiger’s mum Tida Woods, while they watch him play in the Byron Nelson golf tournament.

The Duchess of York often gives royal fans an insight into her life via Instagram. 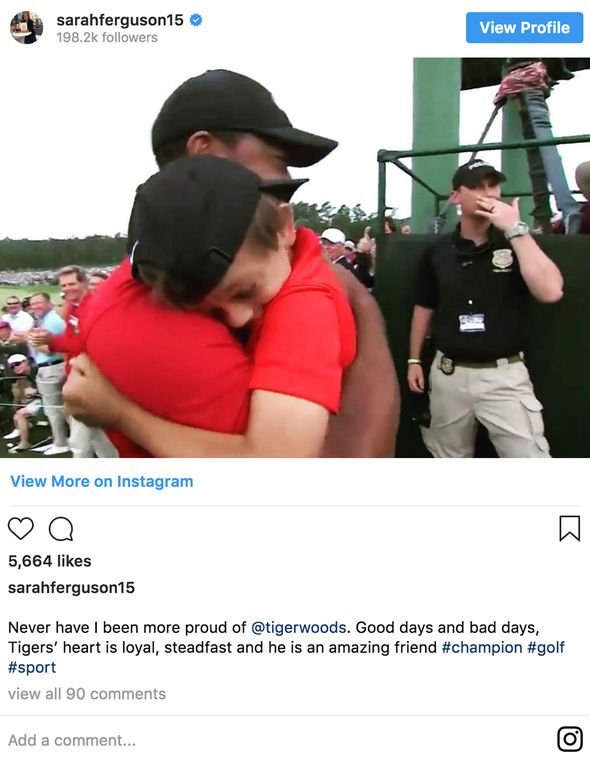 Sarah, Duchess of York and Princess Michael of Kent arriving at Ascot Races

Sarah has been given the nickname Fergie by some people over the years.

But, what does the mother-of-two call her daughters Princess Eugenie, 29, and Princess Beatrice, 30, who she shares with Prince Andrew, 59?

It seems that Sarah has some sweet alternative monikers for the two princesses.

She affectionately calls her elder child “Trixie-Belle” – a name which the royal revealed in an Instagram post last year.

Sarah Ferguson: Five facts about the Duchess of York

Sarah is the second daughter of Major Ronald Ferguson and Susan Mary Wright.

Her parents divorced in 1974, with her mother going on to marry polo player Héctor Barrantes in 1975 and moving to Argentina. Sarah stayed in the UK with her father, who remarried in 1976 and went on to have three more children.

She wore an ivory-silk wedding gown designed by Lindka Cierarch which had a 17 foot train and 20 foot veil. As is tradition, Sarah wore a diamond tiara, and her wedding band was crafted from Welsh gold.

The couple spent their honeymoon abroad the real yacht Britannia off the coast of the Azores Islands.

However the couple remain on good terms, even living together in the Royal Lodge from 2008 until Sarah moved to a ski chalet in Switzerland they bought together in 2015.

Sarah has written children’s books for many years, her first being a series about Budgie The Helicopter in the early 90s.

She has also been the US spokeswoman for WeightWatchers after famously battling her weight over the years.

On top of commercial endeavours, the Duchess devotes plenty of time to charity, including Children in Crisis, which she founded in 1993.

She has over 200,000 followers across the platforms, and shares many insights in to her life.

Most of the Royal Family are not on social media, but are represented by Kensington Palace, Buckingham Palace, or Clarence House.

Sarah’s daughters, Beatrice and Eugenie, are the exception, with both joining their mother on social media.