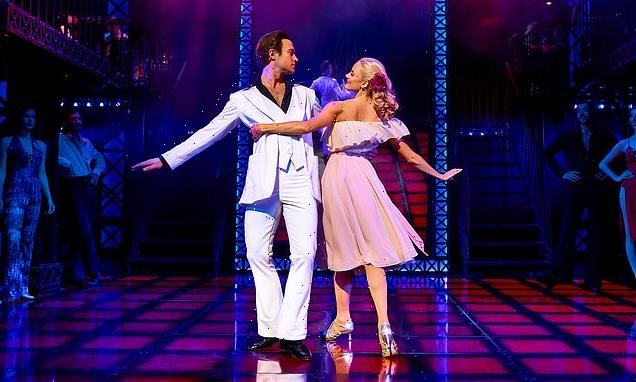 A disco inferno it ain’t: Bill Kenwright’s Saturday Night Fever will help get your boogie shoes on and has plenty of strut and swagger but lacks, well, fever

This show, directed by the prolific Bill Kenwright and first seen four years ago, is not so much a homage to the 1977 musical mega-hit film starring John Travolta and its best-selling score (outsold only by Whitney Houston’s The Bodyguard) as a broader paean to the Bee Gees’ oeuvre.

So as well as the classic Night Fever and the likes of You Should Be Dancing and Jive Talkin’, we also get added-value tracks such as What Kind Of Fool from the Barbra Streisand Guilty album of 1980 shoehorned into the proceedings.

The action is backed by three almost ghost-like figures performing most of the songs –Bee Gees looky-likeys in semi-darkness, dressed in shiny bomber jackets and the requisite big wigs – from whom faultless falsettos exude, leaving the dancers to strut their funky stuff in more flares and shiny fabric than you can point a choreographed finger at. 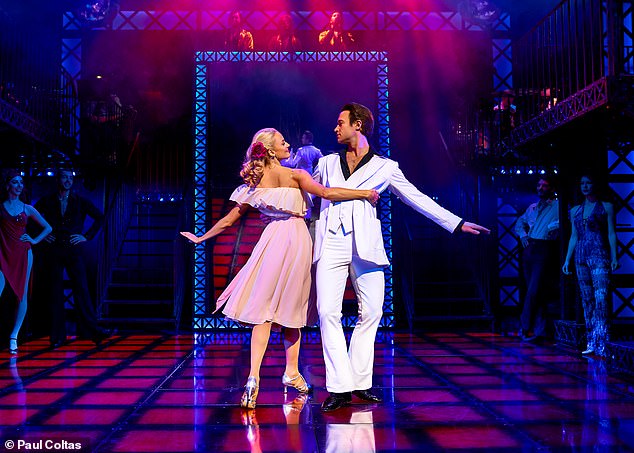 Richard Winsor (formerly Caleb in Casualty, above, with Olivia Fines) has plenty of strut and swagger as Tony Manero but never really suggests the joy that dancing gives his character

As Tony Manero, the Brooklyn paint-shop assistant with dreams of dancing fame, and that white suit, Richard Winsor (formerly Caleb in Casualty) gives us some balletic moves he learned working with Matthew Bourne.

He has plenty of the required strut and swagger but never really suggests the joy that dancing gives his character. Stuck in the Hustle style of the 1970s, the choreography feels laboured and repetitive too.

As for the darker elements of the story – gang violence, rape, suicide – it’s all rushed through before a credibility-stretching ending (same as the film).

The Italian Catholic lad who’s got a girl pregnant sings Tragedy (with a hint of the Steps cover version) before throwing himself into the river; we later get the syrupy Immortality. All a bit clunky.

If it’s just the Bee Gees hits well sung and getting on your boogie shoes you want, you won’t be disappointed, but the big dance-off contest apart, this lacks the fever of the title. A disco inferno it ain’t.