‘Models are getting skinnier these days!’ Viral clip of a fashion show in Saudi Arabia that saw clothes ‘worn’ by DRONES rather than women is mocked on social media

Saudi Arabia broke down barriers in the fashion industry when it held its first ever fashion week earlier this year.

However, it seems that there is still a way to go after a video has emerged of the very unusual models chosen for one of the show.

The clip of the catwalk show was shared on Twitter by user Jina on Wednesday, and sees clothes make their way down the runway via drone.

Hung from the airborne machine, the bodyless ensembles have been compared to a ‘ghost fashion show’ on social media.

According to reports no female models were used because male audience members were present, proving an issue when it came to the country’s modesty customs.

However, many were left in stitches by the unusual means of displaying the clothes. 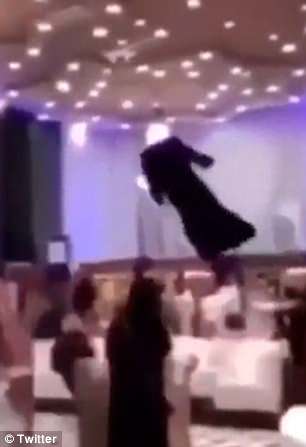 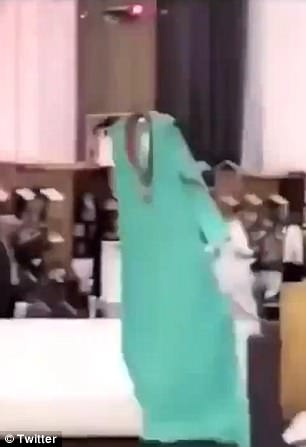 The video sees the bodyless outfits ‘flown’ down the runway, reportedly done so because male audience members were present

Many were left in hysterics over the bizarre clip, comparing the outfits to Harry Potter creatures, dementors

The tweet has thus far amassed more than 79,000 likes and 54,000 retweets in the 24 hours since it has been shared with many of her followers finding it equally amusing.

One wrote: ‘I was wondering what would look good hanging from my drone next season.’

Meanwhile another likened the ghostly image to Harry Potter creatures dementors, commenting: ‘Where’d they get the models? Hogwarts?’

However, while many saw the funny side others were quick to remark on how uncomfortable they found the footage.

One wrote: ‘Saudi Arabia, where drones have more rights than women’.

However, others admitted that they found the footage uncomfortable to watch

Agreeing another added: ‘This is actually sad and disturbing.’

The catwalk shows came with strict rules, however, including female only audiences and a ban on social media and male designers were banned from backstage ahead of their own shows.

However, the women of Saudi Arabia deemed the occasion a big step forward for the country.

Saudi born and Dubai based designer Arwa Al-Banawi told the New York Times: ‘Yes it has been the most challenging event I have ever been a part of, but the only way to look is forwards not backward. Next time will be better.’