Who’s a clever girl? Talented Scout the parrot can open a door, throw away the rubbish and play BASKETBALL (and her owner hopes she’ll one day show off her skills in a Crufts for birds)

She can fetch, roll over and play dead.

But talented Scout is not a pampered pooch learning new tricks.

The performing pet is actually a Senegal parrot who delights her owner – and 8,000 Instagram followers – with a remarkable repertoire of skills.

Owner Sara Hannant, 28, an IT technician from Cheltenham, Gloucestershire, began training Scout shortly after she brought her home as a chick three years ago.

The intelligent bird, who stands roughly 9in tall, can now slam dunk a miniature basketball, score a strike in 10-pin bowling and even throw away the rubbish.

She has also learnt how to open a door, play darts – and, fittingly, how to take a bow. 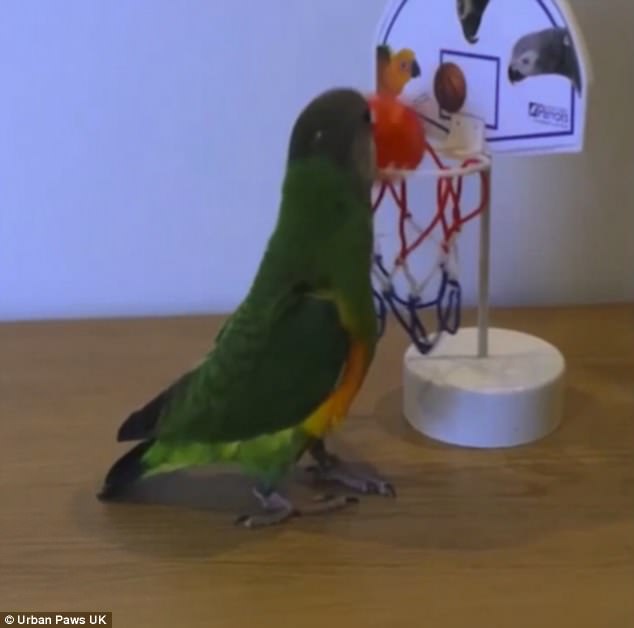 Mrs Hannant, who lives with husband Chris, 32, explained she began working with Scout after watching parrot training videos on YouTube.

‘You give the animal a choice about learning,’ she explained. ‘A good trick to start with is called “target”.

‘Parrots will follow a stick, so you can get them to move wherever you want.

‘I hold a chopstick in front of the parrot. Most of the time they will touch it, because they are curious little animals.

‘You reward them, and then you start moving the stick and they follow it. That’s one of the basic principals.

‘For the bowling trick I would put the stick by the ball and usually Scout would knock it. I would click and reward her every time she did that.

‘Eventually you can take away the stick and she will just go and hit the ball.’ 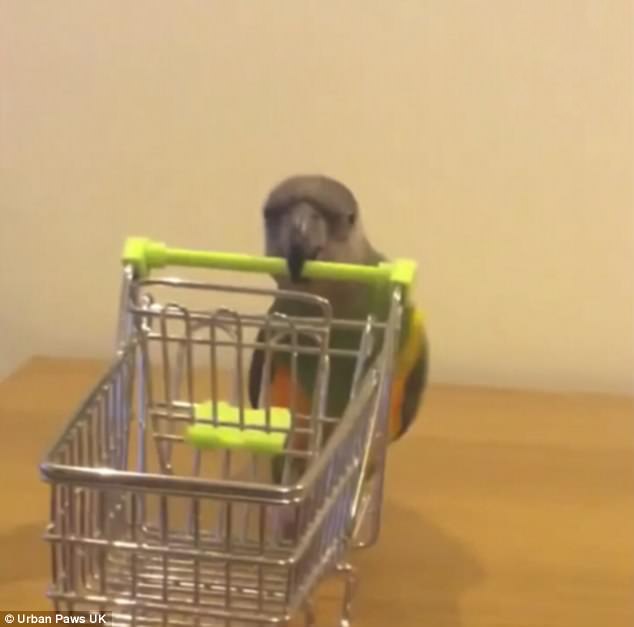 Need some help with the shopping? Scout can use its beak to push a miniature trolley 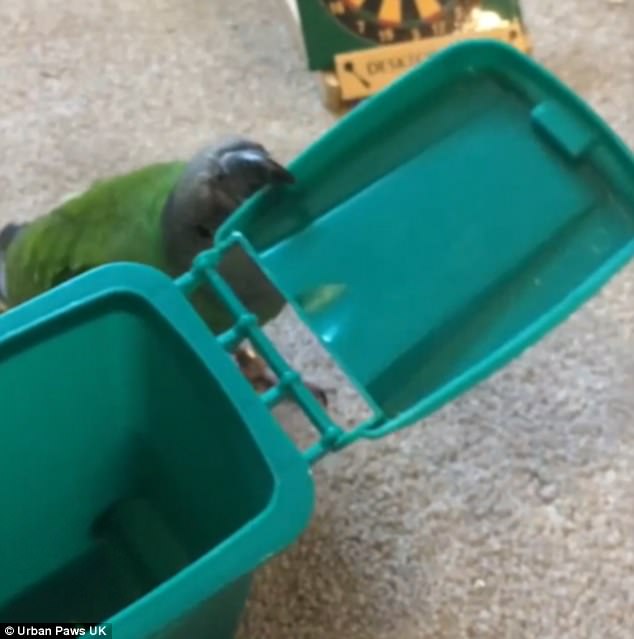 What’s better than a pet that can help out around the house? This picture shows Scout tackling the rubbish 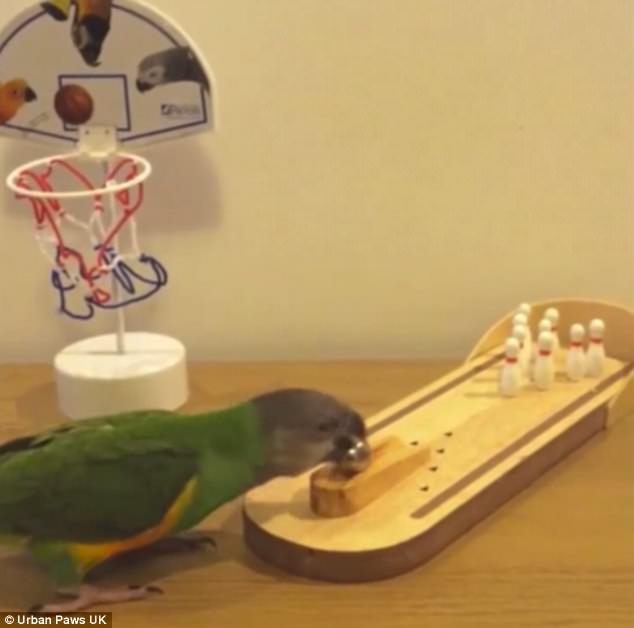 Scout sometimes picks up a new trick almost immediately. Other times Sara will work with the bird on the same activity for a few minutes a day before it is mastered.

What is a Senegal parrot?

Native to West Africa, Senegal parrots grow to about 23cm long, and are distinctive for their relatively large head and beak.

As adults the parrots have a distinctive green and yellow colouring to their front.

The birds, which thrive in open woodland, can live from 25 to 30 years in the wild, and have been known to live for up to 50 in captivity.

Sara practises ‘force-free training’, which means she teaches Scout by rewarding her rather than physically forcing her.

Scout’s favourite treat rewards are sugar snap peas and sunflower seeds. However these are only allowed in moderation due to their fat content.

Sara made Scout’s social media pages in 2016 as a way to connect with other bird owners. However the clips and pictures of the bird’s incredible tricks soon led to her developing a devoted following. They even caught the eye of TV executives.

Sara was even contacted by a talent scout from America’s Got Talent, who asked whether she might want to audition for the show.

‘Scout’s a good flyer, but I don’t think she’d particularly like to fly over to America,’ Sara joked. ‘I might consider Britain’s Got Talent one day but I’d have to test Scout with some smaller audiences first, to see how she handles the stress.

‘I’d be afraid she’d fly off into the audience or land on Simon Cowell’s head or something.’ 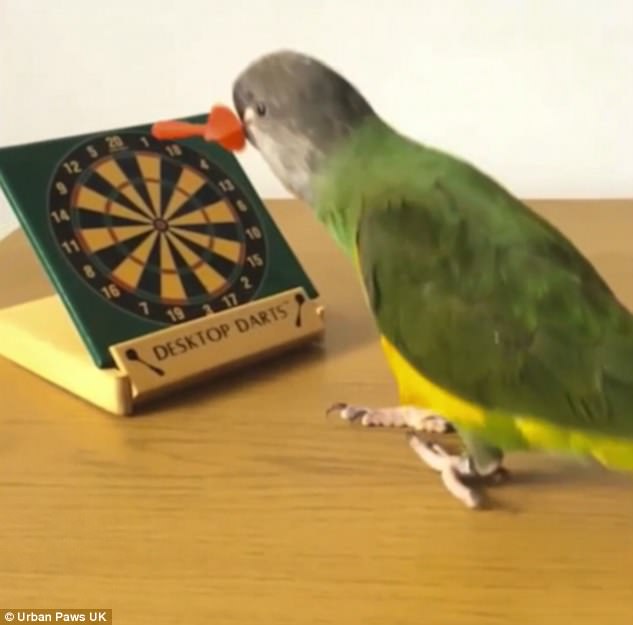 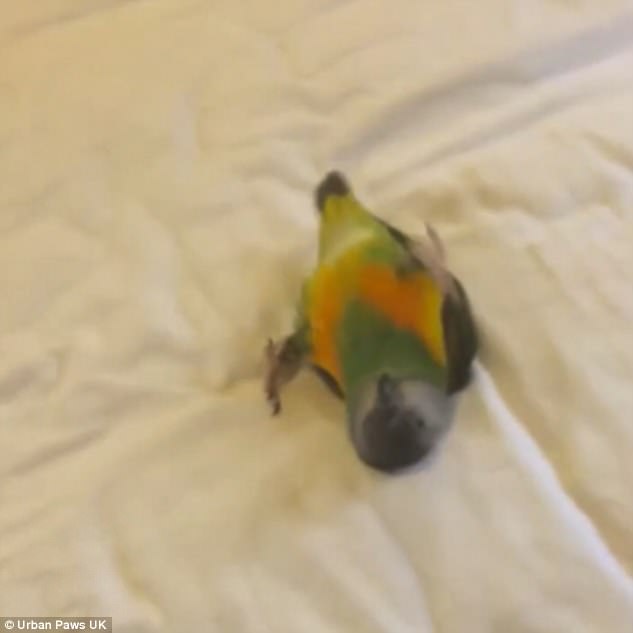 However while Sara certainly enjoys helping Scout learn new skills, she insists having a parrot is more like adopting a new lifestyle than owning a pet.

She said: ‘Parrots are extremely clever and require a lot of stimulation – it’s important for their mental health to keep their brains active.’

She continued: ‘Parrots need a lot more dedication than people realise and I hope by doing this I can help educate owners.

‘So many birds have horrible lifestyles and I really want to make a difference. Parrots are so intelligent, I think, beyond any animal.

‘I put my videos online to encourage others to give training a go. It doesn’t take hours of work, it can just be a few minutes a day.

‘A lot of new toys are being brought out to encourage parrots to forage. Parrots love to chew so giving them an outlet for that is very important.

‘We’re lucky – I live close to my office so Scout is never alone for more than a few hours.

‘People think parrots aren’t very cuddly but her favourite thing in the evening is to snuggle up and have us scratch her head. She is so affectionate when she wants to be.’

Sara is currently training Scout to fly through a hoop. She hopes to one day build her up to the stage where she can compete in a bird version of the agility courses dogs compete in at dog shows.

She said: ‘Maybe one day we’ll actually see a Crufts for birds – how good would that be!’

In the meantime, Sara has signed up with top UK animal talent agency Urban Paws in the hope she can showcase Scout’s skills on a bigger scale and help educate people about properly caring for their parrots.