How to sculpt a brand new body in just EIGHT weeks: Woman, 34, who transformed her figure reveals the fast-growing Australian diet and exercise program behind her success

And while it’s no easy task, a dedicated Rhana, 34, stuck with it and has since spoken to FEMAIL about being named the female global challenge winner.

Earlier this year, Rhana, from Queensland, debuted her incredible body transformation after following a strict exercise regime for just eight weeks (before and after)

‘I was going to the gym a lot before I started F45 but I was plateauing so I did a trial and really loved it,’ Rhana told FEMAIL.

‘I had done a few of the eight-week challenges before but over Christmas I went overboard and was just eating and drinking. I was the heaviest I had been in ages.’

To overhaul her body and boost her fitness both inside and out, Rhana decided to do the eight-week challenge in February.

‘I put my heart into it – I was exercising six to seven times a week and I stuck to the food plan perfectly,’ she said. 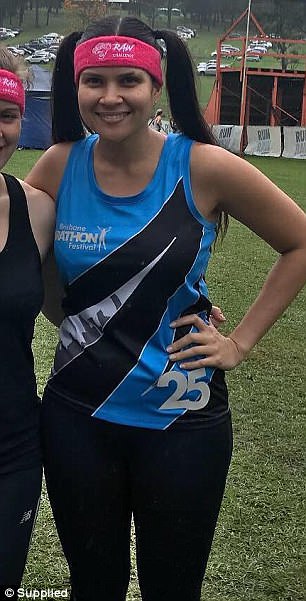 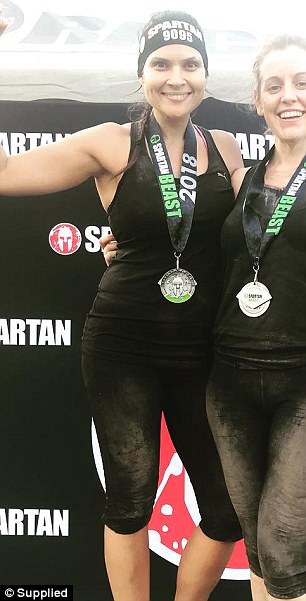 And while it’s no easy task, a dedicated Rhana stuck with it and was named the female global challenge winner due to their impressive results both inside and out

‘I was drinking no caffeine, no alcohol and no sugar and little carbs in the first two weeks which was the hardest because of cravings and after that I reintroduced carbs.

‘The last phase was the shredding phase and that’s where I really upped my training – I was doing double sessions some days.’

Rhana was so detemined that she even worked out before social commitments like weddings as she believes ‘once you cheat, you keep on cheating’.

The hardest part, she said, was the food prep.

Jason, from Carrara, was named a global winner for the latest challenge along with Rhana, shed a staggering 17.9 kilograms over the duration of the challenge and lost 10.3 per cent body fat

‘You need a whole day to prep so you need the time – and if you don’t prep it stuffs you up so you need to prioritise the food factor,’ she said.

‘I did not drink one drop of alcohol or cheat once – that is how you succeed and develop good habits for the future.

‘Of course life takes over once you finish but it really kicked me back into gear and I am still following the same basic principles. My advice is to adopt a 80/20 approach to health – 80 per cent healthy and 20 per cent cheat – and food prep.’

Rhana won the challenge after dropping from 68 kilograms to 60.4 kilograms and lost a staggering 6.5 per cent body fat. 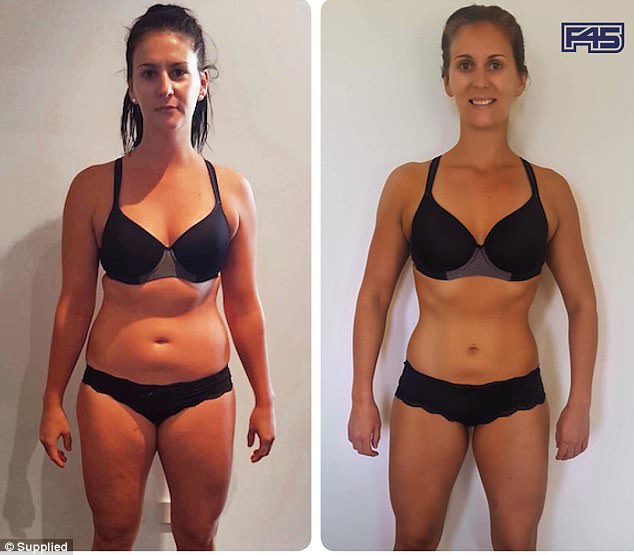 And she’s not the only one, with thousands of people the world over seeing incredible results with F45.

So how does the three phase program work?

The first phase is all about alkalising and detoxing the body by focusing on cleansing, eliminating, preparing and stimulating specific functions of the body.

During this phase the body is cleansed from a build up of toxins and there is a focus on removing fluid retention and beginning the process of eliminating sugar cravings.

In the first two weeks, they see huge results on the scale due to the removal of fluid retention. 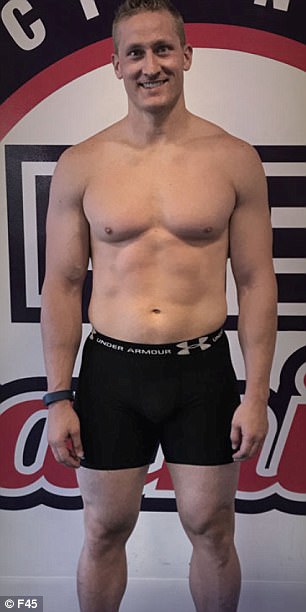 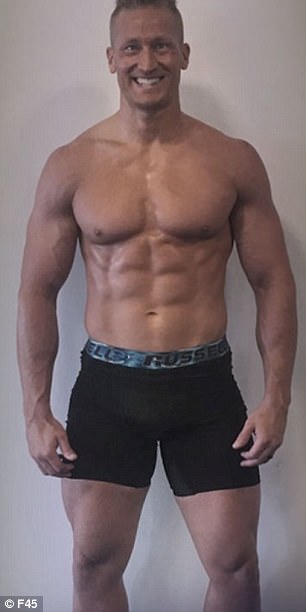 Justin Anderson lost 10.6 kilograms and 7.6 per cent of fat when he did the challenge

The second phase is about defining the physique and the nutrition is based on a high protein diet to support muscle hypertrophy, assist in muscle recovery and repair and create healthy fat loss results.

A low intake of carbohydrates encourages fat storage to be used as the energy source instead of glucose. This is the ‘ultimate fat shredding phase’.

Steve, a 49-year-old concrete dispatcher from Erindale, ACT, started F45 in 2016 after his daughter saw a significant change in her body shape  and energy levels.

And while he was pleased with his results after attending the studio four times a week for a year, Steve decided to try the challenge in October, 2017 to see how he would go.

He was later named the male winner of the challenge and told FEMAIL previously that while he was doing 45 minute training sessions four times a week throughout the period, he believes his amazing results were solely due to his diet change.

‘The training side never changed so it’s proof of how much of a difference your diet makes,’ he said.

‘I didn’t weigh myself the whole time outside of my initial scans so it was amazing to see my before and after photos and and see that I had lost five per cent body fat and a kilo in that time.’

Average day on a plate during the challenge during each phase

Alica Walker is the previous female winner of the challenge and managed to shed 11.1 kilograms and 9.3 per cent of fat during her eight weeks on the strict Australian program 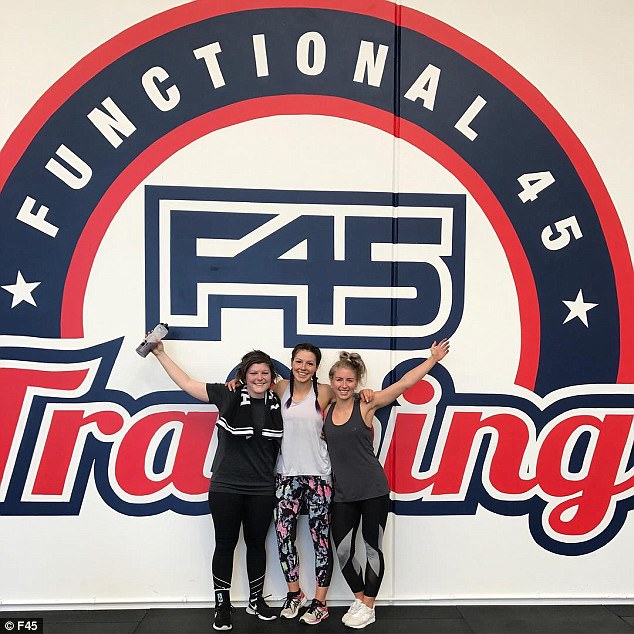 ‘Once my body got used to the new clean diet and no coffee my energy levels skyrocketed, I had clearer skin and I just felt so much better,’ she said

Steve recommends those who do the challenge do what he did and ignore the scales for best results.

‘Use the mirror to gauge your progress not your scales,’ he said.

‘They can throw you off. The mirror is the best and only way to truly see how you are doing.’

F45, which stands for Functional 45, has achieved a cult-like status across the globe since it officially launched in 2014, with nearly 500 studios just in Australia.