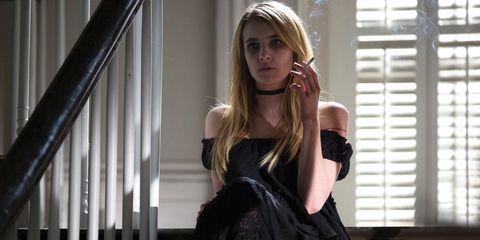 While the title of Most Iconic American Horror Story Character is hotly contested, there’s no competition when it comes to the most GIF-ed. Emma Roberts’ Madison Montgomery might have died at the end of the third season, Coven, but her profile’s only grown over these past four years thanks to “Surprise, bitch.” And earlier this month, Roberts confirmed her return to the AHS fold for the upcoming eighth season, Apocalypse.

Given that Apocalypse is the long-awaited Murder House/Coven crossover, Roberts’ presence makes sense, and today on Instagram she shared the first actual image of Madison on the Murder House set.

I bring you Madison Montgomery on #ahs8 ? Does the bitch survive the #apocalypse ? @mrrpmurphy ? @onlycatsandfood

I bring you Madison Montgomery on #ahs8 ? Does the bitch survive the #apocalypse ? @mrrpmurphy ? @onlycatsandfood

EW notes that Madison is standing in the spot where the gazebo once stood, after Ben (Dylan McDermott) built it to cover the evidence of Hayden’s (Kate Mara) corpse. McDermott and Connie Britton are confirmed to return as Ben and Vivien, while Jessica Lange will also reprise her Season 1 role of Constance, making her first appearance on the show since Season 4, Freak Show.

Producer Alexis Martin Woodall has said the story “begins with the end of the world—and then our world begins… It starts in the real world. It’s very tangible, and it’s a familiar panic.” Creator Ryan Murphy stated that the show takes place in the near future. You can read more details about Apocalypse over here.

American Horror Story: Apocalypse will premiere on FX on September 12.