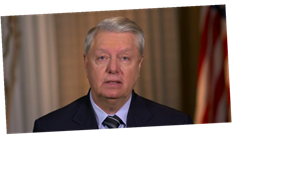 Senator Lindsey Graham has a personal reason to oppose a ban on assault weapons – he’s the owner of an AR-15. On “Fox News Sunday,” the South Carolina Republican said he owns the weapon – a type used in many mass shootings, including last week’s shooting at a supermarket in Colorado – so he can protect against a “gang” during a natural disaster.

Fox anchor Chris Wallace asked Graham what is wrong with debating a ban on assault weapons and large capacity magazines. Graham said there is nothing wrong with debate and that he “would challenge Senator Schumer to bring the assault weapons ban to the floor of the U.S. Senate,” adding that he believes the bill wouldn’t get enough votes.

Graham has long been an opponent on an assault weapon ban.

“I own an AR-15,” Graham told Wallace. “If there’s a natural disaster in South Carolina where the cops can’t protect my neighborhood, my house will be the last one that the gang will come to, because I can defend myself.”

Graham said “you don’t have to have a AR-15, but if you have one lawfully, I think you should be allowed to keep it.” He then blamed “mental health” for issues with guns.

While some Republicans like Graham argue mental health is the reason for mass shootings, Democrats argue it is access to guns – and that extensive background checks could prevent guns from getting into the wrong hands.

Graham has spoken about his personal use of an AR-15 before, saying after the Sandy Hook Elementary shooting in 2012 that he opposed a ban on assault rifles.

“I own an AR-15. I’ve got it at my house,” Graham said on “Meet The Press,” just days after the shooting that killed 20 children and six educators. “The question is if you deny me the right to buy another one, have you made America safer? I don’t suggest you take my right to buy an AR-15 away from me because I don’t think it will work, and I do believe better security in schools is a good place to start.”

Gun control advocates criticized Graham’s use of an AR-15 after his appearance on “Fox New Sunday.”

“The suggestion that a twerp like Lindsey Graham could be some sort of tough guy fending away apocalyptic invaders is just the narrative they sell. It’s what the gun lobby wants Republicans to say in order to sell more guns,” Parkland shooting survivor and gun reform advocate Cameron Kasky said on MSNBC.

“So now we know that as a US Senator, you have two choices of action during a natural disaster in your state: 1) Fly to Cancun, or 2) Grab your AR-15, barricade your front door and protect yourself from all the ‘gangs.’ Got it,” tweeted Golden State Warriors coach Steve Kerr, who was referring to Sen. Ted Cruz and Graham. Kerr, who lost his father to gun violence, has often advocated for gun control.

Fred Guttenberg, whose daughter, Jamie, died in the Parkland shooting, also tweeted about Graham’s comments on assault weapons. “The last thing my daughter saw was an AR 15 as she ran down the hallway at her school in Parkland,” he wrote. “One shot severed her spinal cord and killed her. Are you seriously OK with announcing to future school shooters that they need an AR-15 to feel truly safe?”

Following last week’s shooting at a Denver grocery store that killed 10, Senator Chris Murphy, a Connecticut Democrat, reintroduced the Background Check Expansion Act, which would extend a background check requirement to unlicensed and private firearm sellers before selling a firearm. Universal background checks are largely supported by Americans but have not gained traction in Congress.

Earlier this month the House approved on two bills that would expand background checks on firearm sales. While these are first significant gun control measures passed by the House since President Joe Biden took office, the legislation is likely to stall in the Senate.