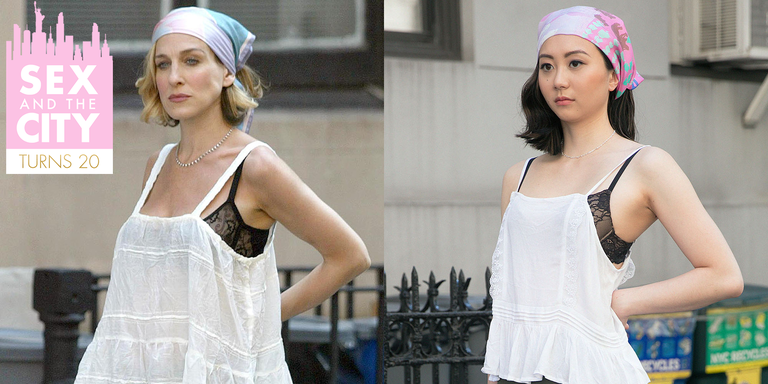 To celebrate the 20th anniversary of Sex and the City, our sex and relationships editor Carina Hsieh (who also lived like Carrie Bradshaw for a week) will write one column each day in the style of Our Lady of Manolos. We couldn’t help but wonder: What would Carrie’s beloved New York Star column look like in the age of Tinder and ghosting? It’s hard to say, but Carina Bradshaw’s got a few ideas. For her second column (read her first one here), Carina and a self-described Miranda see if Fleet Week is everything Carrie and company said it would be.

For one glorious week every year, sailors dock in New York’s friendly harbors and also park their ships at our piers. It was during this special time that my friend Jiranda* and I, armed with the unrealistic expectation that only several rewatches of a 20-year-old show can bring, went traipsing through midtown in hopes of crashing a Fleet Week party.

“I’m not attracted to sailors,” Jiranda told me. Her father had been in the Navy, so obviously, dating a sailor was off-limits. We all have daddy issues, but I told her that dealing with them by avoiding them like that isn’t dealing with them at all. My father was also in the military, but we have so many other issues that the authority thing has never bothered me. Instead I like to spiral into deep depressive episodes every few years and air my personal laundry out for the whole world to read because someone was never proud enough of me.

Anyway, Jiranda was recently single and looking for a rebound. I’d met up with a few sailors for an interview earlier in the day, and when a few of them asked for my number and some good NYC recommendations, I took the bait, thinking this would be the perfect way to coax Jiranda out of her shell.

Soon enough, Jiranda and I found ourselves walking down Eighth Avenue with a harem of sailors trailing behind us. Feeling tipsy on watered-down Jack and ginger, I sidled up next to Marco, a cute sailor with a mustache and kind eyes.

“Am I crazy, or are you into Jiranda?”

He blinked at me.

“I think you’d look cute together, you and my friend.”

He took a beat before adding, “I’m going to go peel back and intercept.”

Something about the way he spoke of his plan of attack opened up a jealous fissure inside me. I was happy for Jiranda — truly, I was. But watching it all unfold in real time — Marco merging into her line of sight to talk to her, Marco steadying her when wayward tourists wandered into her path — made me sad. Was I third-wheeling? Could you even third-wheel if you had started out as a wing woman?

Once we arrived at the next bar, I felt bitterness calcifying in my stomach every time I caught a glimpse of Jiranda and Marco laughing and drinking.

A hater? In this economy? I was in.

He introduced himself as Ricky, a 21-year-old Naval Academy student who was not feeling the vibe.

Ricky was chill in a way that came across as totally hot, even though he was probably just bored. You know the type — hands in pockets, back leaning against the wall. The kind who can make looking like a loner seem sexy. When I stand alone at a bar, I look like a lost baby bird who can’t kick it in the wilderness, but Ricky looked like the star of a CW teen drama.

Can you third-wheel if you start out as a wing woman?

Over at the bar, Jiranda and Marco were still chatting, with Marco’s arm around Jiranda’s waist in a very “that’s my girl” way that made my heart melt. (It also made me want to sleep with Jiranda’s brother out of spite, but only for a minute.)

I had to get out of there. Ricky and I wound up taking an Uber back to my apartment, where he told me all about how he was still pining for ex. As cutting as it was to hear another dude lay his romantic problems on me, I was honestly just stoked for the company. He was out past curfew and I figured he could sleep on my couch if he promised to wake me up for work.

“I feel like I’ve known you forever,” he told me at one point.

I took a humiliating amount of pride in being complimented for my conversational banter, because when you’re feeling ugly and invisible all night, the fraying thread of hopeful arrogance that you might reel in your soulmate with your “personality” is really all you have to hold on to.

We stayed up till 2 a.m. talking, pausing only when my dog started to poop on her pee pad.

“It’s funny, I was the same way with my dog,” Ricky said. “I was so proud of him for going in the right spot.”

I couldn’t help but wonder: Had my standards for human connection dropped so much that I was willing to take a shared experience in potty-training puppies as proof of a soulmate?

“You should sleep on my bed,” I told Ricky. “I’ll take the couch.” Something about Ricky made me feel a little bad for him. Plus my sense of self is so fractured that I automatically throw all my own personal needs out the window when I like a guy, hoping that he’ll be so impressed with what a kind, selfless person I am that he falls in love with me.

“Or we could both take the bed,” he said.

*Names have been changed to protect the sailors who protect our nation.