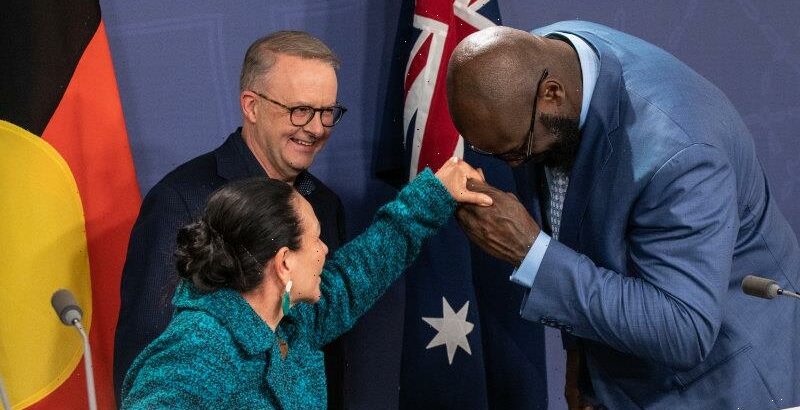 Basketball legend Shaquille O’Neal has lent his support to the Indigenous Voice to Parliament after meeting with Prime Minister Anthony Albanese and gatecrashing his press conference.

The man, universally known as Shaq, met Albanese and Indigenous Affairs Minister Linda Burney in Sydney on Saturday, but he wasn’t supposed to take part in their press conference. 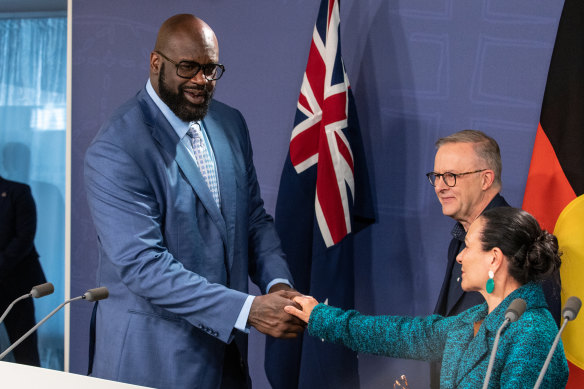 As Albanese was making introductory remarks, O’Neal went on stage and shook the prime minister’s hand.

“Congratulations to you guys and I want you to know that Shaq loves Australia,” the former NBA star said.

“I need you to give me that clearance too,” Shaq said as he walked off the stage, referring to a boomerang that Burney had given him moments before.

“That will be done,” Albanese said. “Linda presented Shaq with a boomerang that may well need some special customs [clearance] to let through.” The ‘killer’ boomerang was made especially for O’Neil by 25-year-old indigenous artist Josh Evans.

O’Neal asked to meet Albanese, and following their meeting has agreed to make a series of videos in support of enshrining an Indigenous Voice to parliament in the constitution.

The addition of star power to the Voice campaign comes after weeks of the government being relatively quiet on the proposal, allowing people such as Coalition Senator Jacinta Nampijinpa Price to raise their concerns about the proposal being a symbolic gesture that could divide Australians.

Albanese has set the goal of holding a referendum as early as next year to establish an Indigenous Voice in the constitution.

He said part of the push would involve getting sporting figures on board including from the AFL and NRL, as well as O’Neal.

While conceding O’Neal wouldn’t be across Australia’s constitution, Albanese pointed out that the 216-centimetre celebrity does extensive work in the United States promoting social justice and lifting people up who are marginalised.

“Quite clearly he is a global figure – he is a big figure in all ways,” Albanese said.

“What he does know and what the world knows is about the gap that is there between Indigenous and non-Indigenous Australians in life expectancy, in health outcomes, in education, in housing, in infant mortality. The world knows about these issues.”

Albanese said he was concerned that the rhetoric could get increasingly divisive during the campaign for the Voice.

“Of course we are concerned, but the truth is, inappropriate comments have been a feature of, unfortunately, from time to time, including from political representatives, towards Indigenous people over a long period of time,” he said.

“And I think some of the comments that have been made about this debate are ill-advised. But it is also such an opportunity to bring the country together.”

The prime minister said similar comments were made prior to Kevin Rudd’s historic apology to the Stolen Generation in 2008, but none of the fears were realised.

“There was an argument put that it would be a divisive moment,” he said.

“The truth is, I look back at the footage now of kids at school … watching on big screens that unifying moment for our country, and I was proud to have been part of it, it was the proudest moment I have had in parliament,” he said.

“I believe this will be exactly the same, it will be one where people look back and go: ‘Why didn’t we do it before?’

“There is no downside, only upside, and it is an opportunity to bring the country together.”