‘This is going too far!’ Disgusted shopper spots caramels flavoured with sea salt and VINEGAR on sale at Marks & Spencer – so would YOU eat them?

Just when you thought the salted caramel craze was dying down, Marks and Spencer has unveiled its latest snack-related spin on the trend.

The supermarket is now selling caramels infused not only with sea salt – but also with vinegar.

A horrified shopper who spotted a box of the caramels on the shelves during his weekly shop snapped a photo and posted it on Reddit, where it was met with a mixture of outrage and delight. 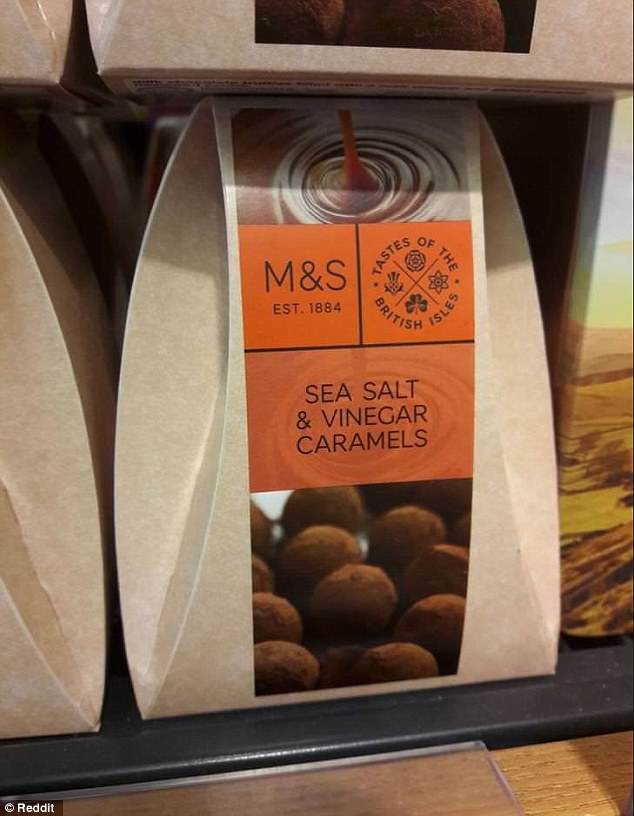 The product is on sale for £5 for a 125g bag in the brand’s Taste of the British Isles range.

It was spotted in a branch of M&S by Reddit user Howdy-doo, who accused the shop of ‘taking this salted caramel thing too far’.

And plenty of Reddit users were in agreement, saying the combination of flavours should not be mixed.

‘ICK. No way. I love all of this, but not in chocolate!’ another said.

The snacks have divided Reddit users, with many saying it was proof that the salted caramel craze had ‘gone too far’

A third wrote: ‘Bet it costs as much as my council tax. Nah, A single Boost for me, mate.’

But others said they loved the sound of the caramels and were keen to try them out.

‘I want to try them. I don’t even care if they’re weird,’ one said.

Another joked: ‘Nothing is too far when it comes to salted caramel.’

However, others who had more adventurous eating habits said they were desperate to try them

M&S today revealed that it will close 100 stores across the UK in the next four years – up from 60 six months ago.

The closures will mainly affect its larger clothing and home stores, which have under performed for several years, but bosses say the move is ‘vital’ for its survival.