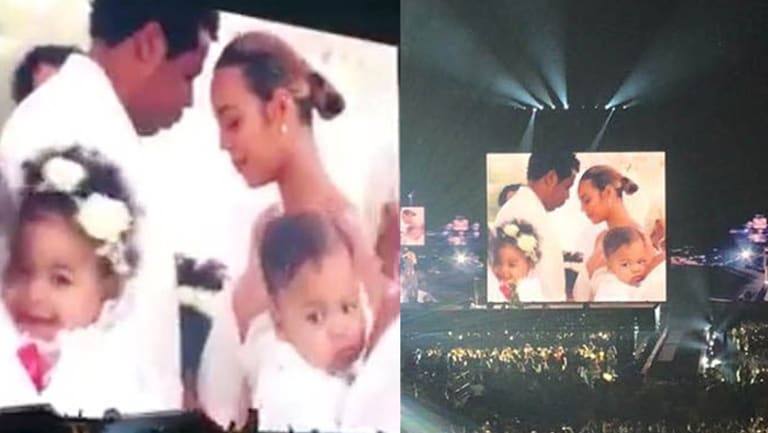 A video display of Beyonce and Jay Z appearing tro renew their vows in front of their twins, Rumi, and Sir.

Beyonce Knowles Carter did the world a solid favour this week by unveiling her twin babies, Rumi and Sir, for only the second time since their birth a year ago. The one-year-old twins, rumoured to be descendants of Zeus and a bar of solid gold, were displayed as part of an extended video montage during the opening night of Beyonce and Jay Z's On the Run II world tour –  in Wales, of all places.

But back to the most aspirational couple of our time, who managed to expertly weave the greatest hits of their personal life into their song performances, including footage of a vow-renewal ceremony in which the twins were present, along with their first-born, Blue Ivy, 6.

It is the sort of cultural high note we've been longing for since, well, since Beyonce stormed Coachella. It's also one which we, the congregation of Beyonce fans, will pick over for years to come, analysing everything from the blindfolds at the commitment ceremony, to Jay Z's youthful afro.

Yes, there will always be those who will accuse the Carters of exploiting their personal life, but as anyone with more than 1000 followers on Instagram will tell you, it's not about protecting your personal life, so much as deciding when you'll drip-feed it to your adoring public.

So it follows that the cultural metabolisation of the Carter family's creative output has been positive. Some might label it worshipful, and this is a fair call, considering we have so few public identities left to like.

But if there is one thing pop culture has taught us, it's that the reaction won't be positive for very long. Oh, you might say, yes, of course, right wingers, racists, dags – those who believe they are above super-stardom simply because it comes to us through the medium of pop music, will pretend they are outraged – or bored.

But I'm not talking about them. I'm talking about us, the ones who claim to have unwavering love for the Carters. There will come a day when we will scrunch up our collective nose at their performative display of family rituals, Gucci-themed costumes and artfully manicured flower crowns. We will most likely feel a mixture of pity and outrage that Beyonce was so forgiving of her husband's infidelities, as if by blaming her for his wrongdoing we can excuse ourselves from forgiving him, too.

I know this because 20 years ago this week there was a woman everyone (yes, even a few men) claimed to be enamoured by and worshipful of. It wasn't just her persona, it was her clothes, friends and lifestyle,too. And now? 20 years later, Sex and the City is regarded with the same level of soggy fondness you might reserve for that spineless ex who said he only liked Charlotte because she was the prettiest when you both knew it was because she was the most patriarchal-friendly. 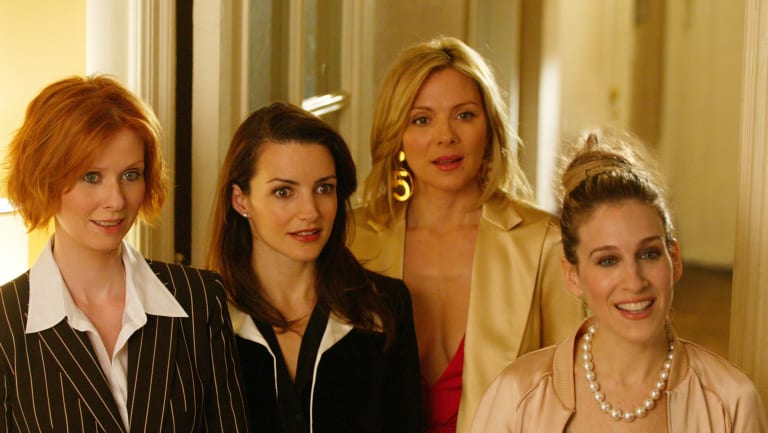 How lame! Oh, we all know now that Miranda is the only smart one! Oh, those oversized corsages and cringeworthy puns! Oh the Magnolia Bakery – how frightfully Basic! They acted as if it was a feminist show but all they ever did was chase men!

OK, now, let me say, in the parlance of the great and powerful Beyonce, "hold up!", because we need to iron out a few wrinkles in this worn-out narrative about the show that everybody suddenly decided was beneath them.

First, the central thesis of Sex and the City was not liberation from men, but frustration with them. Please remember, this was before "hook ups" became part of mainstream discourse; before women were allowed to have  friends with benefits. In 1998 it was expected that if you were over 25 and not married, you were occupying the shadowlands of feminine desirability, flying dangerously close to spinsterhood.

Then, let us remember it was a show about waiting for men to grow up or own up to their foibles. So when the women  – imperfect though they were – settled down with them, it was because the men, and in particular, Mr Big, admitted they were in love and ready. This was not a betrayal of the original premise, or, as some have said, a betrayal of feminism itself. It was called Sex and the City, not Women Alone and Wishing to Remain Single in the City.

And yet, like so much of what floats past us on our screens these days, it has been turned over and analysed, before being discarded as a white, hetero-normative pean to Capitalistic structures, a reductive portrayal of hollow consumerist privilege, that almost literally glossed over the reality of what it was to be female in a city deliberately designed to benefit rich white men.

Of course, this is all true. But, as anyone who has visited New York before income inequality turned it into a bread barn, might say, something can be both good and bad for you at the same time.

And, I can't help but wonder, how the devotees of Queen Beyonce will come to condemn her 20 years from now. Will they call her exploitative? Tacky? Lame?

Or will we have reached a new stage where condemnation and contrariness for its own sake is deemed passe?

One can only hope.